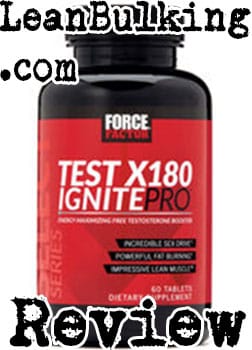 Test X180 Ignite Pro is a testosterone booster supplement made by Force Factor. It costs $79.99 on GNC.com, making it one of the more expensive products on the market, so we have high expectations for it.

This seems to be an upgrade on their previous test boosters, Test x180 and Test x180 Ignite. So itll be interesting to see whether its been formulated better than them or if its a step back.

Well analyze Test x180 Ignite Pros nutrient profile for you in the next section. But first, well tell you more about the company behind it.

Force Factor is building a great supplement portfolio and have asserted themselves as a respected company. While they might not be as well known globally as Optimum Nutrition and MuscleTech, they certainly have a big fan base in the USA.

One thing weve noticed is that theyre not afraid of putting a big price-tag on their supplements. They seem to want to compete directly with the big boys of the industry and go head-to-head with premium product bestsellers, which we respect. But we also always have big expectations for their products because they cost a lot.

They also released another T-Booster in mid-2018 named Alpha King Supreme. But along with an increasing number of testosterone boosters, Force Factor has gained quite a good reputation for their other supplements too; fat burners such as LeanFire Ultimate have become popular in retailers like GNC, Bodybuilding, and Amazon.com.

However, youre here to learn more about Test x180 Ignite Pro. So lets see which ingredients have been added to this T-Booster below…

Test x180 Ignite Pro contains 9 main ingredients, which is a good number to have; in our experience, weve found that T-Boosters containing over 10 nutrients are often under-dosed.

From first glance, were glad to see that Force Factor has done their research and included some key testosterone raising ingredients such as Vitamin D3 and Fenugreek Seed Extract.

However, there are some slightly unnecessary additions such as Caffeine Anhydrous. In fact, the whole fat burning matrix is unnecessary in our honest opinion, as we believe that you should buy a specialist fat burner supplement if youre main aim is to shred body fat.

Not only that, a benefit of raised testosterone levels is that your body will naturally lose body fat around your belly and other unwanted areas. So we do believe that Force Factor should have stuck with tried-and-tested nutrients to boost your T-Levels, instead of making this a hybrid supplement thats designed to act as a fat burner too.

Anyway, well take you through each ingredient in Test x180 Ignite Pro. By the end of this review, youll have a good idea of how safe and effective this test booster really is. 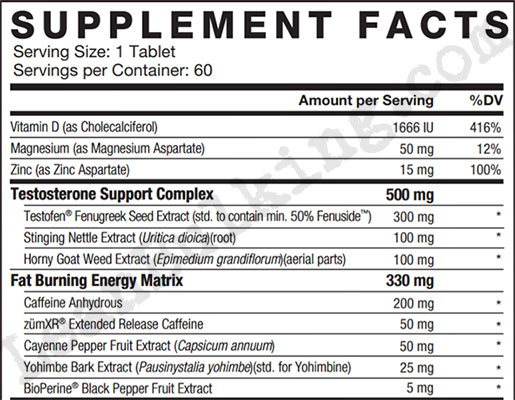 Theres a reason why people are generally happier in the sun; theyre exposed to higher levels of Vitamin D3.

Why? Well, Vitamin D3 is known as the sunshine vitamin, as its synthesized by your skin after being exposed to sunlight. So as your body creates it, this nutrient is technically classed as a hormone too.

As well as improving your mood, Vitamin D3 is important in strengthening your bones and has also proven to boost your testosterone levels in amounts equal to or higher than 3,332IU daily.

The bad news for Test x180 Ignite Pro is that it only contains 1,666IU of Vitamin D3. This means that Force Factors T-Booster contains a seriously under-dosed amount of Vitamin D3, which isnt likely to improve your T levels.

Fenugreek Seed Extract has been used for decades in ayurveda (traditional Indian medicine) for improving your testosterone levels and libido. For this reason, we always consider this nutrient to be a key addition to any testosterone booster - good work by Iron Labs here.

If youve ever walked through a field and felt stung by plants, then youll have been exposed to Stinging Nettle. Makes sense, due to its name right?

Well, now that weve given you an absolutely useless and obvious fact, well tell you something more useful. Stinging Nettle Extract has quite varying studies in terms of raising your T levels; some studies prove that it works, whereas some studies show that it can be unreliable.

The good news is that Stinging Nettle Extract hasnt shown to cause any side effects. So if it doesnt work, its not going to be an issue. But if it does, then everyone is happy.

Ultimately, Stinging Nettle Extract can be a great addition to a test booster and is definitely better than a lot of nutrients in Test x180 Ignite Pro. But its not the most reliable either.

Theres a pretty interesting story to how this herb got its name; farmers found that goats eating it experienced higher libido, which led to studies to see whether it had the same effect on humans.

Were not sure why Force Factor has added Caffeine Anhydrous to Test X180 Ignite Pro. While this stimulant is great for raising your energy levels, its much more useful in pre-workouts and fat burner supplements.

Ultimately, Caffeine Anhydrous hasnt shown to be useful for raising your testosterone levels. And as Test x180 Ignite Pro is a T-Booster, we cant consider it to be a necessary addition here.

Now, if youre main aim is to lose body fat, then you should be looking at specialist fat burner supplements. So we dont believe that Cayenne Pepper Extract is necessary here; we would have preferred to see something more useful at boosting your T levels, such as D-Aspartic Acid.

So not only is this an unnecessary addition to Test x180 Ignite Pro in our honest opinion. But it also increases your risk of suffering side effects too.

In case youre wondering, BioPerine is a patented form of Black Pepper Extarct.

What does it do? Well, it contains a concentrated amount of piperine, which has shown to improve the bioavailability of other ingredients that its consumed with. In plain English, that means that it boosts the absorption rate of supplements.

As a result, while Black Pepper Extract doesnt have any effect on your T levels, its definitely a useful bonus addition to any product. 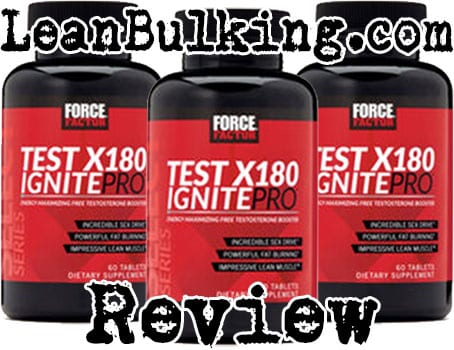 There arent many ingredients that can cause side effects.

In fact, the only real concern we have with Test x180 Ignite Pro is that it contains Yohimbe Bark Extract; as we mentioned, this has caused numerous issues with users in the past.

Apart from that, Test X180 Ignite Pro has been formulated safely.

Here are the potential side effects of taking Test X180 Ignite Pro:

Overall, Test X180 Ignite Pro seems like a unique testosterone booster. Our honest opinion is that it probably isnt worth its massive $79.99 price tag, but its certainly not the worst test booster weve seen on the market.

However, we dont quite understand the necessity of nutrients such as Caffeine Anhydrous, Cayenne Pepper Extract, and Yohimbe Bark Extract. As we mentioned throughout this review, if your main aim is to lose body fat, then choose a fat burner supplement instead.

Now, we dont have a massive issue with hybrid products. But as this is clearly named Test X180, most people that dont know much about nutrition would assume that its main benefit is to raise their testosterone levels.

For this reason, we believe that Force Factor should have added more ingredients that are tried-and-tested to boost T-levels, instead of stimulants and thermogenics.

However, the addition of Yohimbe Bark Extract has slightly ruined this product and increased risk of side effects in our honest opinion.

As a result, we dont believe that Test X180 Ignite Pro cant compete with the highest rated test boosters available right now at a similar price.