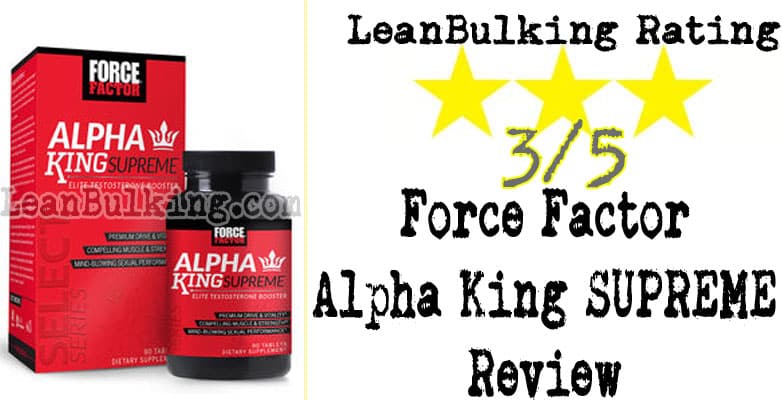 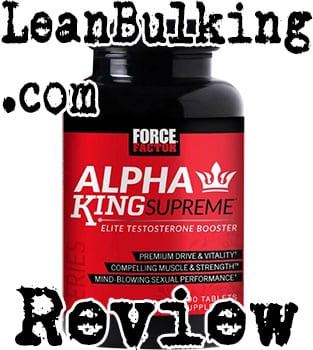 Alpha King SUPREME is a testosterone booster supplement made by Force Factor. It was released in Mid-2018 and is hoping to ride on the back of Force Factors Alpha King prequel to this product.

Ultimately, Force Factor have done very well to assert their position in the market. So its clear to see that they produce respectable supplements, but well be looking at whether Alpha King SUPREME can compete with the best test boosters that are already dominating.

To do this, well analyze Alpha King SUPREMEs nutrient profile for you in the next section. But first, well tell you more about the company behind it.

As weve already mentioned, Force Factor have built a great reputation in the supplements industry already. The prequel to this test booster, Alpha King, gained many fans, so theyll be expecting nothing but perfection from this sequel, Alpha King SUPREME.

They have a fat burner thats also performed reasonably well on the market called LeanFire ULTIMATE. But youre here to learn more about their release in Mid-2018; so lets see which ingredients have been added to Alpha King SUPREME below…

Alpha King SUPREME contains 11 ingredients overall including minerals and vitamins. But out of those, we consider 8 of them to be its main additions; this is a good number to have, as we usually find that test booster supplements containing more than this number are often under-dosed.

From first glance, were pretty happy with what we see. Vitamin D3 is arguably the best nutrient at boosting your testosterone levels, so its great to see that Force Factor has added an optimal 3,333IU dosage (along with Vitamin K2, which is essential to consume when supplementing Vitamin D3).

However, along with the positives, there are a few negatives too. Such as the unnecessary addition of L-Citrulline, which could have been replaced by something more relevant in a test booster.

Anyway, well expand on this as we take you through each ingredient in Alpha King SUPREME. By the end of this expert review, youll have a good idea of how safe and effective this T-Booster really is. 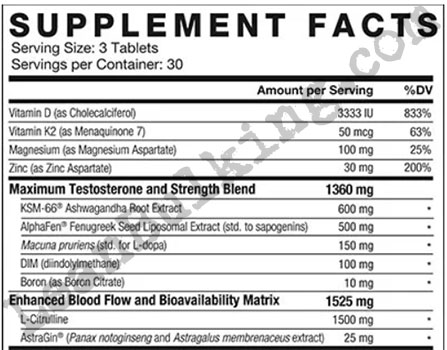 Many experts (including us) believe that Vitamin D3 is the single most beneficial nutrient to supplement for good reason - it boosts your mood, health and testosterone levels.

How does it work? Well, its well known that many are happier in the sun; this is because Vitamin D is synthesized from sunlight naturally by your body after your skin is exposed to it.

However, as most of us work in offices and not on the beach in Florida, you wont get as much Vitamin D as you should be getting naturally.

Heres where natural test boosters containing Vitamin D3 come in. Vitamin D3 is the most bioavailable form of Vitamin D3, so your body is able to use it very efficiently (Vitamin D2 is known for being less bioavailable to Vitamin D3).

Studies have shown that the optimal dosage of Vitamin D3 to supplement is 3,332IU-5,000IU. You can see the study that proves this here: https://www.ncbi.nlm.nih.gov/pubmed/21154195

Ultimately, were very glad that Force Factor have done their research here.

Ashwagandha has been used for decades in Ayurveda (traditional Indian medicine). Its found to be useful for improving your power output in studies. But the bad news is that its not shown to have any effect on your testosterone levels.

Ultimately, while Ashwagandha is a useful bonus in T-Boosters, its not going to be a key addition to any supplement.

Fenugreek Seed Extract is definitely well suited to testosterone boosters; this ingredient has shown to raise your test levels, and libido too.

Ultimately, when taking T-Boosters, youre wanting both of the benefits that Fenugreek Seed Extract delivers. So great work by Force Factor by adding this herb here.

Macuna Pruriens is also known as velvet bean due to its furry texture. Dont worry though, you wont feel this due to it being ground down to a powder!

The good news is that Macuna Pruriens has shown to have positive effects on your testosterone levels. So again, this is another good addition to Alpha King SUPREME here, and its also seen in one of our favorite T-Boosters called Prime Male too.

While Macuna Pruriens isnt as beneficial as Vitamin D3, it certainly has its place in Alpha King SUPREME here.

Also known as diindolylmethane, this is known for being an aromatase inhibitor (meaning it helps to keep your estrogen levels low).

However, no natural testosterone booster is going to put you at risk from gynecomastia (man boobs). Youll only be at risk from this if you inject yourself with illegal substances, which we dont recommend.

Anyway, as we mentioned, no natural T-Booster is going to raise your T levels to a level where your body begins converting T into estrogen. So basically, DIM isnt necessary in natural T-Booster such as Alpha King SUPREME.

Boron is an essential mineral thats known for helping to support healthy testosterone levels. But this is only if you supplement it when you have low levels; studies only included subjects that had unusually low T levels.

For this reason, were not sure how effective this will be to those with fairly normal T levels already, that is just wanting that extra push to gain more muscle and libido. But you cant deny that Boron is a great mineral to add to your diet regardless.

Were quite confused as to why Force Factor has added L-Citrulline to their test booster, Alpha King SUPREME.

Why? Because its more useful in a pre-workout supplement, due to its ability to enhance your muscle pumps by increasing your blood flow.

Our guess is that Force Factor believe that L-Citrulline will improve the quality of your erections. But there simply havent been enough reliable studies to show this.

In fairness though, theres nothing wrong with including L-Citrulline here either, as its not going to cause any side effects. But we would have preferred something more useful at raising your T levels, such as D-Aspartic Acid.

There are a lot of science-related things that can be said about the formulation of AstraGin. So instead of boring you with that, well just tell you why its added to some supplements.

Basically, AstraGin is marketed as being able to improve the bioavailability of supplements; this means that its supposed to make products more effective.

However, AstraGin is still a new addition to supplements - especially compared to creatine monohydrate and others that have been around for decades. So there simply arent enough non-bias studies to prove whether it works or not (in our honest opinion).

For this reason, we consider this to be an unreliable addition. But theres also no negatives to having this in Alpha King SUPREME, as its not been reported to cause any side effects. 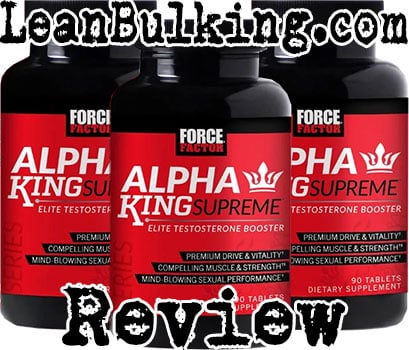 One of the best things about Alpha King SUPREME is that it doesnt contain any questionable ingredients that might cause side effects. For example, Tribulus Terrestris has become known for its potential to cause prostate enlargement, so were personally glad that Force Factor didnt include this.

So overall, we dont think that youll be at risk of suffering any side effects with Alpha King Supreme. Very good job by Force Factor with regards to this.

Weve mentioned throughout this review that Force Factor has created an extremely respectable product with Alpha King SUPREME. Any site is lying to you if they say otherwise.

You simply cant argue with the fact that Alpha King SUPREME contains an optimal dosage of Vitamin D3, which is quite rare to see. Also, it contains some other key T-Booster nutrients such as Fenugreek Seed Extract.

However, there are a few unnecessary additions such as L-Citrulline and Ashwagandha, which have no effect on your T levels at all. So we would have liked to see more suitable replacements for those that actually benefit your testosterone levels.

So overall, there are only some small issues with Alpha King SUPREME. Otherwise, its certainly better than many other T-Boosters weve seen on the market.

Alpha King SUPREME has a lot going for it, and we can see why youre interested in this product.

Its probably worth trying at some point, but personally, the small issues mean that it cant compete with the highest rated test boosters on the market right now.