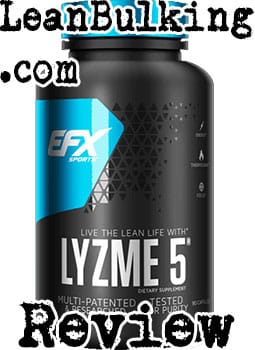 From first glance, it looks to be a respectable fat burner; it contains some key thermogenic nutrients such as Cayenne Pepper Extract. But on a negative from our point of view, it contains 2 sources of stimulants, which increases your risk of jittery side effects.

Well expand on this as we analyze Lyzme 5s nutrient profile in the next section. But first, well tell you more about the company behind it.

Who Is EFX Sports?

EFX Sports are best known for their patented form of Creatine Monohydrate Kre-Alkalyn, as well as their pre-workout, Training Ground PRE.

Theyve built a name for producing honest supplements. And we really respect that they try to provide honest products that dont deceive anyone. But if were being honest, we dont quite believe that theyve managed to compete with the likes of Optimum Nutrition and MuscleTech in terms of reputation.

Anyway, that doesnt matter while looking at their fat burner released in 2018, Lyzme 5. So lets see which ingredients have been added to this product below…

Lyzme 5 contains 10 main ingredients overall, which is on the border of what we consider to be acceptable; from experience, we believe that supplements containing more than 10 nutrients are often under-dosed.

From first glance, it seems like EFX Sports have spent most of their budget on dosing Lyzme 5 (the ingredient) well.

In fairness, this makes sense, as the whole product is named off this 1 ingredient. However, were concerned that tried-and-tested thermogenics, such as Cayenne Pepper Extract, have been under-dosed.

Anyway, well expand on this as we take you through each nutrient in EFX Sports Lyzme 5. By the end of this review, youll have a good idea of how safe and effective this fat burner really is. 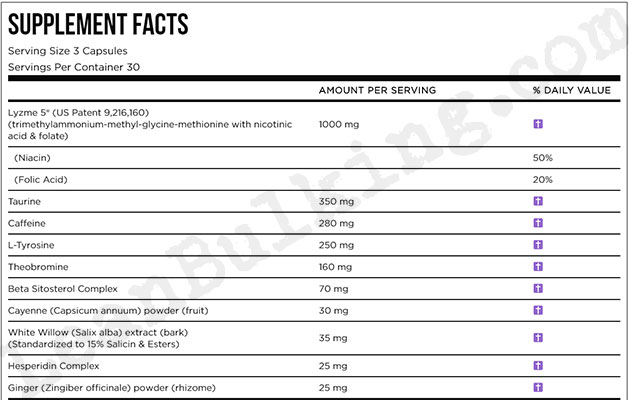 In case youre wondering, this is the ingredient that EFX Sports has named this fat burner after. Its basically a patented form of Trimethylammonium-methyl-glycine-methionine with nicotinic acid & folate.

Youre probably thinking to yourself what the f*ck did you just say?!. So in simple terms, its an ingredient that EFX Sports have put together and made sure that no other company can copy.

As Lyzme 5 is a fat burner supplement, it shouldnt come as a surprise that this ingredient is designed to promote fat loss. However, while EFX Sports are confident in its ability, there havent been enough reliable studies to prove that its reliable at this moment in time (in our honest opinion).

*Update* Weve received information from Dr Jeff Golini of EFX Sports that Lymze 5 is able to break-up body fat and transport it via the bloodstream; this is believed to encourage your body to burn fat for energy. So apologies if we misunderstood this ingredient, it certainly sounds capable of packing a punch!

We would still like to keep an eye on future clinical studies so the effectiveness of this nutrient is re-inforced in the future.

Even those that dont know much about supplements will have heard about Taurine before; this is because its commonly found in energy drinks.

Not only that, due to its presence in energy drinks, Taurine is also mistakenly believed to be a stimulant. However, Taurine has no effect on your energy levels.

So what does it do? Well, Taurine has shown to be capable of preventing cramping during exercise, so it can be a useful bonus addition to a pre-workout supplement.

Unfortunately, though, we dont consider this to be a necessary addition to EFX Sportss fat burner, Lyzme 5, as it has no effect on fat loss. We would have much preferred to see a more useful nutrient such as Green Tea Extract here.

When it comes to raising your energy levels on a cut, Caffeine is definitely a great option - as long as you dont consume too much at once.

The good news is that EFX Sports has added a pretty good dosage of Caffeine per capsule; Lyzme 5 has an overall Caffeine dosage of 280mg, which split into 3 capsule servings, equals around 93mg per serving.

So were pretty confident that Lyzme 5 will offer enough of a kick while you cut calories (and potentially carbs) from your diet in order to lose body fat. But saying that, we probably wouldnt recommend consuming much coffee or tea while taking Lyzme 5 either, or risk suffering jittery side effects.

L-Tyrosine is a brain booster ingredient, so its better suited to nootropics and pre-workout supplements. But as an improvement in cognition isnt the main reason for buying a fat burner, we dont think this is a necessary addition to Lyzme 5.

Ultimately, we would have preferred to have seen a thermogenic nutrient instead here. Something like Green Tea Extract thats tried-and-tested to promote fat loss would have been an ideal replacement for L-Tyrosine in Lyzme 5 here.

We mentioned earlier that EFX Sports had done well to dose Caffeine well in Lyzme 5. But theyve slightly ruined things by adding another stimulant in the form of Theobromine; this stimulant alongside Caffeine increases your risk of suffering jittery side effects and energy crashes.

For this reason, we prefer to consume fat burner supplements that only contain 1 stimulant in a sensible dosage - to stay safe.

We must be getting old and behind the times, because this is the first time that weve seen Beta-Sitosterol Complex in any fat burner.

What is it? Well, Beta-Sitosterol Complex is known for being beneficial for prostate health in men. Some studies have even shown that it might help to fight against hair loss too.

However, one thing that Beta-Sitosterol Complex simply isnt proven to do, is promote fat loss. And as Lyzme 5 is a fat burner supplement, it simply isnt a reliable addition to help you shed body fat here.

Finally, a thermogenic nutrient thats shown to work! You cant argue with this one. Try eating a Cayenne Pepper and see what happens - your mouth will start burning, which is the same effect that most chili peppers have.

Why? Because chili peppers such as Cayenne Pepper contain high amounts of capsaicin, which is responsible for their spice. Now, capsaicin has proven to boost your metabolic rate, helping you in the battle to lose body fat and get shredded.

But the bad news is that EFX Sports has slightly under-dosed Cayenne Pepper Extract in Lyzme 5. Theres only 30mg in this fat burner, while a dosage of around 100mg is more effective in our honest opinion.

Weve seen this added to a few fat burners in the past, but were never quite sure why.

White Willow Extract contains a salicin, which is believed to be quite similar to aspirin, so its supposed to be pain-reliving to a degree. It also contains natural anti-inflammatory properties too, which might benefit your health in a similar way to turmeric.

However, there hasnt been enough studies to show that White Willow Extract can promote fat loss. So we consider this to be an unreliable addition to Lyzme 5 here.

In case youre wondering, Hesperidin is a flavonoid naturally found in orange peels. Its believed to help improve blood circulation and might even have brain-boosting properties too.

However, studies have failed to show that Hesperidin has any effect on fat loss or cholesterol levels; a study by Demonty et al is probably the most significant.

For this reason, we dont believe that Hesperidin is a good addition to Lyzme 5 here. A proven thermogenic such as Green Tea Extract would have definitely been more beneficial.

This is the same ginger that youve cooked with and added to your meals. This nutrient has natural anti-inflammatory properties and has even shown to help treat the common cold too. So you cant argue that Ginger is good for your general health.

Now, the fact that Ginger is being added to fat burners is interesting; there have been studies that have shown it to be capable of inducing thermogenesis. But in the same studies, it had no effect on total resting energy expenditure, meaning it didnt really promote fat loss.

For this reason, Ginger is highly unreliable in our honest opinion. As we mentioned before though, Ginger is definitely beneficial to your general health, so its a useful bonus addition to Lyzme 5 here. 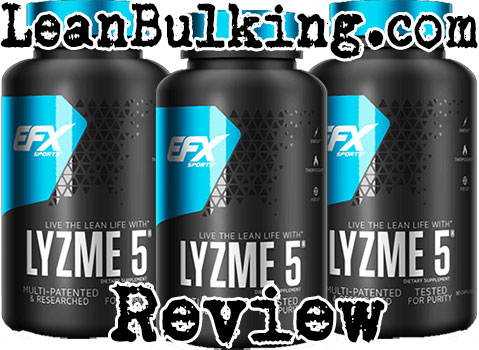 Not much is known about the ingredient Lyzme 5, so were unable to confirm whether it causes any side effects at the time of writing this review.

However, one thing that concerns us personally, is that EFX Sports Lyzme 5 contains 2 stimulants; this increases your risk of suffering from jitters and energy crashes. So we always try to choose fat burners that contain only 1 stimulant in a sensible dosage.

Here are the potential side effects from taking Lyzme 5:

Lyzme 5 is clearly a respectable fat burner from a respectable supplements company. Well be keeping an eye on whether there are more studies conducted on the patented ingredient, Lyzme 5.

However, for now, were unable to state whether Lyzme 5 (the ingredient) is a reliable fat burning nutrient. This is a problem, as this is the highest dosed nutrient in EFX Sports fat burner Lyzme 5 (which makes sense, since this product is named after the ingredient).

There are some positives though. Cayenne Pepper Extract is included, which is a proven thermogenic, while Ginger is known for its health-boosting properties too.

Dr Jeff Golini was personally able to offer some help in understanding EFX Sports Lymze 5 ingredient, which was extremely appreciated. Its great to see companies actively engaging with their fans and providing clarity on issues, and long may this continue.

Lyzme 5 certainly sounds capable of encouraging your body to burn fat as energy. But we would still like to see clinical studies that proves this ingredients effectiveness to make it concrete (in our honest opinion).

We also believe that this fat burner supplement is also lacking key thermogenic nutrients such as Green Tea Extract too.

For these reasons we dont believe that Lyzme 5 can compete with the highest rated fat burners available right now, but it certainly holds its own in a crowded market.