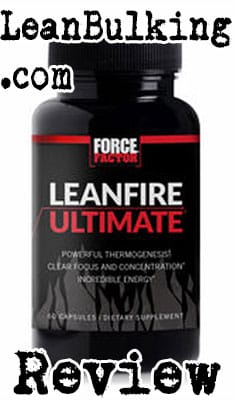 LeanFire Ultimate is a fat burner supplement made by Force Factor; priced at $79.99 for 30 serving containers on GNC.com.

If youre thinking this is expensive…its because it is. In fact, this makes LeanFire Ultimate one of the most expensive fat burners that weve reviewed.

But it hasnt got a good serving size; the best serving size is 3-4 capsules per day (this keeps your body fuelled with key nutrients needed to burn fat throughout the day). As LeanFire XT only comes with a daily serving size of 2 capsules, this will only fuel you for 3-4 hours (which means its not great value for money).

Anyway, well tell you more about the company behind LeanFire Ultimate, before analyzing this fat burners nutrient profile.

Who Are Force Factor?

According to their website, Force Factor was founded by 2 college rowers (from Harvard) in 2009. Since then, theyve managed to build a good reputation (especially with their test booster Test X180).

Theyve even won an awarded given to them by GNC.com (the Rising Star Award). However, they havent managed to reach the level of Optimum Nutrition yet.

Anyway, were here to review their fat burner, LeanFire Ultimate…which is what well do below.

Another good thing from first glance - LeanFire Ultimate doesnt contain any proprietary blends (meaning you can see the exact dosages of each ingredient).

Anyway, well take you through each ingredient inside this fat burner; so you can see how effective LeanFire Ultimate really is. 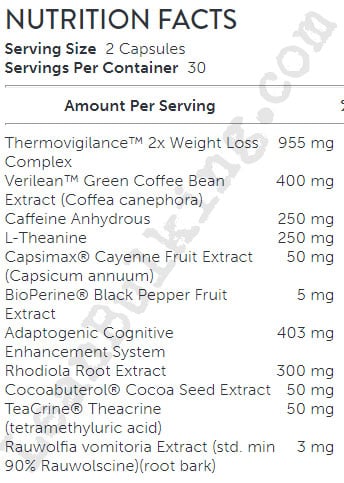 In case youre wondering what this is; Green Coffee Beans are basically just unroasted coffee beans.

However, they contain high amounts of chlorogenic acid thats proven to raise your metabolism (this is why Green Coffee Beans are known as a thermogenic).

For this reason, this is one of our favorite ingredients in fat burner supplements. Its been dosed quite well (optimal dosages are 500mg per serving), so not a bad job here by Force Factor.

Again, if youve not bought supplements before, you might not know what Caffeine Anhydrous is - but its very simple (its basically just dehydrated Caffeine in powder form so it can be added into supplements).

Caffeine Anhydrous is the best stimulant you can find in fat burners; its great for raising your energy levels while your cutting calories for fat loss.

But you need to check for the dosages of this in supplements - big dosages (over 100mg per capsule) can cause side effects such as jitters and energy crashes.

Unfortunately, Force Factor LeanFire Ultimate contains 125mg Caffeine per capsule; meaning you might suffer from these side effects.

L-Theanine is a great addition with Caffeine - in pre-workout supplements. Why? Because its shown to form a smart-caffeine which improves your focus in the gym.

However, a boost in focus isnt really needed with fat burner supplements. For this reason, L-Theanine isnt necessary in LeanFire Ultimate - but it doesnt cause any side effects, so its not bad either.

Now, this is a great ingredient. If youve ever eaten anything spicy, then you know that it can make you sweat; well, this raise in body temperature is what boosts your metabolism (as your body works harder to cool itself down, burning calories in the process.

For this reason, were always happy to see Cayenne Pepper Extract in fat burners - and we consider this a key fat burning ingredients as a result.

Although this is the same stuff you sprinkle on top of your food…Gordon Ramsay loves this stuff (if youve ever watched Hells Kitchen, youll know what were talking about)…

Anyway, this is more useful than you think; Black Pepper Extract is able to improve the absorption rate of other ingredients its consumed with.

Its never a key ingredient in any supplement, it can make a useful bonus ingredient.

Were not sure why this has been added to a fat burner; it can be great in pre-workouts (due to being able to improve your focus in the gym while reducing muscular fatigue).

However, as weve already mentioned; you dont really need these benefits in a fat burner.

Lets be honest, all we want in fat burners are ingredients that promote fat loss, raise your energy levels or suppress your appetite.

The reason why Cocoa Seed Extract is added into supplements, is because it contains a stimulant called Theobromine.

But this is a bad thing; as we mentioned before, LeanFire Ultimate already contains an overdose of Caffeine - so Cocoa Seed Extract only makes it more likely for you to suffer from jitters.

For this reason, we always advise you to stick to supplements containing only 1 stimulant.

Theacrine is another stimulant in LeanFire XT; so this also increases the chances of suffering from side effects such as jitters or energy crashes.

This is a species of tree and shrub thats mainly found in Africa and Asia. However, its not a good addition to LeanFire Ultimate - because its another stimulant.

Again, we probably sound like a broken record player by now…but this also raises your chances of suffering from side effects such as jitters. Not only that, Rauwolfia has also been reported to cause more serious side effects that well list in the section below. 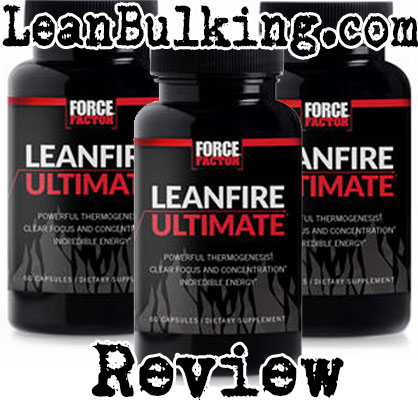 We told you that Rauwolfia is an ingredient we avoid in any supplement. But the large dosages of stimulants are also a big problem; this can cause you to suffer side effects such as energy crashes and jitters (which will ruin your day at work or in college…).

For this reason, we always recommend you to choose supplements containing only 1 stimulant (Caffeine Anhydrous).

Heres the potential side effects from taking LeanFire Ultimate:

As you can see from the list of potential side effects - we wouldnt recommend taking LeanFire Ultimate.

On a positive note - were glad that Force Factor didnt include any proprietary blends (so you can see the exact dosages inside this fat burner).

However, we simply cant justify the $79.99 price tag for LeanFire Ultimate; the highest rated fat burners on the market all cost less than this.

LeanFire Ultimate isnt the worst product weve seen. But in our honest opinion, its not worth its big price tag.

3
Check Out The Best Fat Burners This Year!