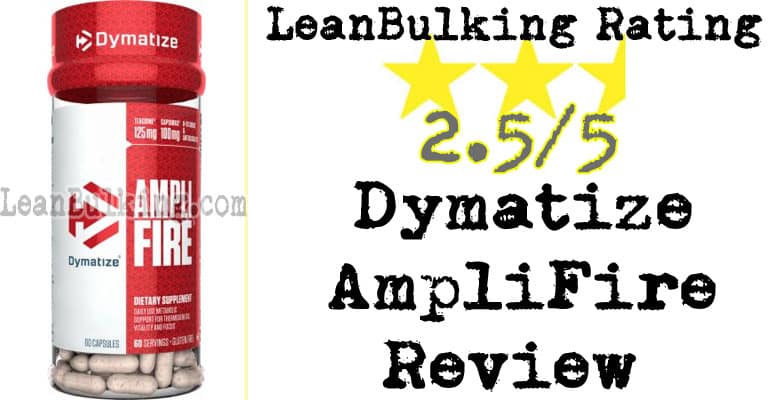 About The Product: Dymatize AmpliFire

Dymatize AmpliFire is a fat burner supplement that was released in 2018. It costs $66.69 on Bodybuilding.com, so it’s certainly priced to compete against the top-end fat burners on the market.

One thing we’re surprised about is that Dymatize AmpliFire only offers 1 capsule serving per day; many studies show that 3-4 servings spread throughout the day keeps your body in fat burning mode, so AmpliFire’s daily serving size isn’t ideal (in our honest opinion).

Also, we’re slightly intrigued by the lack of ingredients in Dymatize AmpliFire. It only contains 3 main ingredients, while most other premium fat burners contain around 5-6.

Don’t get us wrong. We would rather have fewer ingredients that are dosed optimally. But for a product that costs $66.69, we would have expected to see more here.

Anyway, we’ll expand on this as we take you through Dymatize AmpliFire’s supplement facts in the next section. First, though, let’s try and learn more about the company behind this fat burner.

Dymatize is a USA-based supplement company that was founded in 1994. They’ve released quite a few products since then, such as their pre-workout named Dymatize Pre W.O, which we have reviewed in the past.

This company also sponsor some big names in the bodybuilding/fitness industry; some sponsored athletes include Erin Stern, a Ms Olympia Figure champion.

However, you’re here to learn more about their fat burner, Dymatize AmpliFire. So let’s see which ingredients have been added into this product in the section below…

As we mentioned before, we were slightly surprised to see that there were only 3 ingredients added to Dymatize AmpliFire – especially as it comes with its $66.69 price tag.

But one good thing is that it doesn’t contain any potentially harmful nutrients such as Synephrine or Yohimbe. And some more positive news is that Dymatize AmpliFire contains a key thermogenic nutrient, Capsaicin.

But we are slightly disappointed that more thermogenics such as Green Tea Extract have not been added to this fat burner; at the big price tag, we believe that more nutrients could have been added (in our honest opinion).

We’ll take you through each ingredient in Dymatize AmpliFire. By the end of this review, you’ll have a good idea of how safe and effective this fat burner really is.

Caffeine Anhydrous is the best stimulant that you can find in supplements. This is because it’s a pure form, being dehydrated caffeine that’s made into powder form so it can be added to products.

We also believe that Caffeine Anhydrous is a perfect addition to any fat burner.

Why? Because when you cut calories in order to lose weight, you’ll suffer from a slight lack of energy due to it. But Caffeine Anhydrous raises your energy levels and keeps you feeling motivated to work towards those 6-pack abs or bikini beach body.

However, as coffee lovers will know, consuming too much caffeine at once can cause jittery side effects and energy crashes.

As a result, in a fat burner supplement, we prefer consuming under 100mg per capsule serving. The slight issue we have, personally, with Dymatize AmpliFire is that it contains a big 200mg Caffeine Anhydrous dosage in 1 capsule serving.

Just to put this into perspective, 200mg is more Caffeine Anhydrous than some pre-workout supplements that we’ve tried in the past.

As a result, we believe that Dymantize AmpliFire contains a bit too much Caffeine Anhydrous for a fat burner (in our honest opinion).

In terms of stimulants found in supplements, Theacrine is a new-boy on the block that has only been added fairly recently.

It’s believed to be more beneficial than Caffeine Anhydrous, as studies suggest that humans don’t build up a tolerance to it. So the same dosage will always deliver the same results, regardless of usage.

However, the problem we have with this being in Dymatize AmpliFire isn’t down to Theacrine itself. It’s because this fat burner already contains a big 200mg dosage of Caffeine Anhydrous.

So what does this mean? Well, it means that Dymatize AmpliFire has an overall 325mg dosage of stimulants, which is massive. In fact, not many pre-workouts contain this much.

As a result, we believe that Dymatize AmpliFire contains an unnecessary amount of stimulants (in our honest opinion).

In case you’re wondering, Capsimax is a patented form of capsaicin that’s believed to deliver the same benefits as Cayenne Pepper Extract.

But it’s also supposed to not disturb your stomach as much; just for the record, we’ve never had any stomach issues after consuming Cayenne Pepper Extract anyway.

The important thing is that capsaicin is an effective thermogenic that’s proven to work in numerous studies. In fact, just try eating a hot chili pepper and you’ll know that it works because you’ll feel the ‘spice’ that will warm your body temperature.

Well, this increase in body temperature is exactly how it boosts your metabolism; this forces your body to work harder to cool itself down, burning more calories in the process.

As a result, we consider Dymatize AmpliFire to be a key addition to any fat burner supplement. 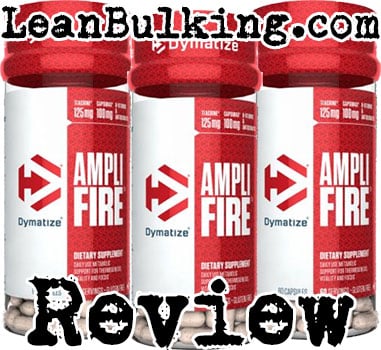 What Are The Best Fat Burning Ingredients Missing From Dymatize AmpliFire?

We might seem like we’ve been slightly harsh about Dymatize AmpliFire so far. But we’re just giving our honest opinion here.

Instead of just leaving you with this information though, we thought that we would justify this review by informing you about which fat burning ingredients we would have liked to have seen in Dymatize AmpliFire.

But apart from being capable of improving the health of almost every organ in your body, Green Tea Extract has proven to boost your metabolic rate; this in turn directly promotes fat loss, which has been shown in countless clinical studies.

So how does it work? Well, Green Tea Extract contains high amounts of catechins. This is what is known for being able to help you lose fat at an accelerated rate.

Why don’t you just drink tons of green tea? Well, you’ll have to consume more than 10 cups of green tea in order to consume an optimal amount of catechins for fat loss. So intaking a few pills of Green Tea Extract is much easier to fit into your lifestyle and gets around the issue of people not enjoying the taste of green tea too.

If you’re looking for a fat burner containing Green Tea Extract, then just make sure that it contains an optimal 500mg dosage.

While Glucomannan does not directly burn fat, it offers a benefit that’s equally as effective.

Basically, Glucomannan is a fiber that’s shown to safely expand in your stomach to help you feel full between meals. So, in effect, this helps lower your calorie intake as you’ll be able to avoid snacks and junk food easier.

Ultimately, we believe that Glucomannan should be an essential addition in any fat burner supplement. But it’s a shame that it’s only seen in premium products on the market.

If consumed individually, the ingredients in Dymatize AmpliFire won’t cause any side effects.

However, this fat burner contains an overall 325mg dosage of stimulants; his will be likely to cause jittery side effects to those sensitive to stimulants. And we would be worried about this, personally, as we prefer to consume under 100mg Caffeine Anhydrous per serving in fat burners.

Here are the potential side effects from taking Dymatize AmpliFire:

We respect that Dymatize AmpliFire does not contain any potentially harmful ingredients. And it’s clear that the company behind it has tried hard to only include effective nutrients in this fat burner supplement.

However, the overload of stimulants Dymatize AmpliFire is simply unnecessary; this is more stimulants than we’ve seen in most pre-workout supplements, which puts things into perspective.

The good news is that CapsiMax is known for being effective at promoting fat loss. But there are many fat burners that contain a much better array of thermogenics, including capsaicin, in our honest opinion.

The overload of stimulants in Dymatize AmpliFire might cause those with a low tolerance to stimulants some side effects.

And for the price of $66.69, you can get your hands on more effective fat burners, in our honest opinion.