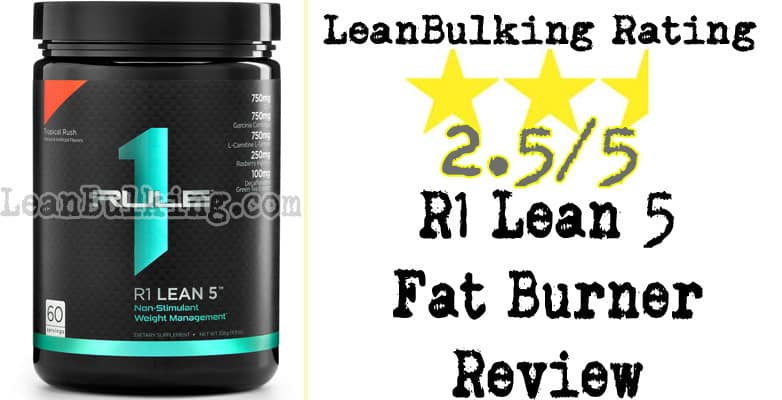 About The Product: R1 Lean 5

R1 Lean 5 is a non-stim fat burner supplement (meaning it doesn’t contain any stimulants such as Caffeine Anhydrous, for those that didn’t know).

It costs $29.99 on Rule 1’s own website store, so it’s not the most expensive fat burner on the market. But before you confirm that it’s good value, you should take a look at the ingredients in the next section.

We’re not saying that it’s not good value for money. But, in our experience, we’ve seen that cheaper supplements usually have under-dosed ingredients or a lack of effective ingredients to make-up for the cheaper price-tag (in our honest opinion).

As we mentioned, we’ll make our decision after analyzing R1 Lean 5’s supplement facts in the next section. First though, let’s try and find our more about the company behind it.

Rule 1 is a supplement company that mainly focuses on protein powders.

They are based in the USA and not much is known about them across the pond in the UK. But hopefully they’ll gain more exposure from their products being sold on bodybuilding.com, Amazon, and GNC.

Looking at their list of sponsored athletes, it seems that they place a focus on choosing athletes in the NPC. But Rule 1 do sponsor 1 IFBB Pro called Suraqah Shabazz.

Anyway, you’re here to learn more about their fat burner, R1 Lean 5. So let’s see which ingredients have been added to this supplement in the next section…

If you are unaware, the ingredients are the main features of a supplement. The ingredients determine whether a product will be effective and, ultimately, whether it’s worth buying.

We have many mixed opinions from our first glance. R1 Lean 5 contains a mixture of ineffective nutrients, as well as some better thermogenics such as Green Tea Extract.

As we mentioned earlier, due to R1 Lean 5 being a non-stim fat burner, it does not contain any stimulants like Caffeine Anhydrous. However, since you’re looking at this product, we’re assuming that this is a good thing for you.

The main negatives for us, personally, is that Garcinia Cambogia and Raspberry Ketones are both controversial ingredients that haven’t shown to be very effective at promoting fat loss.

Anyway, we’ll expand on this as we take you through each ingredient in R1 Lean 5. By the end of this review, you’ll have a good idea of how safe and effective this fat burner really is.

Also known as CLA, this is a fatty acid that’s become quite commonly linked with fat loss; this is the reason why many people trying to lose weight will supplement it.

But, has it actually proven to promote fat loss? Well, not directly.

Basically, it’s fat burning effects have not shown to be significant enough to justify its place in a fat burner supplement. The only real benefit that CLA MIGHT delivery is that it some studies suggest that this ingredient might help preserve muscle mass while you cut body fat.

So, we’re happy to consider CLA as a useful ‘bonus’ addition to R1 Lean 5. But if we were to only choose 5 ingredients to include in a fat burner, then CLA would not be one of them – it’ll never be a key feature in a fat burner supplement.

Now, this is one of the ingredients that we consider to be useless. That might sound harsh, but this is our honest opinion.

Basically, Garcinia Cambogia was involved in many promotions online, where companies really emphasized its ability to promote fat loss. So much so, that we saw that it was sold as a ‘miracle’ nutrient.

But, as we all know, there’s no such thing as a ‘miracle’; the secret formula for fat loss is hard work, a calorie deficit – and an effective fat burner can simply speed up your results and provide the extra motivation you need.

Ultimately, there haven’t actually been enough positive studies that show Garcinia Cambogia as capable of helping you lose body fat. So we would have much-preferred something tried-and-tested such as Cayenne Pepper Extract (which contains high amounts of capsaicin) instead here.

This is a form of L-Carnitine that’s able to help reduce muscle fatigue and damage.

We’re actually surprised that this form has been added, as Acetyl-L-Carnitine is known for being more effective at promoting fat loss in studies.

Basically, L-Carnitine is undoubtedly a beneficial addition to any pre-workout or fat burner supplement; it’s always useful to reduce muscle fatigue or damage, to help your body stay fresh to develop.

But as it doesn’t really directly promote fat loss, we consider L-Carnitine L-Tartrate to be a ‘bonus’ addition in R1 Lean 5.

As with Garcinia Cambogia, Raspberry Ketones is another ingredient that benefitted from a lot of ‘hype’ from the media.

Raspberry Ketones went viral almost overnight as being another ‘miracle’ ingredient that was supposed to burn fat like crazy. However, clinical studies showed that this ingredient was essentially useless.

As a result, we won’t waste too much time on this ingredient. We would have preferred it to not have been added to R1 Lean 5. Something proven to work such as Cayenne Pepper Extract would have been much more beneficial here, and would have helped to take this fat burner to the next level.

Green Tea Extract is by far the best ingredient in R1 Lean 5. It’s the only tried-and-tested ingredient to promote fat loss, due to containing high amounts of catechin.

But why not just consume green tea as a hot beverage? Good question; this is because it doesn’t provide an optimal amount of catechins by drinking it in tea form.

Ultimately, this is exactly why supplements contain Green Tea Extract. The extract in supplements provides a much larger and effective amount of catechins without having to consume 8 cups a day, instead, allowing you to consume in a convenient pill form.

However, we do have a slight issue here; R1 Lean 5 only contains 100mg Green Tea Extract, which isn’t very effective.

As studies have shown that you need at least 500mg per day to benefit from it, it’s a shame that Green Tea Extract has been under-dosed here. This reinforces the importance of getting the dosage of ingredients correct in fat burners. 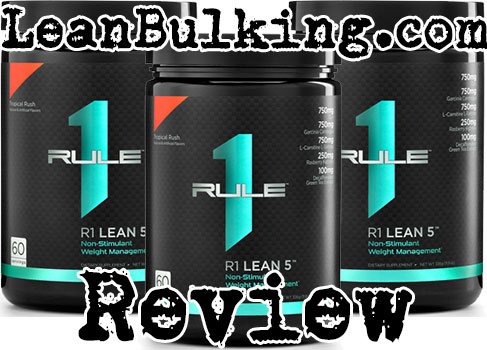 For the most part, R1 Lean 5 contains safe ingredients that won’t cause any side effects. However, having Raspberry Ketones in this fat burner is bad for more than 1 reason.

Here are the potential side effects from taking R1 Lean 5:

Ultimately, we feel that a 2.5-star rating is very fair for R1 Lean 5. It does have some positive features, such as containing Green Tea Extract, and even L-Carnitine is useful.

However, these positives are bought down by the fact that almost half of the ingredients in R1 Lean 5 have shown to be mostly ineffective. And Raspberry Ketones has even been linked with side effects too.

But one thing that we’ll praise R1 Lean 5 for is that it does not contain any proprietary blends. So hopefully, this company can create a better fat burner that will score higher on our site. For now, though, R1 Lean 5 isn’t the worst product, but it’s certainly not the best either.

R1 Lean 5 isn’t the most expensive fat burner on the market, so we don’t want to be too harsh. We respect that the company behind it tried to create an affordable product.

However, it only contains 1 tried-and-tested fat burning ingredient (Green Tea Extract) and even this has been under-dosed.

As a result, we don’t think that it’s the best option when looking for a fat burner in our honest opinion. We would personally save up for a few more weeks and try a different product.