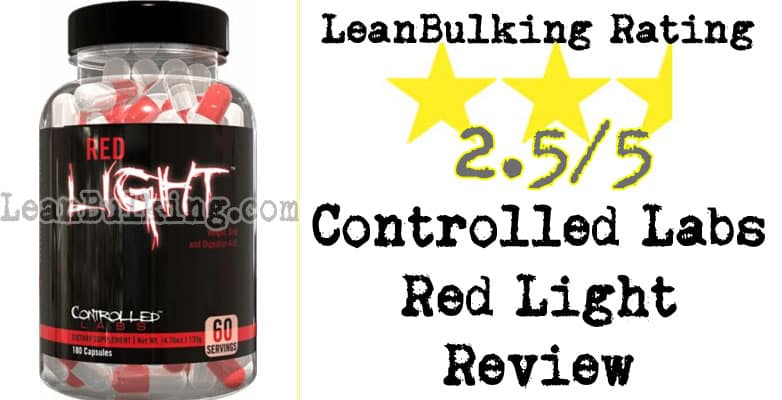 Controlled Labs Red Light is a pre-workout supplement that was released in mid-to-late 2018. It costs $32.99 for 60 servings, so its not the worst priced product that weve ever seen - in terms of value for money, its not bad at all.

But is it going to improve your performance in the gym to help you achieve better results? Well, thats exactly what well be finding out by analyzing its supplement facts in the next section.

Not only that, well be analyzing whether Controlled Labs Red Light may cause side effects. And ultimately, whether its worth buying over the other fat burners out there on the market.

First though, lets try to find out more about the company behind it.

Who are Controlled Labs?

Controlled Labs are a pretty big name in the pre-workouts sector. This is because theyve released some of the most popular pre-workouts in their time such as White Flood and White Flash.

If were being honest, though, we dont believe that this company has managed to compete with other companies in the fat burner supplements department. So were interested to see whether Controlled Labs Red Light will be the first to help them battle in the fat burning market.

To do this, lets see which ingredients have been added to Controlled Labs Red Light in the section below…

We mentioned that Controlled Red Labs was pretty good value for money, as it comes in 60 serving containers. But the most important features of a supplement are the ingredients that make up their supplement facts.

So, in order to see whether Controlled Labs Red Light is worth buying, were taking a look at whether it contains clinically proven nutrients.

From first glance, this seems like a very respectable fat burner supplement. One of the things that we really like is that Controlled Labs Red Light contains a sensible amount of Caffeine; most other fat burners containing wayyy too much, putting you at risk of jittery side effects.

Anyway, well expand on this as we take you through each ingredient in this fat burner. By the end of this review, youll have a good idea of how safe and effective Controlled Labs Red Light really is.

Back to Hibiscus Sabdariffa Extract. Some studies suggested that it might be able to reduce cholesterol levels and blood pressure, which is great for general health.

However, the only way this can promote fat loss is due to it being low in calories. So if you replace this with your full fat coffee, it might make a slight difference.

Now, the bad news is that it doesnt contain any nutrients that make this a thermogenic like Green Tea Extract; if you didnt know, Green Tea Extract is able to help you lose weight due to it containing catechins, which boost metabolism.

For this reason, we dont believe that Hibiscus Sabdariffa Extract is a great addition in Controlled Labs Red Light. We would have preferred to see Green Tea Extract here instead.

This is another ingredient that has shown to improve your cholesterol levels. But a positive about Olive Leaf Extract is that it might benefit your blood sugar levels, which would help you lose body fat.

However, in every study that we checked out, Olive Leaf Extract did not make a significant impact on the subjects weight loss. For this reason, we have reason to believe that this is an unreliable addition to Controlled Labs Red Light.

Also known as Cha de Bugra Extract, this became quite popular as a fat loss aid in countries such as Brazil; its believed to help you target stubborn fat.

But that is the first problem in our honest opinion. Its now known that you cant target specific areas of your body to lose fat on - although you can tone up by performing resistance exercises (eg. weight lifting).

In fact, we found that many health stores had stopped selling Coria Salicifolia Extract, probably because clinical studies couldnt back it up (in our honest opinion).

Ultimately, we cant endorse this as an effective fat burning nutrient. Instead, we would have much preferred a proven thermogenic such as chili pepper extract or green tea extract.

Caffeine Anhydrous is definitely one of the best ingredients that you can find in fat burner supplements.

Why? Because it can give you that boost in energy levels when youre cutting calories (and maybe carbs) from your diet in order to lose weight.

However, weve seen that most fat burners contain too much caffeine (at least for us) to handle without suffering jittery side effects. Its for this reason that were always happy when companies add a sensible dosage of Caffeine Anhydrous into their fat burner.

Controlled Labs Red Light is great in this aspect; it contains 175mg split into 3 capsules, so around 59mg caffeine per serving, which will be sure to keep you safe from jitters - those more tolerant to caffeine might even be able to enjoy coffee while consuming this fat burner.

So, theres nothing to complain about in terms of Caffeine Anhydrous content with Controlled Labs Red Light.

You might have seen this under its more common name Theobromine; its basically the stimulant thats naturally found in cocoa beans.

Now, we mentioned that there was a sensible dosage of Caffeine Anhydrous in Controlled Labs Red Light. However, adding another stimulant into the mix increases your risk of jitters.

Personally, we dont believe that theres any need for 2 stimulants to be contained within 1 fat burner supplement. And if we were to choose 1 stimulant, it would definitely be the Caffeine Anhydrous, as its proven to be safe throughout the years.

As a result, we dont believe that theres any need for Theobroma Cacao here (in our honest opinion).

While peppermint leaf can be used to make tea, its not going to as beneficial in a fat burner.

Why? Because its not a thermogenic thats shown to boost your metabolic rate.

One reason why many people add Peppermint Leaf to their tea, is to help relax their bowel (and poo more frequently, which certainly isnt a bad thing). But there havent been enough studies that proven Peppermint Leaf Extract to be an effective fat burning nutrient for it to be justified in Controlled Labs Red Light, in our honest opinion.

Ginger Root Powder is a good example of what we would consider as a bonus ingredient; this is because its benefits are undeniable in terms of improving general health, but its not proven to drastically promote fat loss.

If you compare the effects of a tried-and-tested thermogenic such as Green Tea Extract and Ginger Root Powder, its clear who wins. So, ultimately, we would have preferred to see a thermogenic instead.

But as we mentioned, Ginger Root Powder can certainly help support general health.

This is a really interesting addition to Controlled Labs Red Light. And it might become more of a commonly used ingredient in the future, so were impressed.

What is it? Bifidobacterium Lactis is a probiotic that is naturally found in fermented foods such as cheese; this can improve your gut health while you restrict your calories in order to lose weight.

Saying that, a probiotic isnt going to directly promote fat loss. And you can easily consume probiotics through products such as Yakult, so we dont consider this to be an essential addition to Controlled Labs Red Light.

Ultimately, this is a positive bonus addition that we have no complaints about,

We wont go into too much detail with these two ingredients. They are basically more probiotics and offer the same benefits as Bifidobacterium Lactis.

As a result, well conclude that this can improve your gut health, which is a positive thing.

So what does it do? Well, there have been studies that suggest this herb can benefit your libido, which isnt a bad thing. But if we were to choose 1 ingredient to support healthy testosterone levels, then we would have personally chosen Vitamin D3.

Not only that, if your main aim is to raise your test levels, then you should be looking at testosterone booster supplements as your priority. 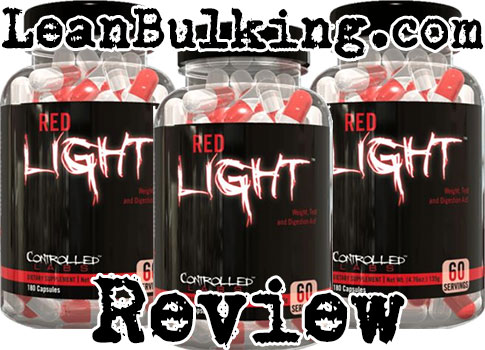 In terms of side effects, the good news is that Controlled Labs Red Light does not contain any potentially harmful nutrients.

Of course, if you consume tons of coffee with this fat burner, then youll increase your caffeine consumption and your risk of side effects yourself.

Also, you cant forget that this fat burner contains 2 stimulants (Caffeine Anhydrous and Theobroma Cacao); this increases your risk from suffering jitters.

Here are the potential side effects from taking Controlled Labs Red Light:

You can see that we respect Controlled Labs Red Light. Its certainly one of the safer fat burners on the market; were especially glad that it doesnt contain Synephrine or Yohimbe, which have both been linked with numerous side effects.

Not only that, were impressed that some probiotics have been added to this fat burner. This might become a more common addition to fat burners, as it can improve your gut health while your cut calories. But saying that, probiotics arent going to directly promote fat loss, so this is certainly a bonus addition as we mentioned.

But there are some issues in our honest opinion. This includes the fact that Controlled Labs Red Light contains 2 stimulants and is lacking tried-and-tested thermogenics such as Green Tea Extract.

However, due to the lack of thermogenic nutrients in this fat burner, we dont think its the most effective option available right now.