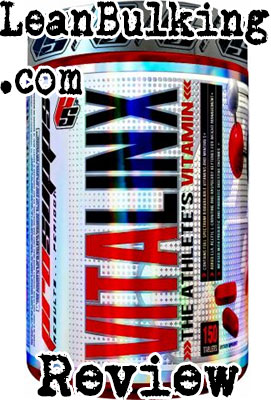 VitaLinx is marketed as a multi-vitamin and fat burner hybrid supplement by ProSupps. It costs $65.95 on their website for 30 serving containers, making it the most expensive multi-vitamin type product we’ve ever seen.

But one thing we noticed was the HUGE serving size; you’re recommended to take 5 tablets per day, which is a lot.

Studies have found that the optimal serving size is 3-4 tablets (or capsules), so this there’s no need to create a product with a serving size of 5 capsules daily.

Anyway, we’ll take you through the ingredients inside this product in the next section. But first, we’ll tell you more about the company behind it.

ProSupps are a USA-based supplements company that are best-known for their pre-workout supplements; we’ve actually reviewed their other products, Dr Jekyll Nitro X and Mr Hyde Nitro X, which were both released in 2017.

Anyway, let’s see which ingredients that ProSupps have added inside VitaLinx in the next section below…

VitaLinx contains 10 main ingredients, which we’ll be analyzing for you in this review. You’ll see that it’s filled with numerous multivitamins too, but all you need to know about these vitamins are that they simply improve your general health.

We’re interested in whether the ingredients inside VitaLinx can justify it’s HUGE $65.95 price tag; simply put, if it doesn’t promote fat loss, then you might as well pick up cheap multivitamin tablets instead (or an effective fat burner, if you’re looking to lose body fat). 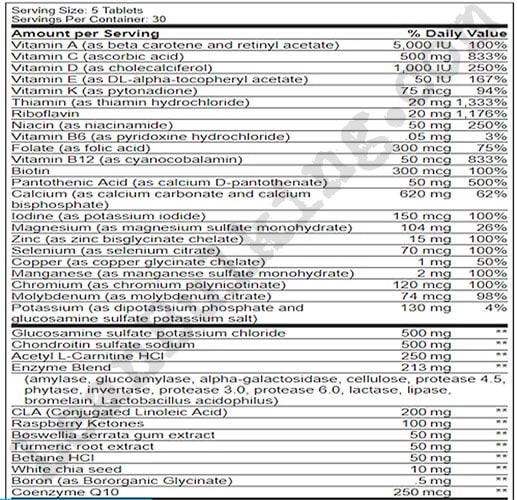 This is a mix of numerous different ingredients (which you can problem guess from its name). Anyway, the only good thing about this, is that it contains potassium; this is great for your general health, as your potassium and salt levels are supposed to be kept similar, and as we consume more salt than potassium through our diets, this is very useful.

However, the bad news is that this ingredient hasn’t proven to help you shred your unwanted stubborn fat. For this reason, so far, we’d rather buy a cheaper multivitamin from the local drug store…

L-Carnitine can be a great addition to any pre-workout supplement; it’s shown to help reduce muscular fatigue and damage, while improving your focus in the gym.

However, L-Carnitine isn’t the best choice of ingredient when it comes to fat burner supplements. Ultimately, studies have shown that while L-Carnitine might slightly improve your metabolism, this benefit isn’t noticeable enough to justify it here.

For this reason, while L-Carnitine is a perfect addition to a pre-workout supplement, it’s not very useful in a fat burner/multivitamin product such as VitaLinx here.

Also known simply as Conjugated Linoleic Acid, this has been believed to promote fat loss for a long time. In fact, there are individual CLA products advertising this exact benefit.

However, recent studies have proven that CLA has almost no effect on fat loss. While it’s shown promising signs of helping you preserve muscle mass while losing fat, it’s not going to be the ingredient that actually promotes fat loss in the first place.

Not only that, you can preserve muscle mass while cutting, by keeping an eye on your macros (making sure to consume enough protein, fats and carbs per day, within your basal metabolic rate.

Now, this is one of the worst ingredients you can find in fat burner supplements. Read this article that we’re written here, or we’ll give you a quick summary below.

Basically, Raspberry Ketones first hit the market as some kind of ‘miracle’ ingredient to help you lose fat. This led to a sudden surge in raspberry ketones sales, and companies still try and make sales based on this myth.

For this reason, we always recommend that you avoid fat burners and any supplement containing Raspberry Ketones.

If you’re wondering what this is, it’s a herb that’s been used in ayurveda (Traditional Indian Medicine), and is believed to reduce inflammation and improve the health of your joints.

However, while it can improve your general health, Boswellia Serrata Gum Extract hasn’t shown to be effective at promoting fat loss (making it can ineffective ingredient in VitaLinx).

You’ve probably used Turmeric in food before. But just incase, it’s a spice that’s commonly used in Indian cooking (in foods such as curry), and has also shown to contain bioactives.

But let’s be honest here, you can consume enough Turmeric in your meals. There’s simply no need for this to be inside a supplement that costs $65.96, such as VitaLinx here.

We would have much preferred ProSupps to have added a tried-and-tested fat burning ingredient, such as green tea extract; this has proven to boost your metabolism, and an optimal dosages of catechins can only realistically be consumed through Green Tea Extract in supplements (unless you want to pay a fortune to keep buying high-quality match green tea powder, but this isn’t really cost effective).

Now, we mentioned that Raspberry Ketones are on our ‘blacklist’ of ingredients to avoid. Well, Betaine is also on that list; basically, it’s shown to be useless at promoting fat loss, but has been consistently reported to cause your breath and sweat to smell fishy.

Just in case you’re skim reading here; Betaine is a useless ingredient that causes a side effect. Just let that sink in.

You don’t want to be paying $65.95 for a supplement that causes side effects, do you? No, we didn’t think so.

Ultimately, this is a great example of why everyone should do their homework on which ingredients are inside the supplements they’re interested in buying – to save them from wasting their hard-earned cash.

This is a bit of a gimmick when added into fat burner supplements. Basically, companies falsely advertised White Chia Seeds as an appetite suppressing ingredient, but studies have shown that it’s not effective at delivering this benefit.

As a result, White Chia Seeds are an ineffective ingredient inside VitaLinx. If you’re looking to surpress your appetite, then Glucomannan is the most reliable ingredient for the job.

Boron is a dietary mineral that’s naturally found in bananas, pulses and many different types of beans. It’s shown to be a great ingredient at raising your testosterone levels, when consumed in higher dosages than you would achieve through your diet.

For this reason, we consider Boron to be a great addition to a testosterone booster supplement. However, there’s no need for it to be in Vitalinx by ProSupps here.

Coenzyme Q10 is probably the most overpriced ingredient you can find in the supplements industry; we’ve found companies trying to sell Coenzyme Q10 for over $30 on its own!

Ultimately, this has led people into believing that its actually a useful ingredient. But don’t be fooled, these companies will be laughing all the way to the bank with your money…

Studies have proven that the ‘positive effect’ from taking Coenzyme Q10 is a placebo (meaning there’s no scientific evidence to prove that it works). For this reason, we consider this to be an ineffective ingredient and a complete waste of money.

Right, so this is actually further up on VitaLinx’s ingredient list, but we thought that we’d save the best till last.

While the name of this ingredient suggests that it’s nothing more than a vitamin, this is wrong; Vitamin D3 is actually a hormone, as it’s produced by your body after your skin is exposed to sunlight.

What does it do? Well, Vitamin D3 has shown to benefit your general health, bone health – and it’s one of the best ingredients at raising your testosterone levels when consumed in dosages between 3,332IU-5,oooIU.

However, as VitaLinx only contains 1,000IU of Vitamin D3, it’s not going to do much here. In fact, if you look at most Vitamin D3 supplements, you’ll see that most have been under-dosed.

For this reason, we advise checking to see whether a product contains between 3,332IU-5,000IU; this will ensure that you get good value for money. 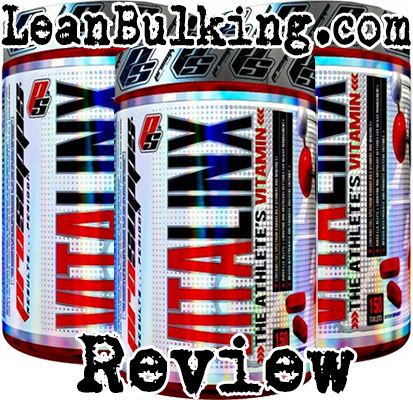 There’s 1 ingredient inside VitaLinx that has been reported to cause side effects – Raspberry Ketones.

You might be surprised to hear this, as Raspberry Ketones gained a lot of praise in the media for being some kind of ‘miracle’ ingredient. However, what most people don’t know is that Raspberry Ketones are chemically treated with Synephrine (which has been banned in the UK & Canada, among other countries, after causing harmful side effects).

For this reason, we advise you to avoid supplements containing Raspberry Ketones to stay safe (as it also doesn’t promote fat loss either).

Here’s the potential side effects from taking ProSupps VitaLinx:

Ultimately, you have to take a step back and look at what this supplement is; a multi-vitamin containing added ineffective fat burning ingredients.

That’s right, ProSupps VitaLinx contains numerous ingredients that are believed to help you shred fat – but haven’t proven to deliver this benefit in reliable studies.

For this reason, we would personally rather choose a fat burner containing tried-and-tested nutrients that’re proven to work. We would also choose a cheap multi-vitamin product that contains all of the same vitamins and minerals for under $5 (maybe even $2, depending on where you look).

After analyzing ProSupps VitaLinx’s nutrient profile, we can confirm that this isn’t worth the $65.95 price tag. You would be wise to look at better options elsewhere.

ProSupps VitaLinx might improve your general health, but it’s not going to promote fat loss.

If you’re wanting to lose body fat, then you can buy much better options for around the same price (and you can also get a cheap multi-vitamin for under $5 containing the same vitamins and minerals as this supplement.