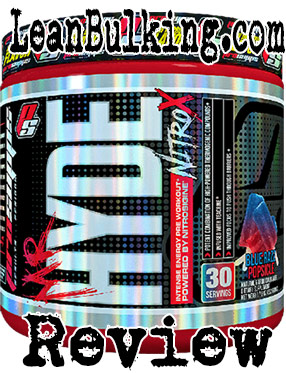 As a result, Mr Hyde NITRO X is priced to compete with the premium pre-workouts on the market; so itll be interesting if it can beat any of our top rated pre-workout supplements this year.

Before we take a look at the ingredients inside Pro Supps pre-workout, well tell you a bit about this company below.

Pro Supps are a USA-based supplements company. Theyre well known for their pre-workout supplements - Mr Hyde and Mr Jekyll, which have become very popular in the industry.

As a result, Pro Supps have decided to release these new supplements, Mr Hyde NITRO X. Were expecting big things, as this is supposed to be a direct improvement on their last product.

Lets see whether it is.

Mr Hyde NITRO X contains 13 main ingredients that well be analyzing for you in this section. But well point out that this is a HUGE number of ingredients to have in 1 product.

We prefer pre-workouts that contain less than 10 ingredients, as theyre usually contain better dosages of ingredients inside. After a quick look at Mr. Hyde NITRO Xs nutrient profile, we can see that Pro Supps has under-dosed L-Citrulline…which proves our point.

Also, we have to point out that Mr Hyde NITRO X contains a proprietary blend…

Proprietary blends are mixtures of numerous ingredients thatre only shown to you as 1 quantity. As you can see from the Fat Burner Advanced Blend on its ingredient list, the overall amount is 237.5mg - but youre not shown the dosages of each ingredient inside such as Cayenne Pepper.

Anyway, well take you through each ingredient inside Mr. Hyde NITRO X - to show you how effective this pre-workout really is. 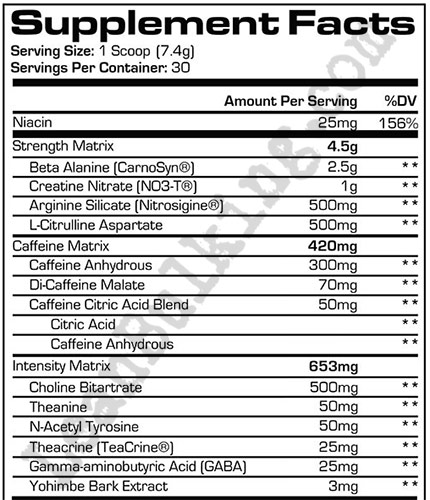 This always splits opinions on bodybuilding forums; this is because Beta-Alanine can enhance muscular endurance, but also cause a side effect called paresthesia.

Paresthesia is a tingling and itchy sensation on your face and body - personally, we find this side effect very distracting when were trying to focus in making gains in the gym…

For this reason, we try to avoid pre-workouts that contain Beta-Alanine. But we do acknowledge that others might not find paresthesia as bad as us, so we never criticize a supplement just because it contains Beta-Alanine.

However, we will say this; Creatine Monohydrate offers the same benefit, without causing any side effects, so wed choose this everytime.

Many companies have started adding different forms of Creatine - to try and produce the most up-to-date- product. However, we believe theres no need to fix something thats not broken. And Creatine Monohydrate has proven to be both safe and effective since the 1980s.

For this reason, we prefer to see Creatine Monohydrate in pre-workout supplements.

Not only that, as less is known about Creatine Nitrate; this means no-one is 100% sure whether its safe or effective. Its always better to choose the tried-and-tested ingredients.

This is basically a mixture of Arginine and bound to silicate. All you need to know that this ingredient hasnt shown to be effective in any studies - making it an unreliable product.

This is because Arginine has a poor absorption rate, so any ingredient that its mixed with will wont work.

Were not sure why Pro Supps has chosen this mixture of Citrulline and Aspartate. L-Citrulline, on its own (or as Citrulline Malate) is a key pre-workout ingredient, as its shown to promote muscle pumps.

However, there hasnt been any studies to prove that this mixture works - making it an unreliable ingredient. Not only that, Citrullines been under-dosed here anyway; for L-Citrulline to be effective, you need dosages of at least 3,000mg (for Citrulline Malate, the optimal dosage is 6,000mg).

For this reason, Citrulline Aspartate wont do much here.

This is the safest and best stimulant you can find in pre-workout supplements. Basically, studies have proven this - and you should know, as its consumed everyday in tea & coffee.

However, if youve ever consumed too much coffee before, you know it can cause jitters and energy crashes. Well, its the same when added into supplements.

For us, under 200mg Caffeine offers benefits without causing side effects. However, anything over 200mg can cause jitters or crashes - which is why we try to avoid pre-workouts containing this amount of Caffeine.

Unfortunately, Mr Hyde NITRO X contains 300mg Caffeine; meaning it might cause you side effects (unless you regularily drink more than 4 cups of black coffee per day).

The bottom line is, we prefer pre-workouts to contain less than 200mg Caffeine per serving - to stay safe from jitters or energy crashes.

This is another form of Caffeine. All you need to know is that this is a bad thing; Mr Hyde NITRO X already contains 300mg of Caffeine, so adding more puts more people at risk from jitters and energy crashes.

For this reason, we recommend that you avoid pre-workouts that contain more than 1 source of stimulants - to stay safe from side effects.

This is a proprietary blend thats contained inside Mr Hyde NITRO X. Basically, youre told that the overall quantity of this blend is 50mg, but youre not shown the exact dosage sof hte ingredients inside.

Anyway, its the same problem here as the Di-Caffeine Anhydrous; theres already an over-dose of Caffeine in Mr Hyde NITRO X - so this blend makes it almost certain that youll suffer from side effects.

Even those that are tolerant to Caffeine will have their heads blown off - and suffer from jitters and energy crashes here.

Choline is one of the worst pre-workout ingredients you can find. Heres why; it offers no benefits to improve your gym session, but causes a side effect.

What side effect does Choline cause? Answer: fishy breath and sweat.

This is something you want to avoid - no-one likes smelling like they have an STI…Personally, we dont anyway.

The bottom line is this; Choline is a useless ingredient that makes you smell fishy.

Theanine is usually a key pre-workout ingredient, but Mr Hyde NITRO X contains wayyy too much Caffeine for it to work.

Basically, Theanine enhances the effects of Caffeine - allowing companies to add smaller dosages of it, while offering you the same benefits as a higher dose.

This means that youll be safe from side effects while enjoying benefits such as; improved focus, strength, energy and endurance. However, as theres an over-dosed of Caffeine in Mr Hyde NITRO X, theres no stopping you from suffering from jitters and energy crashes.

Tyrosine is a brain-booster thats shown to offer enhanced cognition when added into supplements. However, when Caffeine is dosed under 200mg per serving, it offers enough of boost in focus to benefit your gym session.

For this reason, Tyrosine isnt needed in pre-workouts that contain Caffeine. But its a key ingredient inside Nootropic supplements.

This is a stimulant thats believed to offer similar results to Caffeine. However, as its a fairly new ingredient, there isnt much known about it - meaning its not 100% certain whether its safe or effective.

For this reason, were sticking with Caffeine for now. But well be keeping an eye out for future studies on Theacrine.

Also known simply as GABA, its believed to enhance your human growth hormone (HGH) levels and promote brain health. However, no study has proven whether its actually effective.

For this reason, GABA is an unreliable ingredient in Mr Hyde NITRO X.

Yohimbe is on our blacklist of ingredients to avoid for one reason - its commonly reported to cause harmful side effects.

Basically, it contains the same compounds as Yohimbine (which has been banned in both the UK & Canada for causing harmful side effects). The reason why Yohimbe is used instead, is because its believed to be safer, but it isnt.

For this reason, we cant recommend any product that contain Yohimbe - and none of the pre-workouts on our top 3 contain this ingredient. 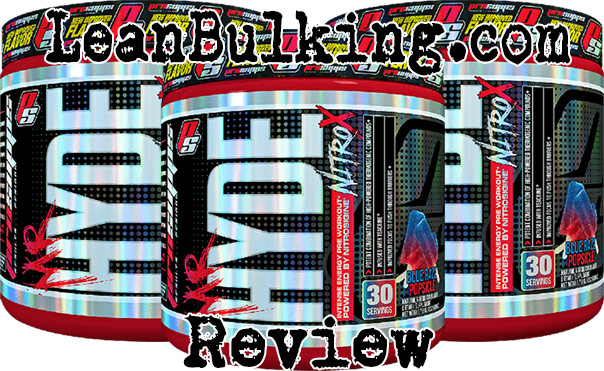 There are 4 things that can cause side effects in Mr Hyde NITRO X; Beta-Alanine, Choline, the HUGE amount of Caffeine (over 300mg per serving) and Yohimbe.

Well quickly take you through what each ingredient can cause…Beta-Alanine can cause paresthesia (tingling and itching on your face and body).

Not only that, Choline can cause your breath and sweat to smell fishy. The HUGE amount of Caffeine will almost certainly cause jitters & energy crashes, and Yohimbe has been reported to cause numerous side effects, which well take you through below.

Considering this is supposed to be their upgrade on Pro Supps popular pre-workout supplements (Mr Hyde and Mr Jekyll), it doesnt seem much like an upgrade.

Basically, you can see from the list of potential side effects why we cant recommend Mr Hydr NITRO X. Its potentially quite harmful, and you dont want to waste your money on a supplement that can ruin your gym sessions - especially when youre paying to benefit from improved workouts…

As a result, we recommend taking a look at the highest rated pre-workouts this year; none of them cause harmful side effects, and they contain optimal dosages of key pre-workout ingredients thatre proven to work.