See You Best Options In Our
- Top 3 Pre-Workouts Page - 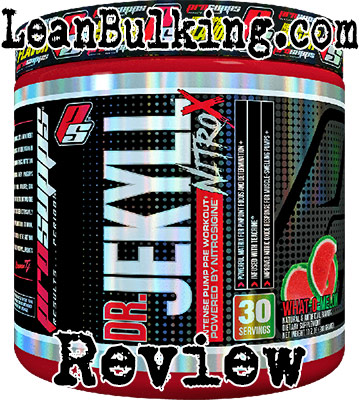 Dr Jekyll NITRO X is a pre-workout supplement made by Pro Supps. It costs $59.99 for 30 servings and comes in 2 flavor options - Lollipop Munch and What-O-Melon.

It sounds, tasty and its advertised to deliver all the right benefits for a pre-workout supplement. So itll be interesting to see whether the ingredients inside Dr Jekyll NITRO X can back up these claims.

But before that, well tell you a bit about the company behind the product (for those that dont know).

Pro Supps are a supplements company thats gained respect over since it was formed. As a result, theyve attracted some big names such as Shawn Rhoden and Jason Poston to the list of athletes they sponsor -  not bad.

So what are they known for? Well, Pro Supps has gained a lot of attention for their pre-workout supplements - especially the first Mr Hyde & Dr Jekyll products.

For this reason, they decided to release 2 new supplements in 2017; Mr Hyde NITRO X and this one (Dr Jekyll NITRO X). We got hold of the Water-O-Melon product to review here - so lets get to the main course below.

Dr Jekyll NITRO X contains 9 ingredients overall. Our first impressions of this pre-workout is good; it doesnt contain any harmful ingredients thatve been banned, and no proprietary blends either (meaning the exact dosage of each ingredient has been listed).

But from first glance, we noticed that many key pre-workout ingredients that have proven to enhance your workout are missing. Well explain more about this when we take you through each ingredient in Dr Jekyll NITRO X.

Its definitely worth knowing about each ingredient; so well analyze the nutrients inside this pre-workout - so you can see how effective Dr Jekyll NITRO X really is. 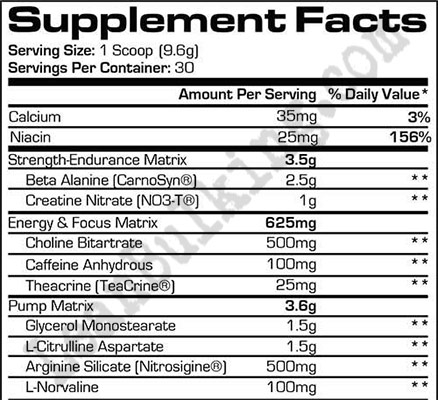 This compound always splits opinions; Beta-Alanine has shown to boost muscular endurance, but also causes a side effect called paresthesia.

Whats paresthesia? Well, its a tingling and itching sensation on the skin of your face and body…Personally, we dont enjoy this side effect as it distracts us from making gains.

For this reason, we try to avoid supplements containing this ingredient. We believe that if youre paying for a gym supplement, then you shouldnt experience any unwanted side effects.

This is a form of creatine thats believed to improve your strength endurance, as well as muscle pumps. However, there hasnt been any study that proves this ingredient works - meaning Creatine Nitrate is an unreliable ingredient.

As a result, we consider Creatine Nitrate as an unreliable ingredient. We wouldve preferred to have Creatine Monohydrate here instead (as this has proven to be safe and effective).

Simply put, Creatine Monohydrate has been used by athletes and bodybuilders since the 1980s - so theres no need for companies to try and replace it.

As the age old saying goes: dont try to fix something thats not broken.

Choline is always one of the worst ingredients you can find in pre-workout supplements. Simply put, it hasnt shown to offer any benefits to improve your gym session, but causes your breath and sweat to smell fishy.

Personally, we dont want to smell like fish in the gym…For this reason, Choline is basically a useless ingredient that causes a side effect.

If you dont know what anhydrous means, it basically means Caffeine has been dehydrated into powder form (so it can be added to supplements).

Caffeine is the best and safest stimulant you can find in pre-workouts; its consumed in products such as tea & coffee everyday and is proven to enhance your strength, endurance, focus and energy levels in the gym (helping you perform better).

For this reason, we consider Caffeine to be a key ingredient in pre-workout supplements. Its also been dosed sensibly in Dr Jekyll NITRO X - at 100mg per serving.

Theacrine is another stimulant thats believed to provide similar benefits to Caffeine. However, its not been studied much - making it an unreliable ingredient.

However, as theres only an overall 125mg dosage of stimulants in Dr Jekyll; youll still avoid jitters and energy crashes here. But as a general rule, we recommend avoiding pre-workouts containing more than 1 stiumulant (as this usually leads to over-dosages of Caffeine, which can cause jitters and crashes).

Personally, we only recommend pre-workouts containing under 200mg Caffeine (or stimulants); this ensures that you experience the full benefits such as improved strength, endurance, focus and energy levels, without suffering from side effects.

Glycerol is believed to improve your strength and energy levels - but no studies have proven whether it works (making it an unreliable ingredient).

Ultimately, we wouldve preferred to have Citrulline Malate here instead (as its prove to deliver intense muscle pumps). This is why its important for companies to do their research when formulating their products - and why you need to make sure the ingredients inside the product you buy are proven to be effective.

This is a mixture containing L-Citrulline. However, were not sure why Pro Supps didnt simply add Citrulline Malate instead - as its tried-and-tested (unlike Citrulline Aspartate). Wel explain more about this below.

If youre not sure what this is, its simply a mixture of Arginine and Silicate. But its important to know that any ingredient containing Arginine is ineffective.

Why? Answer: Because Arginine has a poor absorption rate, meaning its ineffective when orally supplemented. For this reason, we dont like seeing Arginine or ingredients containing it, in pre-workouts.

In fact, this is exactly why Citrulline Malate is better; Citrulline converts into Arginine in your kidneys (taking away the issue with Arginines poor absorption rate).

L-Norvaline is a branched chain amino acid thats believed to improve nitric oxide production; this would enhance your muscle pumps…if it worked.

Basically, there hasnt been any studies proving that L-Norvaline actually works - making it an unreliable ingredient. 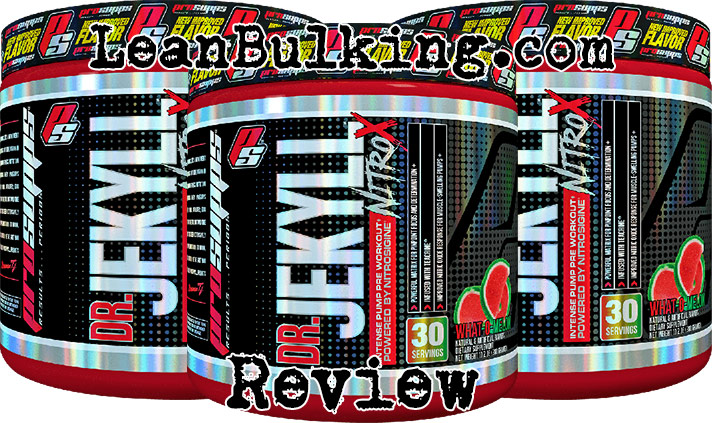 There are 2 ingredients in Dr Jekyll NITRO X that can cause side effects; Beta-Alanine & Choline.

As weve mentioned, Beta-Alanine can cause paresthesia, so we try to avoid pre-workout supplements containing this ingredient.

Whats paresthesia? Answer: Tingling and itching sensation on the skin of your face and body. Personally, we find it distracting when lifting weights in the gym…

Not only that, Choline is known for causing your breath and sweat to smell fishy - a good enough reason to avoid Choline, especially as it doesnt offer any benefits.

Considering Dr Jekyll NITRO X was made to be an upgrade from their previous pre-workout, it doesnt look like it.

This pre-workout released in 2017 should be keeping up with the best products on the market. But its missing key pre-workout ingredients, so its being left behind by those thatre formulated better already - not a good thing for Pro Supps.

Not only that, its been reported to cause 2 side effects. We believe you shouldnt suffer from any side effects if youre paying to improve your workouts and physique.

For this reason, we cant recommend Dr Jekyll NITRO X. Instead, take a look at the best pre-workouts on the market this year.

We personally dont believe that Dr Jekyll NITRO X cant keep up with the best products on the market.

Its missing key pre-workout ingredients, and can cause side effects - making it not worth the cash in our honest opinion.