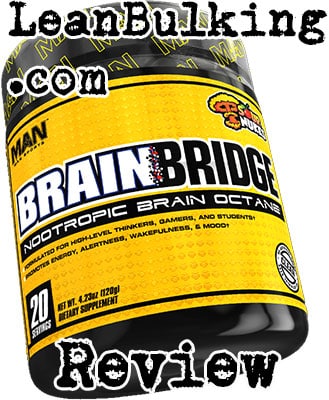 BrainBridge is a nootropic supplement made by Man Sports. It usually costs $42.99 for a 20 serving container, but they sometimes offer deals including a reduction in price.

This product comes with a serving size of 1 scoop per day; so yes, that means it comes in powder form like pre-workout supplements. Personally, we prefer capsules with nootropics, as this enables you to consume servings ‘on-the-go’, but mixing powder into a drink takes more time and can be more of a hassle for us.

What did it taste like? Well, not adding any sugar to a product is a good thing (it doesn’t take a genius to know that decreasing sugar from your diet is a good thing). But without any addition of natural sweeteners such as Monk Fruit Extract, BrainBridge doesn’t taste good at all.

We believe that Man Sports Nutrition should have made more of an effort to enhance the taste of this nootropic – as they made the choice to present it in powder form.

Anyway, we’ll analyze the nutrient profile of BrainBridge nootropic, after telling more more about the company behind it.

Who are Man Sports Nutrition?

We found out that ‘MAN’ stands for ‘Metabolic Augmenting Nutrition’ for this company’s name.

In all honesty, we didn’t learn much about this company from their website; this is because Man Sport didn’t have any ‘about us’ page on there, which is a shame.

Personally, we like learning about the company before buying a product – so you can see what their morals and values are, to see if they’re well-represented in the supplement.

Anyway, none of this really matters to you, does it? You want to know whether the ingredients inside BrainBridge nootropic are effective or can cause side effects. Find out in the next section below…

The first thing we noticed about BrainBridge nootropic, was that it contained a HUGE amount of ingredients – around 15, to be exact.

We don’t believe that it’s necessary to have this amount of ingredients in 1 supplement. In fact, we find that the best noootropic supplements usually contain around 10-12 ingredients maximum.

However, we are glad that Man Sports haven’t included any proprietary blends in the nutrient profiles of BrainBridge nootropic. This means you can see the exact dosages of each ingredient inside this product (allowing you to see whether they’ve been optimally dosed or not).

A negative we found was that BrainBridge nootropic contains 2 ingredients that have been reported as being potentially harmful before; Huperzine A and Alpha-GPC. For this reason, we usually try to supplements containing these ingredients.

Anyway, we’ll take you through the main ingredient inside BrainBridge (or we’ll both be here all day writing & reading) – so you can see how effective it really is. 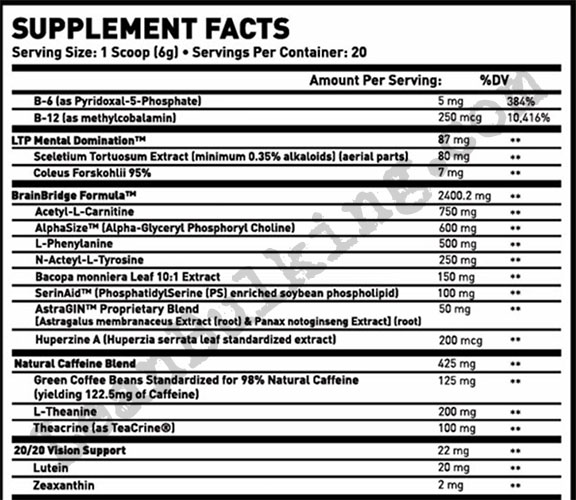 We’re not sure why Man Sports have added this ingredient into BrainBridge nootropic. Basically, Coleus Forskohlii is believed to promote fat loss while enhancing your testosterone levels.

Sounds like the perfect ingredient right? Well, unfortunately, this hasn’t been confirmed by reliable studies yet – making Coleus Forskohlii an unreliable nutrient.

We’ll be keeping a close eye on this ingredient, as it could be useful in testosterone booster supplements in the future. However, as it definitely has no effect on your cognition, there’s no need for this to be inside BrainBridge nootropic.

L-Carnitine is a great addition to a pre-workout supplement, as it’s main benefit is being able to reduce muscular damage and fatigue. However, while it can slightly improve your focus, there are many better ingredients for this job (such as Lion’s Mane Mushroom).

For this reason, we don’t believe that L-Carnitine is a necessary addition to BrainBridge nootropic.

If you read our introduction, this is one of the ingredients that we warned you about for one reason – it’s been reported to cause numerous side effects.

As a result, it’s not a good idea to consume a supplement containing Alpha-GPC, and we advise you not to (in order to stay safe from side effects).

Simply put, there’s no need to risk side effects. Especially when there are ingredients that are better than Alpha GPC that are proven to be safe and effective (such as Lion’s Mane Mushroom).

To start with, we have reason to believe that Man Sports have misspelled this ingredient (it’s supposed to be ‘L-Phenylalanine’). So let’s hope that the people who formed this ingredient list weren’t taking BrainBridge nootropic…

Anyway, all you need to know is that is that L-Phenalalanine is naturally found in breast milk, and is believed to improve your cognition. However, there haven’t been any studies to prove whether this is actually works – making it very unreliable.

Again, we know that there are better ingredients Man Sports could have added here instead, such as Rhodiola Rosea (which is tried-and-tested to reduce stress, while improving your cognition).

Finally, a key addition to a nootropic supplement. L-Tyrosine has proven itself to be one of the best ingredients to boost your cognition.

In fact, to test this, we bought a sample of pure L-Tyrosine and consumed optimal dosages of 175mg per serving; we found that even alone, this was able to boost our concentration, memory and attention span.

Ultimately, consuming this with other effective nutrients will deliver great results. So we’re always happy when companies add L-Tyrosine into their product – like Man Sports have done with BrainBridge nootropic here.

They say good things come in 3’s. Well, this is certainly the case here, as Bacopa Monnieri is another key nootropic ingredient tht’s tried-and-tested to work.

Simply put, studies have shown that Bacopa Monnieri is able to improve your memory and your ability to learn at an accelerated rate. For this reason, we consider this as a key addition to BrainBridge nootropic.

Man Sports have dosed this well at 150mg per serving, so no problems here.

PhosphatidylSerine completes the ‘trio’ of best ingredients inside BrainBridge nootropic.

Basically, have you ever wondered why fish is known to be beneficial for your brain? Well, apart from the Omega 3 fatty acids, fish also contain high amounts of PhosphatidylSerine (which is proven to lower stress levels and improve cognition, especially as you age).

So if you’re not a lover of seafood, then you can still experience the same benefit to your cognition by supplementing with a nootropic containing PhosphatidylSerine. Not bad, eh?

For this reason, this is one of our favorite additions to BrainBridge nootropic, and any nootropic supplement it’s found inside.

Now that we’re past the best nutrients in BrainBridge, we’re onto one of the worst…yes, Huperzine A is an ingredient that we commonly advise you to avoid, due to being reported to cause numerous side effects.

We acknowledge that Huperzine A has shown to actually promote cognitive health. But we don’t think it’s worth suffering from side effects for; especially when there are safe & effective nutrients that put you at risk from side effects available.

You might be glad to hear that this is the last ingredient we’ll analyze on BrainBridge nootropic’s nutrient profile. My wife is calling me for tea, and i’ve heared that there’s spaghetti & meatballs on the table with garlic bread…

Anyway, we don’t understand why Man Sports have added Green Coffee Bean into their nootropic supplement. Don’t get us wrong, this is a key addition to a fat burner, as it’s shown to promote fat loss and general health.

However, one thing that Green Coffee Bean Extract isn’t known for doing, is boosting your cognition. For this reason, we would have preferred to see a more effective nutrient instead, such as Lion’s Mane Mushroom or Rhodiola Rosea.

As we’ve mentioned, there are 2 ingredients that’re commonly reported to cause side effects in BrainBridge nootropic; Huperzine A and Alpha-GPC.

For this reason, we always advise you to stay away from supplements containing these ingredients – to stay safe from side effects.

Ultimately, there’s no point paying a premium price to improve your quality of life and cognition, if you’re going to suffer from side effects. As a result, we always recommend that you take a close look at the nutrient profile’s of nootropic’s your interested in, and determine how effective it will be (or risk wasting your hard-earned cash).

Here’s the potential side effects from taking BrainBridge Nootropic:

If BrainBridge nootropic didn’t contain Huperzine A or Alpha-GPC, it would have placed in our top 3 nootropic rankings at this moment in time. However, due to these 2 ingredients being reported to cause side effects, we can’t recommend this product to you.

Ultimately, we’ve tried many nootropics and you’ll be surprised by how many cause side effects. As the market is filled with less nootropic supplements than others, such as testosterone boosters, fat furners and pre-workouts; it’s almost as if companies don’t feel they need to spend as much time or effort formulating their nootropics as there isn’t much choice available to you.

If there’s one thing that we feel is very beneficial to the supplements industry, it’s more competition. More competition basically forces companies to be more careful when formulating their products, resulting in higher quality products.

As nootropics are still quite a new discovery, we’ve only found under 5 products that are even worth talking about. For this reason, we’re always keeping an eye out for new nootropics to hit the market, and waiting until more companies release more nootropics – to increase the competition for this market, which will result in higher quality nootropics.

BrainBridge contains 2 ingredients that can cause side effects, so it can’t compete with the highest rated nootropics at the moment.

For this reason, we believe that you’ll be benefited more by looking for better options elsewhere.