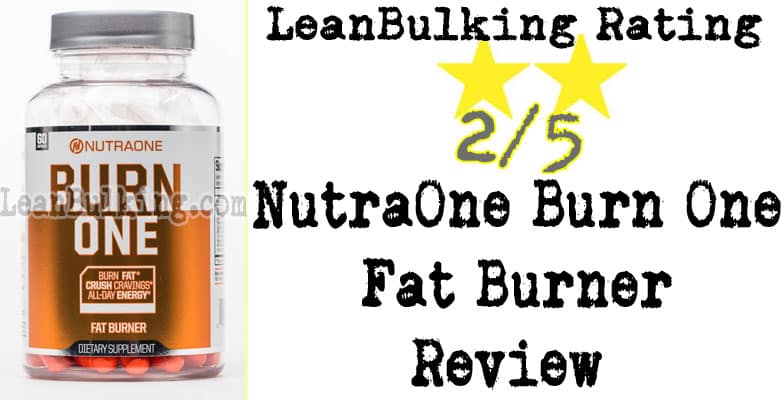 About The Product: NutraOne Burn One

NutraOne Burn One is a fat burner supplement that costs $59.99 for 60 serving containers. Now, this wouldn’t be a bad amount for your money, but the daily serving size is 1 capsule.

Why is this bad? Well, studies suggest that 3-4 capsule servings spread throughout the day is more effective at keeping your body ‘fueled’ with fat burning nutrients. So 1 capsule isn’t the best here (in our honest opinion).

For the price of Nutra Burn One, you can buy our favorite fat burner called Instant Knockout. So, we’re expecting big things here.

Before we get into the supplement facts and take a look at which ingredients are in NutraOne Burn One; let’s try to find out more about the company behind it.

NutraOne is a supplement company based in Texas, USA. We hadn’t heard about this company before finding their Burn One fat burner, so we’re excited to find out whether it can compete with the ‘big boys’ on the market.

We’ve checked out all of this company’s products and they are all highly priced. This isn’t a bad thing as we like ambitious companies.

However, this means that we do expect it to be as good as other products at the same price. So the question is, is NutraOne Burn One as good as the top 3 fat burners available? Let’s find out in this review…

We always give every product a chance instead of just criticizing from the start. However, we simply can’t ignore it when a product contains a proprietary blend.

Why? Because we’re fighting our corner and we want to see proprietary blends eradicated from the supplement industry. The sooner that companies stop adding them to products, the better off the world will be.

After looking at it, you’ll realize that all of the ingredients have been clumped together – and you won’t see the individual dosages of each ingredient inside. In a nutshell, that is what a proprietary blend is.

Why do companies use them use proprietary blends?

Well, some claim that proprietary blends help keep their formula a secret.

But in our honest opinion, we believe companies should back their own products and believe that they will beat cheaper ‘copycats’ instead of hiding behind these blends.

Ultimately, we try to only consume supplements that provide the exact dosage of each ingredient; this allows you to know exactly what you’re putting into your body, to help you stays safe from side effects.

For example, you should know your own tolerance to caffeine. You’ll know that drinking more than 5 cups of coffee in a short time-frame may cause jitters. Well, in a proprietary blend, you’re not shown the exact dosage of caffeine, so you’re taking a risk.

There are positives, though

Right, we don’t want to sound like we hate this product. We don’t, we’re just here to review NutraOne Burn One and we’re giving our honest opinion on it.

So we’ll point out that there are some positives.

One great thing about NutraOne Burn One is that it contains Green Tea Extract; this is one of the best thermogenics you can find on the market and is proven to work.

Not only that, caffeine can be a positive. A boost in energy levels can be great – especially when you’re cutting calories in order to lose weight.

Anyway, we’ll expand on this as we take you through the main ingredients in NutraOne Burn One. By the end of this review, you’ll have a good idea of how safe and effective this fat burner really is.

Here’s Everything You Need To Know About NutraOne Burn One:

In terms of stimulants, you won’t get much better than Caffeine Anhydrous.

What is it? Well, ‘anhydrous’ simply means that caffeine has been dehydrated into powder form so it can be added into capsules.

Usually, the main benefit of Caffeine Anhydrous is that it allows you to keep an eye on how much you consume (as it’s a pure form of caffeine).

However, as we mentioned, this benefit is taken away as it has been added to a proprietary blend; basically, this means that you’re not shown the exact dosage of Caffeine Anhydrous in NutraOne Burn One.

So what does that mean? Well, it means that you’re at an increased risk of jitters and energy crashes. You might have experienced these side effects after consuming too much coffee.

As a result, we prefer when companies don’t add proprietary blends. Instead, companies should provide you with the exact amount of stimulants in their products, to keep you safe (in our honest opinion).

For this reason, we don’t want to criticize Caffeine Anhydrous. Think about it – do you hate coffee just because you consumed too much one time and suffered jitters? No.

As long as you know exactly how much caffeine you’re consuming in fat burners, then you’ll be safe. So, it’s a shame that you’re not given this in NutraOne Burn One.

As we mentioned earlier, Green Tea Extract is one of the best thermogenic nutrients you can find on the market.

Why? Because it contains a high amount of catechins, which studies strongly suggest is capable of promoting fat loss. But the same studies show that you need to consume at least 500mg Green Tea Extract for it to work.

The problem with NutraOne Burn One is that this ingredient is part of a proprietary blend. By now, you’ll know that this means you’re not shown the exact amount of Green Tea Extract in this fat burner.

In fact, as the whole proprietary blend’s overall amount is 700mg, it’s highly unlikely that there is an optimal 500mg dosage of Green Tea Extract in NutraOne Burn One. Especially as there are over 10 main ingredients in this product.

We’ve grouped these 3 ingredients to save time. And also because they are all forms of stimulants that can boost your energy levels.

Now, we’ve mentioned that consuming unknown dosages of stimulants can increase your risk of jittery side effects. So having 4 stimulants as part of a proprietary blend isn’t the best idea (in our honest opinion).

This is especially true, as Synephrine & Yohimbine have both been linked with numerous side effects.

However, as we want to provide a compltely unbias reivew, we will acknowledge that Synephrine and Yohimbine have both shown to help you lose weight.

Ultimately, they are not ingredients that we would want to consume on a regular basis. But you can’t argue with the studies – they work if you want to risk the side effects.

We’ll analyze these 2 ingredients together because they are both ‘brain boosters’ that are commonly seen in pre-workouts and nootropics.

Basically, they are both proven to help improve your cognition (and focus). But we are confused ab0ut why they have been added into NutraOne Burn One, which is a fat burner.

As far as we know, Alpha-GPC and L-Tyrosine have not shown to promote fat loss directly. For this reason, we can’t consider them relevant to a fat burner or perfect additions to them.

This is an interesting addition to NutraOne Burn One; Hoodia Gordonii is believed to be an appetite suppressant, which would make it a great addition to this fat burner.

Basically, appetite suppressants can be perfect. If you’re not as hungry between meals, you won’t snack on junk food or candy – decreasing your calorie intake and helping you to lose body fat quicker.

For this reason, we can’t recommend that you consume this ingredient.

NutraOne Burn One Side Effects

We’ve complained about the use of the proprietary blend in NutraOne Burn One throughout this review. So you’ll know that we don’t like them.

This isn’t for no reason though; an unknown amount of stimulants can increase your risk of jitters and energy crashes. As a result, these are the exact side effects you are at risk of suffering from with NutraOne Burn One.

Not only that, a study (that we’ve included in the above section) showed that Hoodia Gordonii can increase your risk of cardiovascular side effects. For this reason, we personally prefer to avoid consuming supplements containing this ingredient.

Here are the potential side effects from taking NutraOne Burn One:

Our bottom line for this fat burner is this; if it didn’t contain a proprietary blend, then it would have been rated higher.

If we could see that NutraOne Burn One didn’t contain unnecessarily high dosages of Caffeine Anhydrous, then we wouldn’t mind it at all. But the fact is that this information has been withheld from you due to it being part of a proprietary blend.

So, the main reason why we can’t recommend NutraOne Burn One to you is that it has hidden ingredients inside a big proprietary blend.

But we won’t be ignoring the positives, though. We are happy to see that NutraOne Burn One contains Green Tea Extract, which is one of the best thermogenics that is proven to help you burn fat; it’s just a shame that the dosage isn’t revealed to you, so it’s impossible to determine whether Green Tea Extract is going to be effective here.

Bottom Line: NutraOne is mainly let down due to it containing numerous stimulants in a proprietary blend. This increases your risk of jittery side effects. For this reason, we don’t believe that it can compete with the highest rated fat burners on the market (in our honest opinion).