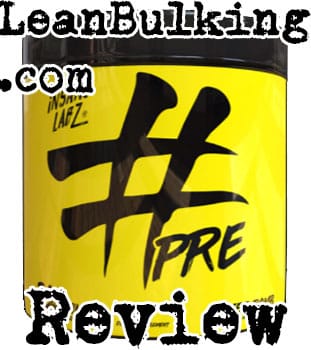 Insane Labz is looking to modernize their line-up of supplements by bringing out their # (Hashtag) series of products. #PRE comes in 3 flavor options - Blue Bomb, Juice Bomb, and Water Bomb, so it sounds pretty explosive…see what we did there?…

Its a good idea, and I can already imagine the hundreds of customers thatll be going on social media (Twitter, Facebook & Instagram) and tagging these products in pictures.

Weve chosen to review Insane Labz #PRE, and straight away were happy that it doesnt contain proprietary blends; this is a great step towards a huge improvement by Insane Labz, so we fully back this move.

How much does it cost? Well, #PRE is priced at $59.95 on Insane Labz official website. So this is definitely one of the more expensive pre-workouts on the market.

In fact, at this price-tag, Insane Labz #PRE is priced to compete with the premium pre-workouts that are highly rated. So this review will take a look to see whether #PRE is good value, or is trying to punch too highly.

To do this, well analyze Insane Labz #PREs nutrient profile for you in the next section. But first, well tell you more about the company behind it.

Who Is Insane Labz?

Insane Labz has really done a great job in recent times. Theyve produced tons of supplements, which are all great for certain people. And its for this reason that Insane Labz has gained a pretty good reputation on the market - competing against the likes of Optimum Nutrition & MuscleTech for sales.

So why are Insane Labz products only good for certain people? Well, this is just our honest opinion. But weve realized that many of their products contain bucket-loads of stimulants, so theyll only suit people that drink over 6 cups of coffee daily (again, our honest opinion).

Anyway, you probably know who Insane Labz is if youre looking at reviews of their product. So without wasting any more time, lets see which ingredients have been added to their 2018 release, #PRE.

Insane Labz #PRE contains 10 ingredients overall, which is right on the border of what we believe to be necessary; in our experience, pre-workouts containing more than 10 nutrients are usually under-dosed.

From first glance, were pretty happy with what we see. Insane Labz has chosen to stay away from proprietary blends, which we are very pleased with. Theres simply no need to hide ingredients in these blends, as you should always know exactly what youre putting into your body.

But one negative for us personally with #PRE is that this pre-workout contains an overload of stimulants; we dont drink more than 3-4 cups of coffee per day, so we dont have the strongest tolerance to caffeine or stimulants in general.

Well expand on this as we take you through each ingredient in Insane Labz #PRE. By the end of this review, youll have a good idea of how safe and effective this pre-workout really is. 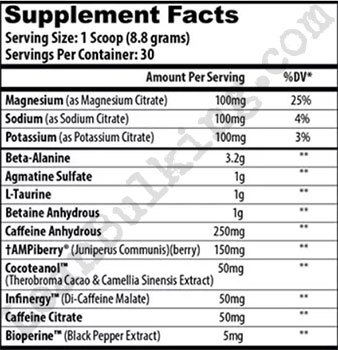 We always have mixed opinions of Beta-Alanine. This is because its able to boost your muscle endurance, but it also causes a side effect known as paresthesia (itchy & tingly skin).

But the most important thing is that Beta-Alanine works - even if it causes paresthesia. Studies have shown that it raises your muscle endurance, so you cant argue with it.

Agmatine Sulfate has increasingly become a popular addition to pre-workout supplements. So its almost no surprise that its in Insane Labz #PRE here.

However, the bad news is that Agmatine Sulfate hasnt been used in enough studies to prove that its 100% reliable (in our honest opinion). Not only that, Agmatine Sulfate is a derivative of L-Arginine, which has a notoriously poor absorption rate when orally consumed. So Agmatine Sulfate most likely suffers from this issue too.

The good news is that Agmatine Sulfate hasnt shown to cause any side effects. So in fairness, the worst thing itll do is not work, which is better than causing side effects to be fair.

Ultimately, we would have preferred to see something more useful such as L-Carnitine instead; L-Carnitine has proven to reduce muscle fatigue and damage, while also strengthening your mind-muscle-connection too.

Most people have heard of L-Taurine due to it being found in energy drinks. But you might be surprised to hear that it has no effect on your energy levels, as its not a stimulant.

So what does it do? Well, Taurine has shown to help reduce cramping, which is a good thing; theres nothing worse than cramping up halfway through a personal record-breaking squat!

But saying that, Taurine isnt going to make or break a pre-workout either. So we always consider it as a great bonus addition to Insane Labz #PRE here.

Betaine Anhydrous is another ingredient thats very commonly found in pre-workout supplements. So were almost not surprised to see it in Insane Labz #PRE.

Its believed to improve your sporting performance, and there are a few studies that show it works. But the problem is that there are many studies showing that its ineffective too.

Not only that, the worst part is that Betaine Anhydrous is known for making your breath and sweat smell fishy. This side effect is officially known as trimethylaminuria, and this study specifically shows that it causes it here: https://www.ncbi.nlm.nih.gov/pmc/articles/PMC3509925/

For this reason, we personally choose to avoid Betaine Anhydrous as we dont like smelling fishy in the gym. And as we mentioned before, Creatine Monohydrate is also proven to boost your sporting performance without causing any side effects.

This is the main issue we have with Insane Labz #PRE - it contains bucket loads of stimulants. More than what is necessary, in our honest opinion.

So whats a sensible dosage thats still beneficial? Well, weve found that consuming no more than 200mg Caffeine Anhydrous will give you that kick to smash your gym session, without feeling jittery or suffering energy crashes.

Insane Labz #PRE contains 250mg of Caffeine Anhydrous, which by itself would be on the border of being too much. What pushes it over are the over stimulants that have been added; these include Theobromine, Di-Caffeine Malate, and Caffeine Citrate.

Now, this is exactly why we mentioned before that Insane Labz products are usually beneficial for certain people. If you drink tons and tons of coffee every day (more than 6 cups daily), then you might find this HUGE hit of caffeine to be beneficial.

However, if youre like us and dont spend half your salary on coffee, then you might be at risk of suffering jitters and energy crashes. For this reason, well repeat that we prefer pre-workouts that contain the equivalent of under 200mg Caffeine Anhydrous per serving.

In case youre wondering, BioPerine is a patented form of Black Pepper Extract; this contains concentrated amounts of a molecule called Piperine, which has shown to improve the bioavailability (absorption rate) of supplements that its added to.

So while Black Pepper Extract will never be a key addition thatll make or break any product, its another good bonus addition to Insane Labz #PRE here. 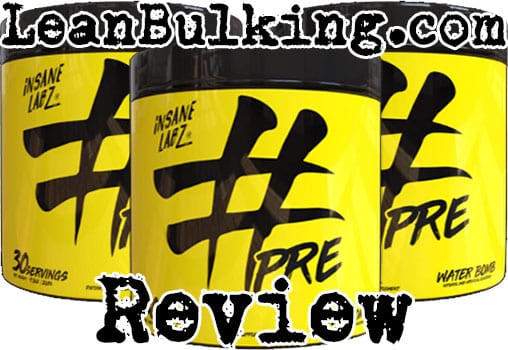 As we just mentioned, the main concern we have with Insane Labz #PRE is that it contains an overload of stimulants for the average person (in our honest opinion).

We personally prefer pre-workouts that contain under 200mg Caffeine Anhydrous overall; this will keep everyone safe from jitters and energy crashes, without causing any side effects. But unfortunately for us, Insane Labz #PRE contains 250mg Caffeine Anhydrous - as well as 3 other stimulants that have been added.

The other 2 side effects arent enough to put anyone off from taking Insane Labz #PRE. But they include paresthesia (itchy & tingly skin) caused by Beta-Alanine and fishy body odor from the Betaine Anhydrous.

Here are the potential side effects of taking Insane Labz #PRE:

We have to praise Insane Labz for choosing to not add any proprietary blends to their pre-workout released in 2018, #PRE. We definitely prefer knowing exactly what were putting into our body, so great job by this company.

For the most part, this is a respectable pre-workout supplement that deserves a place on the market. Itll even please those with an extremely high tolerance to stimulants.

However, for the average person, it contains an overload of stimulants that are likely to cause jitters and energy crashes (in our honest opinion).

However, it simply contains an unnecessary amount of stimulants that are likely to cause side effects, in our honest opinion.

For this reason, we dont believe that it can compete with the highest rated pre-workouts right now.