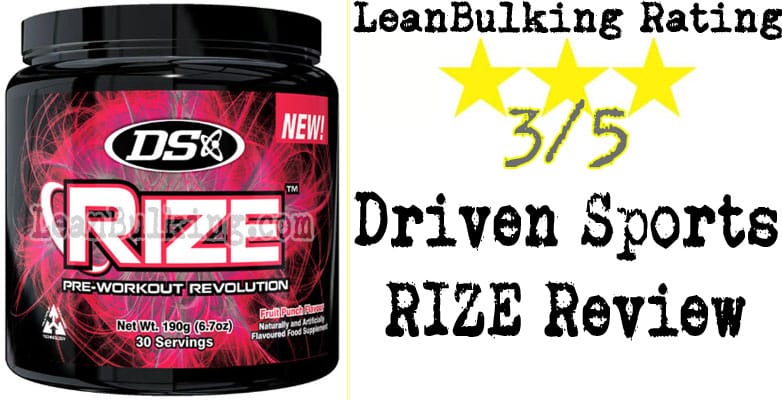 About The Product: Driven Sports RIZE

RIZE is a pre-workout supplement made by Driven Sports that was released specifically for the UK market; unfortunately, our readers in the US will find it much harder to get hold of this, although their other pre-workout called CRZ The OG is available.

But the real question is this: Is Driven Sports RIZE worth this price tag? Well answer this after analyzing this pre-workouts ingredients (supplement facts) and side effects in this review.

First though, lets find out more about the company behind it.

Who is Driven Sports?

Driven Sports is a USA-based supplement company that has many products on the market. They sell supplements aimed at helping you gain muscle, losing fat, and improving your performance in the gym (such as this pre-workout supplement).

Weve already mentioned that Driven Sports RIZE is only available in the UK; we dont mind that they create different products for different countries, but we would prefer the same product being sold universally so no-one is left out.

Anyway, theres nothing negative to talk about in terms of this company. So, lets see which ingredients have been added to RIZE in the section below…

In case youre new to supplements, its important to know that the ingredients in a product are their most important features. Dont be fooled by the advertising and marketing. Instead, its always better to focus on which ingredients have been added (in our honest opinion).

This is because ingredients will speak for themselves. We always look at whether a pre-workout contains clinically-proven nutrients that have shown to improve your performance in the gym - why else would you buy a pre-workout supplement?

Lets start with the good news. Driven Sports RIZE contains some great ingredients that we like to see in any pre-workout; these include Creatine Monohydrate, Caffeine Anhydrous, and Citrulline.

The 3 nutrients listed above have all shown to work; clinical studies back their use in pre-workouts to help you perform better and reach your fitness goals quicker. In fact, Creatine Monohydrate has long been known as the most reliable nutrient in the industry for this reason.

Along with the good, there are some bad features of Driven Sports RIZE, though. We especially dont like that this pre-workout contains a proprietary blend (meaning youre not shown the exact dosages of each ingredient).

Why is this bad? Well, without knowing the exact dosages of nutrients, its hard to determine whether its going to be effective. Each ingredient usually has an optimal dosage; for example, Creatine Monohydrate is usually consumed in dosages of at least 1,000mg to experience its full benefits.

As a result, we dont like proprietary blends in supplements. Its always much better to know exactly what youre putting into your body, and to make sure youre getting your moneys worth to - especially as Driven Sports RIZE costs £41.99.

However, were not here to just criticize this pre-workout. As we mentioned, there are many good features of this product. Well take you through each ingredient in Driven Sports RIZE. By the end of this review, youll have a good idea of how safe and effective this product really is.

Here Is Everything You Need To Know:

Even if you dont know much about supplements, theres a good chance that you know about Creatine Monohydrate. Its arguably the most popular nutrient in the industry, behind protein powder, for one reason - it works.

Different forms of Creatine have been around for decades now. In fact, Creatine was used by Olympic athletes in the 1992 Barcelona Olympics. Shortly after, it was released to the public where its been used by gym goers ever since.

Creatine Monohydrate has become known as one of the most reliable nutrients you can get hold of. This is because countless studies have proven that it works and its something that we enjoy using ourselves.

As a result, were always happy to see Creatine Monohydrate added to pre-workout supplements. But, the bad news is that its part of a proprietary blend; this means that youre not shown the exact dosage of it inside Driven Sports RIZE.

Ultimately, we always like to see at least 1,000mg Creatine Monohydrate in pre-workouts. However, there are no guarantees that Driven Sports RIZE contains this amount - this is a great example of why were against the use of proprietary blends in supplements.

Basically, if it does work, then its going to help improve your performance in the gym. And its side effect isnt physically harmful either.

For this reason, we dont mind having Betaine Anhydrous in pre-workout supplements. Just bear in mind that it might make your breath and sweat smell slightly fishy.

We mentioned towards the start of this review that L-Citrulline was one of the best ingredients available for pre-workout supplements.

What does it do? Well, lets begin by saying that there are 2 forms of Citrulline; L-Citrulline and Citrulline Malate. We personally prefer Citrulline Malate as it comes with added benefits, but they both have shown to deliver enhanced muscle pumps in the gym.

Theres nothing better than feeling your biceps expanding when curling weights, so this is definitely something that not only increases blood flow, but also your enjoyment in the gym too.

However, its part of a proprietary blend so youre not shown whether its been dosed correctly. This means its not guaranteed to work, which isnt great news.

Ultimately, when looking for L-Citrulline, make sure theres at least 3,000mg contained. When looking for Citrulline Malate, you need at least 6,000mg for it to work (according to clinical studies). Just some useful information to remember for future reference.

Also known as Catechu, this is an ingredient thats been used in Ayurveda (traditional Indian medicine). Its believed to possess numerous medicinal qualities; some believe that it can promote joint health among other benefits.

However, were concerned by the lack of clinical studies conducted on this nutrient. For this reason, we dont believe that its a reliable addition to Driven Sports RIZE yet - well wait until we see more studies in the future.

Weve grouped Cacao Extract and Caffeine Anhydrous together here because they are both stimulants. The problem is that both are part of the proprietary blend, meaning you dont know the exact dosage in Driven Sports.

Basically, consuming too much stimulant can cause you to suffer from jittery side effects - not something you want, as it can send you home from your gym session early.

As a result, we personally consume a maximum of 200mg Caffeine Anhydrous per serving with pre-workout supplements; this is a safe amount for us, but everyone has different tolerances to stimulants so its important to find your limit.

Theres no need to have more than 1 stimulant, so were would have personally wanted to see Cacao Extract removed from Driven Sports RIZE.

Were not quite sure why Tangerine Extract has been added here. It seems like more of a filler ingredient, which is worrying as its part of the proprietary blend; this means it could be taking up most of the space in Driven Sports RIZE without you knowing…another example of why we dont like these blends.

Anyway, Tangerine Extract might have positive effects on your blood pressure, which is good for your health. But its not really going to provide benefits to improve your gym session.

As a result, we consider this to be an unnecessary ingredient here.

This is an ingredient that is quite similar in chemical structure to DMHA, which isnt great as it has shown to cause side effects in past users.

As a result, Walnut Extract is also known for being a stimulant (being able to boost your energy levels). However, weve already mentioned that there are 2 other stimulants in Driven Sports RIZE, so this simply increases your risk of suffering jittery side effects, in our honest opinion.

Also known as Chromolaena Odorata Leaf Extract, this is another nutrient thats been used in traditional medicine. Its believed to reduce cholesterol levels and improve general health, as well as relieve pain.

However, its not going to compete with useful pre-workout ingredients such as Citrulline or Creatine Monohydrate. As a result, we dont consider this to be a necessary addition to Driven Sports RIZE here. 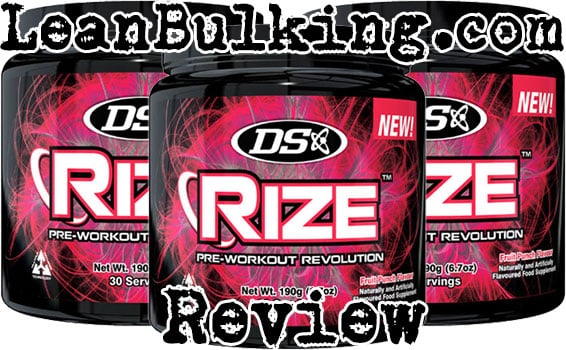 The good news is that the majority of the ingredients in Driven Sports RIZE are not going to put you at harm. However, due to them being in unknown dosages as part of a proprietary blend, theres always the increased risk of side effects.

For example, youve probably consumed too much coffee before. Everyone knows that too much Caffeine (or stimulants) causes jitters and energy crashes. Well, as there are 3 different forms of stimulants in this pre-workout supplement, we believe that this carries the risk of these side effects (in our honest opinion).

Also, we will note that Betaine Anhydrous has shown to cause your breath and sweat to smell fishy. But personally, this wouldnt really put us of from trying a supplement containing it.

Here are the potential side effects from taking Driven Sports RIZE:

As a whole, Driven Sports RIZE isnt a bad product. You can see that the company behind it has the best intentions, but there are a few issues; the biggest problem, for us personally, is that every ingredient in this pre-workout is part of a proprietary blend - remember that youre not shown the exact dosages of individual nutrients in these blends.

However, the good points include the inclusion of Creatine Monohydrate and L-Citrulline. These are 2 ingredients that have shown to help improve your workout in numerous studies. Its just a shame that youre not shown whether theyve been dosed optimally to ensure that they actually work in Driven Sports RIZE.

In conclusion, if the proprietary blend was removed and the dosages of each individual ingredient were shown to you, we would have given this a higher rating. But as it stands, we can only give Driven Sports RIZE pre-workout a 3-star review.

While Driven Sports RIZE is a respectable pre-workout, its faults (such as the inclusion of a proprietary blend) means that it cant compete with the highest rated pre-workouts on the market, in our honest opinion.