See Your Best Options In Our
– Top 3 Pre Workouts Page – 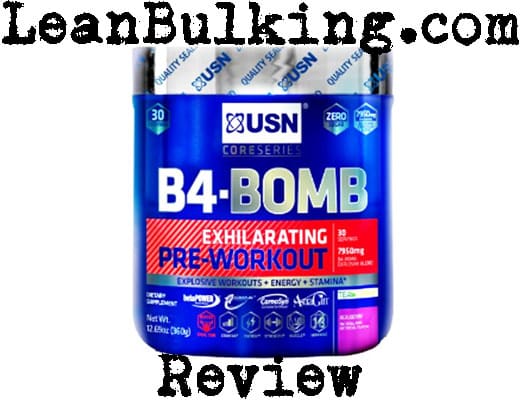 B4-Bomb is a pre-workout supplement by USN Sport. It costs $28.99 and comes in 3 flavors – Acai Berry, Blue Raspberry, Lime & Lemonade.

This supplement is sold in 30 serving containers, with serving sizes of 12g per scoop.

Who Are USN Sport?

USN Sport are an established supplements company that market a range of products – from protein powders, to fat burners. It was founded in 1999, so they’ve been around for a while.

Let’s see whether B4-Bomb can live up to their reputation.

For this reason, we’ve analyzed the key ingredients inside USN’s B4-Bomb; so you can see how good this pre workout is.

But first, let us explain what proprietary blends are.

Basically, proprietary blends are mixtures of numerous ingredients that are shown to you under one quantity. As you can see from this pre workout’s ingredient list below, all of it’s ingredients are part of the “USN B4-Bomb Explosive Blend“.

This is bad –  because we don’t know the exact quantity of each ingredient inside (apart from Caffeine).

Basically, too much of any ingredient can cause unwanted side effects, so it’s better to know the exact dosages of what you’re putting into your body – so we never recommend you to buy products that contain large proprietary blend. 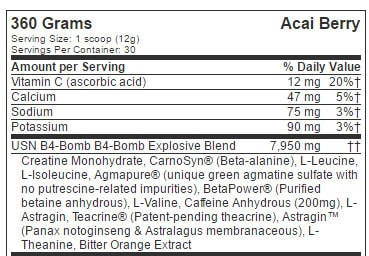 This is one of the best pre workout ingredients available. It’s been used by bodybuilders and athletes since the 1990’s for one reason – it works.

What does it do? Well, it’s shown to improve your strength and endurance in the gym – which will improve your workout.

But here’s the problem: it’s part of a proprietary blend, meaning there might be a tiny amount inside B4-Bomb – which would result in this being ineffective.

This molecule is a popular ingredient in pre-workouts on the market – but that doesn’t make it good.

Basically, Beta-Alanine has shown to improve muscular endurance, but it’s also shown to cause paresthesia (see side effects section for more info).

However, they don’t really offer much benefit to improve your workout. There’s no negatives to having BCAAs here, but USN should’ve replaced this with something more beneficial in a pre-workout – such as Citrulline Malate, which is proven to boost muscle pumps.

This is the second best ingredient in USN’s B4-Bomb pre-workout. It’s shown to enhance your strength, endurance, and focus in the gym – it’s the ingredient most responsible for the energy boosts you experience after taking a pre-workout.

The problem is, many pre-workouts contain large-dosages of Caffeine (over 200-300mg), which causes jitters and energy crashes. USN have done well to dose Caffeine correctly at 200mg, so you won’t experience its side effects here.

USB has done their research by adding L-Theanine in here. Basically, this nutrient works in synergy with Caffeine to form a ‘smart-caffeine’.

As a result, you’ll experience enhanced focus, while avoiding side effects like jitters and energy crashes. The only problem is, L-Theanine’s part of a proprietary blend, so there might not be a big enough dosage to deliver this benefit.

Astagin is a patented mix of nutrients that’s believed to improve absorption, ensuring that nutrients are getting into your system.

However, it’s basically a hyped-up ingredient – because it has a trademark name, many believe it’s better than it really is.

Just to make our point, Black Pepper Extract provides the exact same benefit (yes, the same stuff you put on your food).

Also known as synephrine, this is one of the worst ingredients you can find in a pre-workout.

Why? Because it’s been banned in the UK and other countries for causing harmful side effects (see side effects section for more info).

Not only that, it’s main benefit is to promote fat loss – which isn’t a direct benefit of a pre-workout supplement. There are already great fat burners on the market that’re designed to help you cut fat, so there’s no need for this ingredient here. 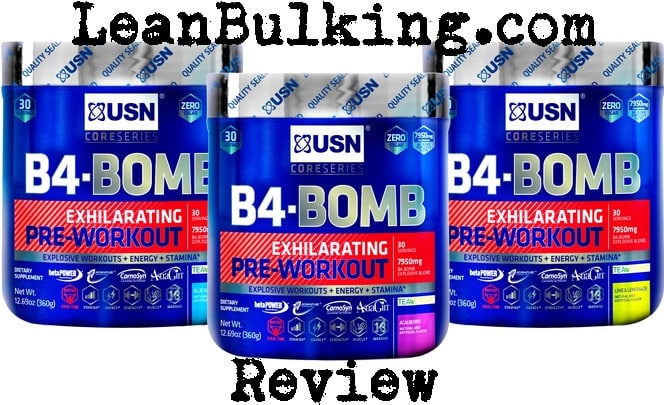 here’s an increased risk of side effects – as you don’t know the exact dosages of each ingredient.

The ingredient that’s almost certain to cause a side effect is Beta-Alanine; this causes paresthesia in dosages over 0.8g-1g.

This is when you experience tingling or itching on the skin of your face, chest, hands, fingertips and toes. It’s not harmful, but it’s very uncomfortable and distracting when you’re trying to focus on making progress in the gym.

Here’s the side effects you could experience with B4-Bomb:

Why? Because proprietary blends are one of the biggest gimmicks in the supplements industry; they’re often filled with cheaper, ineffective ingredients, with minimal amounts of effective ones.

For this reason, while B4-Bomb contains 3 key pre-workout ingredients, we can’t award this product over 2 stars. Not only that, it comes with the risk of numerous side effects, as you can see in the above section.