Ageless Kiss is marketed to females as an ‘anti-aging’, fat burning, nootropic supplement. So we’ll be comparing this against the market-leading fat burners and nootropics as a result.

It costs $59.99 for 30 servings containers, with a serving size of 2 capsules; this isn’t ideal, as studies show that 3-4 capsules spread throughout the day is optimal, as this keeps your body ‘topped up’ with nutrients to improve.

Not only that, the bad news is that just from looking at this product’s ingredients, we don’t think it’s likely to help you burn fat. However, we do believe that it can work to enhance your focus and memory, so Ageless Kiss is probably better as a nootropic.

Anyway, you’ll learn everything in the next section, when we analyze Ageless Kiss’ nutrient profile. But first, we’ll tell you more about the company behind it.

Who are Raw Synergies?

We actually really like Raw Synergies’ website, it’s very clean and they’ve managed to make it accessible while still very functional; we’ve seen many terrible company sites in the past, so this was like a breath of fresh air.

However, we do wish that Raw Synergies had an ‘about us’ page, so we could learn more about them.

Previously, we reviewed their fat burner/pre-workout hybrid supplement called ‘ThermoPre’. While we didn’t feel it could compete with the best fat burners on the market, we did respect what Raw Synergies tried to achieve with that product.

Ultimately, Ageless Kiss is another hybrid supplement; they’ve tried to create a nootropic/fat burner mash-up, so let’s see which ingredients are inside this product.

Ageless Kiss contains over 20 ingredients overall, but at least 10 of these are grouped together in a proprietary blend (we’ll expand on this below).

Proprietary blends are mixtures of numerous ingredients that’re only shown to you as 1 quantity. As you can see from the ‘Spectra Antioxidant Fruit Blend’ on Ageless Kiss’ ingredient list, the overall amount is 100mg – but you’re not shown the dosages of each ingredient inside such as Cinnamon.

This increases your risk of side effects, and also makes it uncertain whether this nootropic/fat burner will work. For this reason, we try to avoid any supplement that contains proprietary blends.

Not only that, as we mentioned before, we don’t believe Ageless Kiss contains the necessary dosages of ingredients to actually promote fat loss; while it does contain effective nutrients such as Green Tea Extract, it’s inside a proprietary blend that only adds-up to 100mg in total (studies have shown you need 500mg Green Tea Extract for it to work).

Anyway, we’ll take you through each ingredient inside Ageless Kiss. By the end of this review, you’ll know exactly how safe and effective this supplement is. 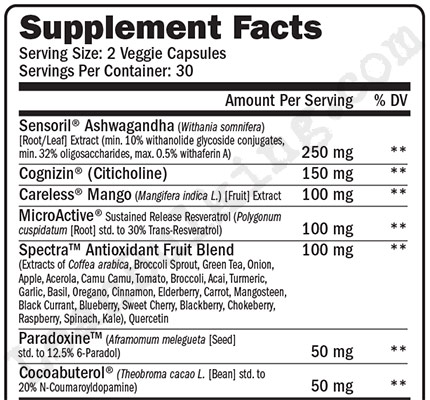 Ashwagandha is a herb that’s been used for decades in ayurveda (traditional Indian medicine), due to its ability to boost your power output.

For this reason, Ashwagandha can be a great ‘bonus’ addition to a pre-workout. However, we don’t feel it’s as useful in a nootropic/fat burner hydrid supplement like Ageless Kiss.

Citicholine is known for being a ‘brain booster’ that’s able to improve your cognition.

It can be a key addition to a nootropic, so if we were judging Ageless Kiss as a nootropic, then this would be great.

However, the bad news is that Citicholine has no effect on fat loss, so it wouldn’t be a great addition to a fat burner supplement.

Ultimately, it depends whether you’d be using Ageless Kiss more for it’s nootropic properties, or trying it as a fat burner. Personally, we would rather choose a specialist nootropic or fat burner – not a product that tries to do both.

Also known as Mangifera Indica Fruit Extract, this has shown promising signs of being a reliable nutrient to improve your cognition.

However, it’s not good news if you’re looking for a nutrient to help you burn fat; there’s no evidence that Mangifera Indica Fruit Extract supports fat loss.

But it can be a good addition to a nootropic supplement.

We mentioned before that Ageless Kiss contains a proprietary blend, well this is it.

Titled ‘Spectra Antioxidant Blend’, this contains over 20 ingredients, but only adds up to 100mg, making it the most useless thing we’ve ever seen.

We’re not being overly critical here; not many ingredients are effective in 100mg, so estimating that there’s a dosage of around 5mg of each ingredient inside this blend – they’ll be ineffective in Ageless Kiss.

It’s a shame, as this blend contains Green Tea Extract, which is proven to promote fat loss when consumed in 500mg dosages. Ultimately, Raw Synergies should have just added Green Tea Extract on its own, in an optimal dosage instead of this blend.

Also known as ‘Grains of Paradise’, this is a spice that’s very similar in appearance to black pepper. It’s known for its peppery taste and is added to African meals for this reason (it’s native to West Africa).

While there haven’t been enough studies conducted on Grans of Paradise (Afromomum Melegueta) for it to be reliable, there are a few studies that claim it works.

Due to Ageless Kiss not containing many effective nutrients, we’re willing to give it the benefit of the doubt here; we’ll be keeping an eye on this ingredient in the future, and will update if it’s proven to be more reliable anyway.

However, as there’s only 50mg in Ageless Kiss, it might not work anyway (no-one has found an optimal dosage of this ingredient yet).

In case you’re wondering, this is simply a patented form of natural cocoa extract; this will have been added due to it containing a stimulant, Theobromine.

Now, as Ageless Kiss doesn’t contain any other stimulant, this could have helped raise your energy levels while you cut calories. However, there isn’t enough of this nutrient to actually deliver this benefit.

Not only that, there isn’t enough evidence to suggest that Cocoa Extract is effective at fat burning either. For this reason, we have to consider this an unreliable ingredient in Ageless Kiss (especially at the low dosage added)

One of the best things about Ageless Kiss, is that it’s not likely to cause any side effects.

So while it’s not very likely to help you achieve your fitness goals, we’re glad that it’s not going to cause any harm either. Just make sure that you’re not allergic to any nutrients inside such as Cinnamon, and you should be fine in regards to side effects.

Ultimately, we probably sound like we’ve been overly critical of Ageless Kiss here, but we always give you the stone-cold truth. In all fairness though, Ageless Kiss isn’t the worst product we’ve seen (although it’s not the best either).

We appreciate that Raw Synergies didn’t add any potentially harmful nutrients into this supplement, so the important thing is you’re not likely to suffer from side effects.

However, we can’t recommend you to buy this product, as we don’t believe that it’s very likely to promote fat loss.

Ageless Kiss is a classic example of a hybrid supplement that’s not quite right; it’s marketed as a fat burner/nootropic.

But it’s not going to compete with specialist products on the market.

For this reason, we advise that you choose your main goal, and go for the relevant product (if you’re aiming to lose fat, choose a specialist fat burner).

Check Out The Best Fat Burners For Women!

Check Out The Best Nootropics This Year! 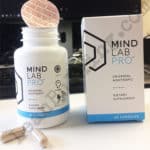