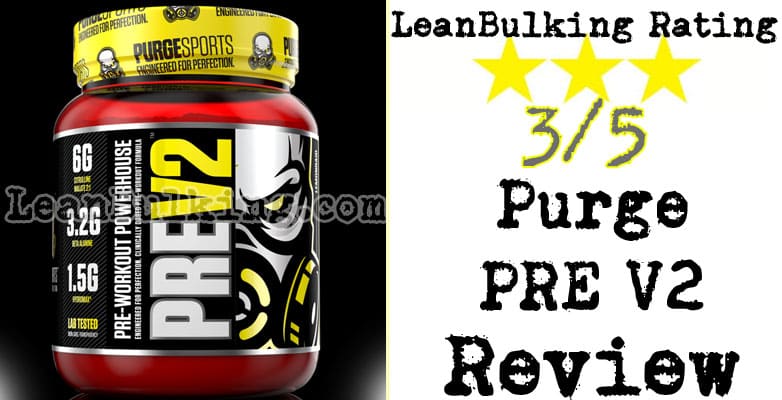 About The Product: Purge PRE V2

Purge PRE V2 is the second version of Purge Sports original Purge pre-workout. So we were expecting some big things for this product.

And in fairness, from first glance it looks likely to deliver the goods. It costs $54.99 for 25 serving containers, which makes it one of the more expensive pre-workouts on the market.

Well analyze its nutrient profile for you in the next section. But first, lets find out more about the company, Purge Nutrition.

Who is Purge Sports?

We might be mistaken, but we believe that this company was called Purge Nutrition not too long ago. However, it seems like its re=branded itself as Purge Sports, which isnt a bad thing.

In fact, we actually like the new containers for this companys supplements. Theyve gone for more modern with a distinct style, which were a fan of.

Anyway, so far, this company only sell pre-workouts and intra-workouts. So lets get straight into the supplement facts of Purge PRE V2…

As we mentioned, from first glance, Purge PRE V2 looks like a great pre-workout. It contains an optimal dosage of Citrulline Malate, which is quite rare to see.

Not only that, were happy to see that Purge PRE V2 contains L-Tyrosine and Beta-Alanine, which have both proven to be beneficial to your workout.

But its not all good news; were slightly concerned that the big 325mg dosage of Caffeine Anhydrous might cause people sensitive to caffeine to suffer jitters.

Anyway, well take you through each ingredient in Purge PRE V2. By the end of this review, youll have a good idea of how safe and effective this pre-workout really is.

Citrulline Malate is personally one of our favorite ingredients to consume before a workout. Its proven to raise your nitric oxide levels, which enables you to experience better muscle pumps in the gym.

Basically, theres not much better than feeling your arms inflate while curling weights. So, were very happy when we see an optimal 6,000mg dosage of Citrulline Malate.

Were always confused when we see Arginine AKG added to pre-workouts that already contain a good amount of Citrulline Malate.

Why? Because its supposed to do exactly the same thing, but studies have shown that its not as reliable as Citrulline Malate.

Ultimately, we would have much preferred to see something tried-and-tested such as Creatine Monohydrate in Purge PRE V2 instead.

When you google HydroMax, some strange things show up (we dont recommend that you google this if youre at work)…

Anyway, the version of HydroMax thats found in Purge PRE V2 is a patented form of Glycerol; this is believed to help keep you hydrated.

However, there have been conflicting studies conducted on Glycerol. So its not something that we would consider to be a key addition to this pre-workout here.

If theres one ingredient that youve heard of, then its probably Taurine. This is because its seen in energy drinks, but it has no effect on your energy levels.

So what does it do? Well, Taurine has shown to help prevent cramping during exercise, so its actually a pretty useful ingredient.

But by itself, its not going to improve your gym session very much. And keeping yourself hydrated is going to have the same effects.

For this reason, we think of Taurine as a great bonus addition to Purge PRE V2.

Agmatine Sulfate is an ingredient that were not completely sold by. Its actually used to alleviate pain or help treat drug addicts, but its also believed to improve your sporting performance.

However, there simply havent been enough studies that show that Agmatine Sulfate is safe and effective. So we have to consider this to be an unreliable addition to Purge PRE V2.

Again, we dont see the need for Ornithine to be in Purge PRE V2. Especially as this pre-workout already contains an optimal dosage of Citrulline Malate, which is the better option.

So, if you havent guessed, Ornithine is basically believed to improve your nitric oxide levels. But its not as well studies as Citrulline Malate, so this isnt necessary in Purge PRE V2 in our honest opinion.

Another patented ingredient thats found in Purge PRE V2. This actually has some studies that back its use.

So what does it do? Well, AstraGin is believed to improve the absorption rate of other nutrients that its consumed with. So again, this is another bonus addition here.

Weve always had mixed opinions on Beta-Alanine; this is because it can improve your gym session, while causing a minor side effect (itchy and tingly skin).

If you dont mind feeling a bit tingly during your workouts, then you probably wont mind Beta-Alanine. But some people feel too distracted by this side effect.

So how does it benefit you? Well, Beta-Alanine has shown to improve your muscular endurance in a similar way to Creatine Monohydrate.

Ultimately, if you can handle the slight side effect, Beta-Alanine isnt a bad addition to a pre-workout supplement at all.

If theres one ingredient in Purge PRE V2 that we would remove, then it would be Betaine Anhydrous.

Why? Because studies have shown that it doesnt benefit you, while Betaine can also cause your breath and sweat to smell fishy. Were not joking either, this is an official side effect that is linked with this ingredient.

As a result, we cant consider Betaine Anhydrous to be a good addition here.

In terms of stimulants, you dont get much better than Caffeine Anhydrous. Its a pure form of Caffeine in powder form, making it the safest and most effective stimulant out there, in our honest opinion.

Think about it, people all over the world consume caffeine through coffee and tea on a daily basis. But one thing that Caffeine Anhydrous can cause is jittery side effects when consumed in large dosages.

Now, Purge PRE V2 contains a nig 325mg dosage of Caffeine Anhydrous, which is worrying if you have a low tolerance to this stimulant. We, personally would be worried about suffering jitters regularly with this dosage.

For this reason, unless you consume more than 6 cups of black coffee per day, you might want to stick to consuming under 200mg Caffeine Anhydrous per serving (or choose a stim-free pre-workout).

We just mentioned that there was a big dosage of Caffeine Anhydrous in Purge PRE V2. Well, its worrying then, that this pre-workout also contains DiCaffeine Malate.

In our honest opinion, this is unnecessary and simply increases your risk of suffering jitters and energy crashes.

L-Tyrosine is one of the best ingredients you can find in Purge PRE V2; its shown to reliably improve your cognition, which is why its also found in nootropic supplements too.

So how does it benefit your workout? Well, L-Tyrosine can boost your mind-muscle-connection, helping you to make the most of every rep that you perform.

As a result, we consider L-Tyrosine to be a key addition to any pre-workout supplement that its added to.

Also known as N-Phenethyl Dimethylamine, this is believed to offer effects similar to that of stimulants to increase your energy levels and performance in the gym.

However, this isnt exactly a good thing; as we mentioned, Purge PRE V2 already contains a big dosage of Caffeine Anhydrous, as well as DiCaffeine Malate.

For this reason, Eria Jarensis just increases your risk of side effects, in our honest opinion.

Hordenine is another ingredient thats believed to act in a similar manner to stimulants; its thought to encourage your body to release more adrenaline, which might improve your sporting performance.

However, as weve said about 100 times by now, as Purge PRE V2 contains an overload of stimulants already, Hordinine increases your risk of side effects further. So it goes without saying that we would rather not have this here. 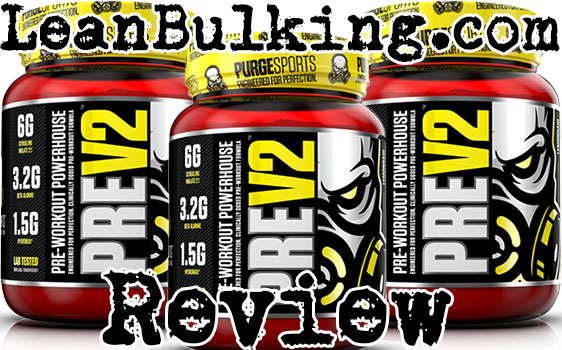 As youll know if you read our review instead of skimming, our main concern with Purge PRE V2 is that it contains many stimulants; this can cause jittery side effects, especially if you have a low tolerance to stimulants.

On a lesser note, we cant ignore that Beta-Alanine can cause itchy or tingly skin. Although, we have recently learned to ignore this side effect during our gym session okay (at first, we didnt like it though).

Here are the potential side effects from taking Purge PRE V2:

Its clear to see that Purge Sports have researched the ingredients added in this pre-workout and attempted to create an effective product. However, Purge PRE V2 hasnt quite met our expectations.

Dont get us wrong, there are many great features of this pre-workout; it contains an optimal 6,000mg dosage of Citrulline Malate, as well as brain-boosting L-Tyrosine. Even Beta-Alanine can be seen as a solid positive, as its shown to benefit your muscular endurance.

However, we dont understand why there was any need for such an overload of stimulants to have been added to Purge PRE V2. In our honest opinion, all you need in a pre-workout is a Caffeine Anhydrous dosage under 200mg.

Purge PRE V2 has many great features, which makes it worth looking at from first glance.

However, when you analyze this pre-workout closely, small issues begin to show up - such as the overload of stimulants that would put is at risk of jittery side effects.

For this reason, we wouldnt make Purge PRE V2 our main pre-workout of choice.