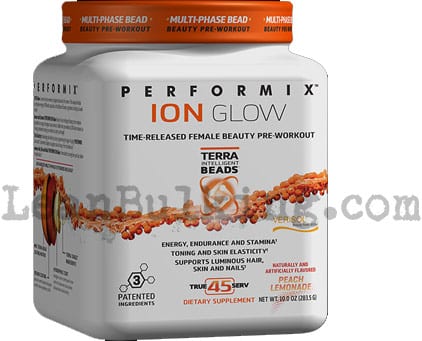 Ion Glow is a pre-workout supplement specifically aimed at women. It’s made by Performix, costs $67.99 for 45 servings, and comes in 2 flavors – Peach Lemonade and Strawberry Margarita.

Performix consider themselves to be a premium supplements company. All of their products come with their ‘terra bead’ technology, which is supposed to release ingredients slowly (which is why they call it ‘time released’.

They market a variety of supplements, but this is their product that’s specifically targeted at women. The question is, why can’t women use any other pre-workout? They answer is: they can, so there’s no need for ‘female only’ pre-workouts.

Immediately after looking at Ion Glow’s ingredient list, we can see something negative – all of it’s ingredients are part of 2 proprietary blends.

Proprietary blends are mixtures of numerous ingredients that are shown to you under one quantity (the Sustained Performance Blend and Ballistic Energy Matrix is 4,800mg in total).

This leads us our next point – these blends usually have fancy titles, to make you believe they’re better than they are.

But don’t be fooled: proprietary blends won’t be helping anyone achieve their summer body. Why? Because they’re usually ineffective.

Simply put, companies often use proprietary blends to cut costs – they can fill these blends with cheaper ingredients and you’ll never know.

This is why there are often ineffective ingredients mixed in with good ingredients. You’ll see what we mean after you read this section. 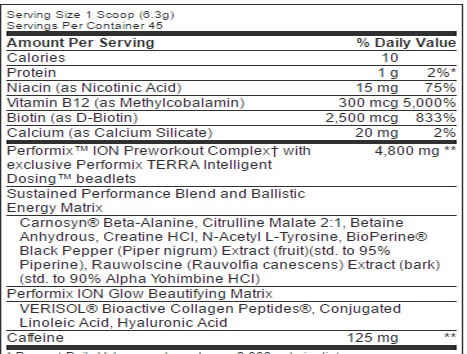 We have very mixed opinions about Beta-Alanine. Basically, it’s shown to enhance muscular endurance – but it causes paresthesia (see side effects section for more info).

This is one of our favorite pre-workout ingredients. It’s shown to enhance your muscle pumps but only in dosages of 6,000mg or above.

This is the problem – as Citrulline Malate’s part of a proprietary blend, no-one knows the exact dosage of it in Ion Glow (meaning it’s not likely to work in Ion Glow).

Betaine is the worst ingredient in Ion Glow – and is probably the ingredient filling most of this proprietary blend, as it’s ineffective.

It doesn’t offer any benefits, but it’s reported to cause fishy odors in your breath and sweat.

Hydrchloride is a form of creatine, but not our favorite one. Basically, Creatine Monohydrate is the most reliable version, as it’s been used since the 1990’s.

It’s also part of a proprietary blend, so there may only be a minimal amount in here anyway.

L-Tyrosine has shown to improve focus. However, it offers no other benefit to improve your gym session.

For this reason, we prefer L-Carnitine in a pre-workout – as it reduces fatigue and muscle damage, as well as improving focus.

This is simply the same stuff you put on your food. It makes food taste better, but can also improve the absorption rate of other ingredients it’s consumed with.

However, if it’s consumed with mostly ineffective ingredients, it won’t do much – it’s not a miracle ingredient, so it won’t make bad ingredients great again.

This molecule is similar in structure to Yohimbine. It basically promotes fat loss, but has been reported to cause numerous side effects.

Put it this way – Yohimbine’s been banned for causing harmful side effects in the UK and Canada, so it’s probably better to avoid Rauwolscine too.

As we’ve mentioned, Yohimbine is banned in numerous countries after causing harmful side effects. So we recommend avoiding this ingredient.

Caffeine is our favorite stimulant in a pre-workout, as it’s the most reliable and safe. Performix have done well by not overdosing caffeine like other companies do. 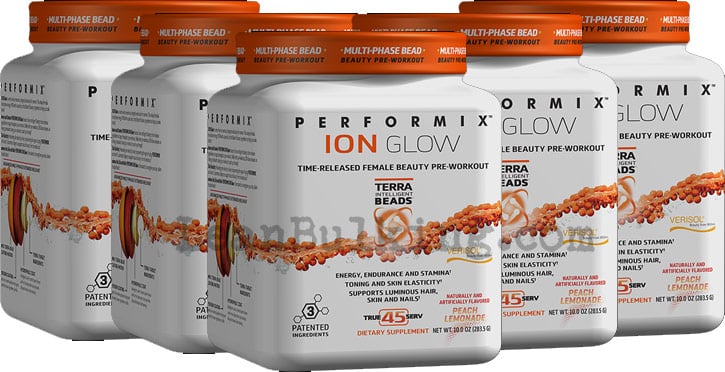 4 out of the 9 main ingredients can cause numerous side effects – which isn’t good.

This shows that Performix didn’t do their research when putting Ion Glow together. We recommend only consuming products that are free from side effects – so you get the most bang for your buck.

Here’s the potential side effects from taking Ion Glow:

Ultimately, females don’t need pre-workouts made for them. You can use any pre-workout on the market, so don’t let anyone tell you otherwise (if they do, they’re trying to fool you and make more money, which is what Performix have tried to do here).

Simply put, the best pre-workouts on the market can be used by anyone (regardless of gender). Obviously when it comes to clothes, you’re probably better buying clothes made for women. But this rule doesn’t apply to supplements.

No ingredient is gender specific – therefore you can take any supplement on the market safely (as long as it contains safe ingredients in sensible dosages).