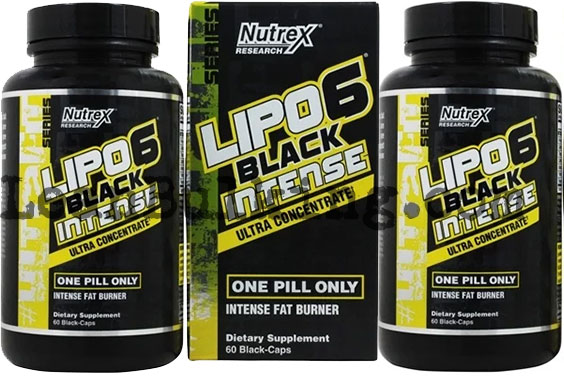 Lipo-6 Black Intense is a fat burner supplement by Nutrex. It costs $59.95 on their website and comes in 60 serving containers, with a serving size of 2 capsules per day - which isnt great (well expand on this below).

We prefer fat burners with serving sizes of 3-4 capsules daily; this allows your body to stay topped up throughout your day - with ingredients needed to get rid of your unwanted body fat. Only having 2 capsules per day will only positively affect you for a few hours and then stop working.

Anyway, well tell you a bit about Nutrex before analyzing the ingredients inside Lipo-6 Black Intense in the next section.

Nutrex are a sports nutrition company that was founded in 2002. Since then, theyve become a respected brand in the supplements industry - building a great reputation from their Lipo-6 fat burner series.

As this product is part of this popular fat burner series, we were excited to get our hands on it. When it arrived, we had a look at Lipo-6 Black Intenses nutrient profile immediately - well explain our thoughts and analysis below.

Lipo-6 Black Intense contains 7 ingredients overall; this isnt a bad number to have, and were glad there are no proprietary blends in this fat burner (meaning you can see the exact dosages of each ingredient inside).

However, we noticed that Lipo-6 Black Intense is missing numerous key fat burning ingredients - such as Green Tea Extract, Cayenne Pepper and Glucomannan.

Anyway, well analyze each ingredient inside Nutrexs fat burner; this will allow you to see how effective Lipo-6 Black Intense really is.

This is a brain-booster ingredient thats shown to improve your cognition. It doesnt cause any side effects, but its simply not as useful in a fat burner (as it has no effect on fat loss).

For this reason, while L-Tyrosine is a key ingredient in Nootropic supplements - its not needed in Lipo-6 Black Intense.

This is simply a mixture of Caffeine and Citric Acid. The only thing you need to know about this, is that its not as safe or reliable as Caffeine Anhydrous (which is why its not often used in fat burner supplements).

Simply put; Nutrex has tried to fix something that wasnt broken here - there isnt a problem with Caffeine Anhydrous (as long as its dosed correctly), so why try and replace it with something as unreliable as Caffeine Citrate?

Theacrine is another stimulant thats believed to offer similar benefits to Caffeine. However, its a fairly new discovery and hasnt proven to be 100% safe or reliable yet.

For this reason, we cant recommend this ingredient to you; but early signs are promising, so if we see evidence through human studies that it works, well update this review.

For now, Theacrine is an unreliable ingredient and Caffeine Anhydrous remains the king of stimulants (well expand on this just below here).

Weve been praising Caffeine Anhydrous for good reason - it works.

In fact, we consider this stimulant to be a key fat burning ingredient; Caffeine is proven to raise your energy levels while you cut calories and would otherwise be tired all day.

Ultimately, this makes your fat burning journey much easier for you, and allows you to perform at your best in the gym too.

But theres a problem; as Caffeine Anhydrous is part of a proprietary blend, no-one knows the exact dosages inside Lipo-6 Black Intense (meaning youre at increased risk of jitters and energy crashes).

This is more commonly known as Synephrine, and is on our list of ingredients to avoid. Simply put, Synephrine has been banned in the UK & Canada (among other countries) after causing harmful side effects.

For this reason, we avoid any fat burners or supplements containing this ingredient. There are plenty of effective ingredients that havent been reported to cause side effects - meaning theres no need to put your health at risk with Synephrine.

From bad to worse…Basically, Yohimbine is another ingredient on our blacklist. Its also been banned in the same countries as Synephrine for the same reasons (causing harmful side effects).

For this reason, we also advise you to stay away from supplements containing Yohimbine too.

This is the third worst ingredient in Lipo-6 Black Intense thats been consistently reported to cause side effects. Theres no need to consume ingredients that put your health at risk - when theres tried-and-tested safe nutrient such as Green Tea Extract and Cayenne Pepper Extract.

For a company as experienced as Nutrex, we would have expected Nutrex to have formulated Lipo-6 Black Intense to be more effective and with less risks of side effects.

Well be completely honest here; Lipo-6 Black Intense is one of the most potentially harmful fat burners weve reviewed.

Almost everything in this fat burner can cause side effects - and its even worse as every ingredient has been hidden inside a proprietary blend.

Ultimately, Caffeine Anhydrous is one of our favorite ingredients you can find in a fat burner supplement, but it becomes harmful when consumed in dosages over 200mg per serving.

Basically, theres nothing to prove theres a dosages lower than 200mg per serving, and as theres another 2 stimulants in Lipo-6 Black Intense - we have to assume that this fat burner will cause jitters and energy crashes.

The list of side effects for the other ingredients is too big to put into sentences, so well show you below.

Heres the potential side effects from taking Lipo-6 Black Intense:

As we mentioned above; Lipo-6 Black Intense is actually one of the most potentially harmful fat burner weve reviewed.

Why? Answer: Every ingredient is hidden in a proprietary blend, so you dont know the exact dosages of each ingredient inside. This is a problem when a supplement contains stimulants - stimulants cause side effects such as jitters and energy crashes in large dosages (over 200mg Caffeine per serving).

Not only that, Lipo-6 Black Intense contains 3 ingredients that are banned in numerous countries for causing harmful side effects - Synephrine, Yohimbine & Rauwolscine.

Ultimately, know for a fact that there are much safe and more effective fat burners on the market. So theres no need to risk your health trying to lose body fat with Lipo-6 Black Intense.

Lipo-6 Black Intense is more likely to cause side effects than help you burn fat - making it very likely to be a waste of your money.

For this reason, we recommend you to look at the best fat burners on the market.

1
Check Out The Best Fat Burners This Year!