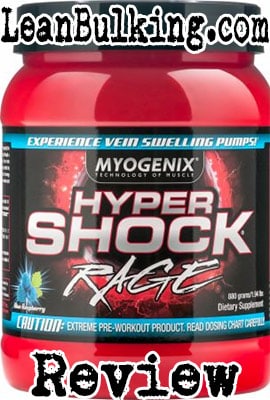 Hypershock RAGE is a pre-workout supplement made by Myogenix. It costs $36.43 for 40 servings and comes in 2 flavors - Blue Raspberry and Furious Fruit Punch.

We wont lie; neither of these flavors sounded great. And after choosing the Blue Raspberry,Hypershock RAGE didnt taste great either - so were hoping the ingredients prove its better than it tastes…

Myogenixs website was one of the worst weve seen in a while. In fact, after clicking from google, we were taken to a 404 unavailable page…something that shouldnt be happening if they want to make sales…

Anyway, they didnt have an about us section either; for this reason, we didnt learn anything about this supplements company (apart from that they were based in the USA).

But one thing we know are the ingredients inside, so lets take a look below.

Proprietary blends are mixtures of numerous ingredients thatre only shown to you as 1 quantity. As you can see from the Hypershock Proprietary Blend on its ingredient list, the overall amount is 20g - but youre not shown the dosages of each ingredient inside such as Caffeine.

Now that you know why we dont like proprietary blends; well take you through the most important ingredients in Hypershock RAGE (instead of going through each individual nutrient, or well be here all day).

Just remember that you dont know the exact dosages of each ingredient here in Hypershock RAGE.

So lets get started…

This is usually a very effective ingredient at enhancing your muscle pumps (by raising your nitric oxide levels, which increases your blood flow).

However, as L-Citrulline is part of a proprietary blend, its not known whether its been dosed optimally - meaning its likely to be ineffective in Hypershock RAGE.

This is a great example of why proprietary blend shouldnt be used by companies.

The reason why L-Citrulline is usually effective, is because it turns into L-Arginine in your kidneys. However, L-Arginine doesnt offer the same benefits when orally consumed.

Why? Answer: Because L-Arginine has a poor absorption rate - meaning its useless in supplements.

The worst thing is this; as L-Arginine is part of a proprietary blend, it might be taking up most of Hypershock RAGE without you knowing - meaning Hypershock RAGE would be mostly ineffective and a waste of money.

Another great example of why you should avoid supplements containing these blends.

Were tired while writing this review, and all we want to do is sleep…so this might not have been explained very well - but all you need to know is Agmatine Sulfate is another useless ingredient inside Hypershock RAGE.

Now, weve grouped all the different forms of Creatine in 1 group here - to save us time writing, and you time from getting bored as hell.

Anyway, all you need to know is this; the only tried-and-tested form of Creatine in Hypershock RAGE is Creatine Monohydrate.

It would have been better for Myogenix simply to add Creatine Monohydrate dosed optimally (at least 1,000mg per serving). But theyve failed to do this…

Beta-Alanine always has mixed opinions; it can improve your muscular endurance, but it also causes a side effect called paresthesia.

Whats paresthesia? Well, its a tingling and itching sensation on the skin of your face and body - something we find very distracting when trying to focus in the gym.

For this reason, we try to avoid pre-workouts containing Beta-Alanine. But well never criticize a product purely because it contains this ingredient (as we acknowledge that others like it).

These arent going to improve your workout - but they might help you maintain muscle mass while working out. However, BCAAs are more effective when taken after your workout (which is why BCAAs are part of almost every protein powder).

We prefer taking BCAAs after our workout, and prefer buying it separately so we can consume it whenever we want. When BCAAs are in a pre-workout powder, youre restricted to only consuming them before your workout.

Weve grouped these 2 ingredients together as L-Theanine & Caffeine form a smart-caffeine when consumed together. This means that L-Theanine enhances the benefits of Caffeine in smaller dosages.

Why is this good? Well, this is usually good, as it allows companies to add smaller dosages of Caffeine into their pre-workouts - keeping you safe from jitters and energy crashes.

However, as Caffeine is in a proprietary blend, there might be over 200mg Caffeine per serving inside Hypershock RAGE; this would cause jittery feeling and energy crashes.

Proprietary blends are bad anyway, but they become seriously dangerous when stimulants are added.

This is an organic acid containing sulfur. Many believe that Taurine boosts energy levels as its in many energy drinks - but studies have shown Taurine has no effect on energy levels.

But its not completely useless; Taurine has proven to help reduce cramping in the gym.

We prefer to stay hydrated anyway, which reduces cramping too - so theres not much need for Taurine here. 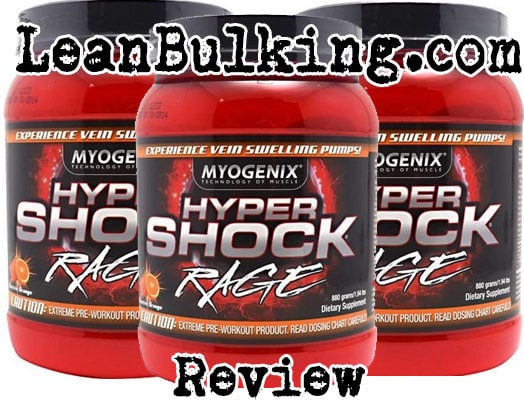 There are 2 things that can cause side effects in Hypershock RAGE; Beta-Alanine, and the fact this pre-workout contains Caffeine in a proprietary blend (meaning no-one knows the exact dosage inside).

Remember that Beta-Alanine can cause paresthesia (which is a tingling and itching sensation on your face and body). But thats not all…

Simply put, over 200mg per serving can cause jitters and energy crashes. For all we know, Hypershock RAGE could contain a much bigger dosage - which would only increase your risk of suffering from these side effects.

Heres the potential side effects from taking Hypershock RAGE:

Ultimately, we would never recommend any pre-workouts containing proprietary blends. These blends allow companies to hide ineffective dosages from you, and still charge the a regular or high price (as you wont know theyve cut corners).

Lets put it this way; if you spent money on quality items, youd take a picture and show your friends. This is similar to when supplement companies add optimal dosages, they always include it in their advertisements - if they dont or hide them in blends, then they havent.

Most of the time, proprietary blends are filled with ineffective ingredients and overloaded with Caffeine (or other stimulants). This simply increases your risk of suffering from jitters and other side effects, as well as wasting your money.

Hypershock RAGE isnt likely to improve your gym sessions, but it can potentially ruin it by causing side effects such as jitters or energy crashes.

We recommend that you save your cash and look at better pre-workouts on the market.