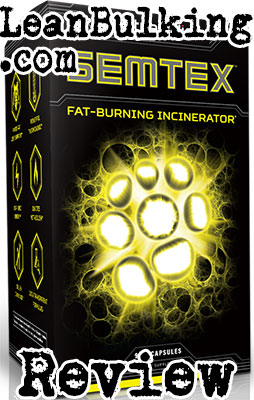 SEMTEX is a fat burner supplement made by Nutrabolics. It comes in 30 serving containers, with a serving size of 3 capsules per day; this is great, as the optimal serving sizes to keep you body topped up are 3-4 daily capsules spread throughout the day.

From first glance, we’re glad that Nutrabolics SEMTEX doesn’t contain any proprietary blends. This means you can see the exact dosages inside this fat burner, which is important when checking how safe and effective a supplement is.

Anyway. we’ll expand on this more in the next section. But first, we’ll tell you more about Nutrabolics.

Nutrabolics are a USA-based supplements company that were founded in 2002 by a ’21-year-old entrepreneur’.

Ultimately, while this company was set up by 2 college drop-outs, they’ve built an extremely respected business here. You only have to look at the list of sponsored athletes to see this; Khabib Nurmagomedov, Melissa Le Man, and Henri-Pierre Ano.

We’ve reviewed their other products before, such as their pre-workout called Aggro. However, you’re here to learn more about this fat burner, SEMTEX, so let’s see which ingredients are inside below…

Nutrabolics SEMTEX contains 8 ingredients overall; this is a good number of nutrients to have, as we see that products containing over 10 are usually under-dosed.

Ultimately, we’d rather have less ingredients, as long as their dosed optimally. So we’ll be keeping a close eye on the dosages of each nutrient in Nutrabolics SEMTEX.

As we mentioned, our first impressions of this fat burner are quite mixed; it contains some great nutrients such as Caffeine Anhydrous & Cayenne Pepper Powder, but these are alongside potentially harmful ingredients like Bitter Orange Extract.

Not only that, Nutrabolics SEMTEX contains 3 stimulants; you only need an optimal dosage of Caffeine Anhydrous in any supplement, and adding more stimulants only makes it likely that you’ll suffer from jittery side effects.

Anyway, we’ll explain everything in more detail in this section, by taking you through each ingredient. This will show you how safe and effective Nutrabolics SEMTEX really is.

The Dendronium species of plants have been used in East Asia for decades. They are believed to possess medicinal properties, however, there hasn’t been enough modern or human studies conducted yet.

For this reason, we have to consider Dendrobium Nobile as an unreliable ingredient for now. We’ll keep this page updated if we find out more in the future.

Again, this is another unreliable ingredient, as no-one knows a great deal about it.

But it’s worrying that supplement companies still add this into their supplements regardless of this; personally, we’d prefer to consume nutrients that are tried-and-tested to be safe and effective without taking our chances.

Anyway, all you need to know about Phenylethylamine, is that it’s able believed to be able to influence formones such as dopamine and serotonin. This could increase your mood, but no studies have shown it to be effective at the time you’re reading this.

Caffeine Anhydrous is the best stimulant you can find in any supplement. In case you’re wondering what it is, the ‘anhydrous’ simply means caffeine has been dehydrated into powder form, so it can be added into supplements.

It’s proven to be safe and effective, and is safe from side effects when consumed in dosages less than 100mg per capsule in fat burner supplements.

For this reason, this would have kept you safe jittery side effects. However, we can also see that Nutrabolics has added 2 other stimulants, Theobromine & Theacrine.

This isn’t a good thing, as consuming too many stimulants can cause jitters and energy crashes (if you’ve consumed too much coffee before, you’ll know the feeling).

For this reason, we advise you to only consume fat burners containing under 100mg Caffeine Anhydrous per capsule as it’s only source of stimulant – to stay safe.

We just mentioned that this is another stimulant inside Nutrabolics SEMTEX. But you might not know what it is.

Basically, Theobromine is the stimulant found in cocoa beans; it’s responsible for that ‘buzz’ you get after eating quite a lot of chocolate (as well as the load of sugar you’ll have consumed…)

Anyway, after reading the Caffeine Anhydrous analysis above, you know that consuming too many stimulants is a bad idea.

There’s a high chance that you’ve eaten a Cayenne Pepper before. Well, it would have been a very spicy experience, and you would have started to sweat and asked for some milk to cool you down.

Simply put, Cayenne Pepper Powder’s ability to raise your body temperature is exactly how it boosts your metabolism. As your body as to work harder to cool itself down, it burns more calories in the process.

Ultimately, this all leads to this nutrient helping you to lose fat. You don’t need studies to prove that it works, because it’s very common knowledge that it does (but human studies have proven that it works…)

For this reason, we consider Cayenne Pepper Powder to be a key addition to any fat burner supplement. Good job by Nutrabolics here.

Theacrine is another stimulant that we briefly mentioned before. Well, it’s similar in structure to caffeine, which means it’s able to raise your energy levels too.

However, you know that consuming large dosages of stimulants is a bad idea; it leads to side effects such as jitters and energy crashes.

Not only that, Theacrine hasn’t been researched much, meaning it’s also quite reliable.

But we will acknowledge that it might be useful in the future; early signs suggest that humans don’t build much tolerance to Theacrine, meaning it could be beneficial during longer term use.

Again, we’ll repeat that it’s unreliable while you’re reading this review. But we’ll keep you updated in the future.

Now, this is the most controversial addition to Nutrabolics SEMTEX.

Also known as Citrus Aurantium, Bitter Orange Extract contains high amounts of Synephrine (which has been banned in numerous countries such as the UK, Canada, with even the FDA warning people against it).

However, companies found a loophole by adding Bitter Orange Extract to their supplements; this allows them to add Synephrine to their products, without getting stuck with legal issues, for now.

We assume it’s only a matter of time before Bitter Orange Extract becomes a banned substance too.

Why? Because it’s been commonly reported to cause harmful side effects (which we’ll expand on in the side effects section further down in this review).

For this reason, we always advise you to avoid supplements containing Bitter Orange Extract – to stay safe.

In case you’re wondering, yes, this is the same stuff that you sprinkle into your food to make it taste better.

But you might not know that Black Pepper Extract is able to increase your digestion and absorption rate of supplements. As a result, we consider it as a useful addition to Nutrabolics SEMTEX (and we’d rather have this than Bitter Orange Extract).

However, we do acknowledge that it’s not a key addition to any fat burner supplement. Instead, think of it as a useful ‘bonus’ to have. 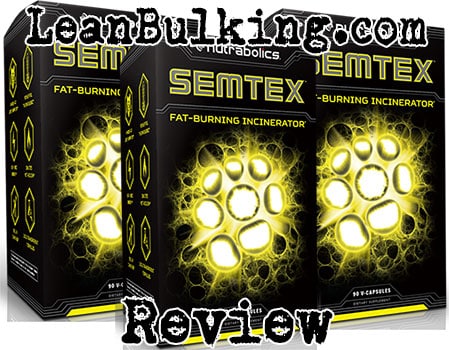 As we’ve mentioned, the 2 risks from taking Nutrabolics SEMTEX are due to this fat burner containing Bitter Orange Extract and 3 stimulants.

Also, if Nutrabolics SEMTEX only contained Caffeine Anhydrous as it’s only source of stimulant then it would have been fine. However, this fat burner also contains Theobromine & Theacrine, which make it likely that you’ll suffer from jittery side effects.

For this reason, we always advise you to avoid supplements containing Bitter Orange Extract. And also to stick to fat burners only containing under 100mg Caffeine Anhydrous as their only source of stimulant.

Here’s the potential side effects from taking Nutrabolics SEMTEX:

However, you can’t ignore the fact that it also contains an overload of stimulants and Bitter Orange Extract. As you can see from the potential side effects above, it’s not worth risking your health while on your mission to burn fat.

There’s no denying Nutrabolics are a respectable company. However, Nutrabolics SEMTEX isn’t one of their best products.

Nutrabolics SEMTEX would have been great, if it didn’t contain 3 different stimulants and Bitter Orange Extract.

However, it’s these small mistakes that can cause side effects and affect the quality of a fat burner.

For this reason, we can’t recommend you to try Nutrabolics SEMTEX, and you’d be benefitted more by taking a look at the highest rated fat burners on the market.