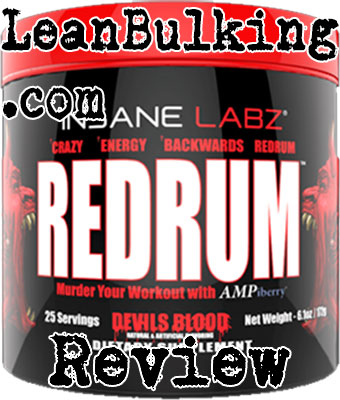 REDRUM is a pre-workout supplement made by Insane Labz. They’ve become a popular brand in 2017 onwards, so it’ll be interesting to see whether this product can improve their growing reputation.

This pre-workout comes in 25 serving containers, at the price of $59.95 on their website. At the time of writing, it’s not being sold on GNC, Bodybuilding.com or Amazon, but that could change in the future.

Anyway, we’ll analyze REDRUM’s nutrient profile for you in the next section. But first, we’ll tell you more about the company behind it.

We’re not sure when this supplements company were founded (it doesn’t tell you on their website). But their products become very popular in 2017, so we’re guessing they’re relatively new to the industry.

As their popularity has grown, so has their reputation. So we’re expecting big things from REDRUM to continue their rise.

One way to check how good this pre-workout is, is by analyzing it’s ingredient list, which is what we’ll do below…

REDRUM contains 7 main ingredients overall, which we’ll be analyzing for you today. This is a good number of nutrients to have, as we usually find that products containing over 10 ingredients are under-dosed.

However, you won’t be able to check the exact dosages of each ingredient inside REDRUM, as they’re hidden inside a HUGE proprietary blend (we’ll explain why this is a bad thing below).

Proprietary blends are mixtures of numerous ingredients that’re only shown to you as 1 quantity. As you can see from the ‘REDRUM Blend’ on its ingredient list, the overall amount is 4.8g – but you’re not shown the dosages of each ingredient inside such as Di-Caffeine Malate.

Anyway, now that you know why we don’t like proprietary blends. We’ll take you through each ingredient inside REDRUM, so you can see how effective this pre-workout really is. 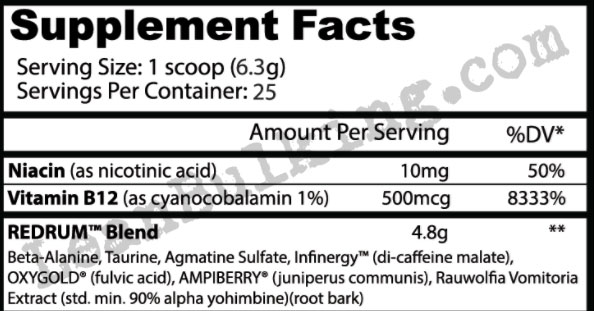 Beta-Alanine is a molecule that’s shown to enhance your muscular endurance. However, some people either love it or hate it, as it’s also known for causing itchy & tingly skin.

This side effect is known as paresthesia, and it’s why we personally avoid Beta-Alanine.

But again, we acknowledge that it is beneficial too; so it’s up to personal preference whether you choose to consume supplements contianing this ingredient.

Taurine is an organic acid containing sulfure (not bull’s urine, like some people believe). It’s also mistakenly believed to boost your energy levels, but no study has shown it’s able to deliver this benefit.

Ultimately, Taurine isn’t a stimulant. But that doesn’t mean it’s useless; there’s evidence that Taurine is able to reduce cramping.

Although you could keep yourself hydrated to experience this same benefit, Taurine can be a great ‘bonus’ addition to any pre workout supplement.

This is extracted from L-Arginine thorugh a chemical process known as ‘decarboxylation’. However, while this might sound fancy, studies haven’t shown it to be very beneficial at improving your gym sessions.

The main benefit from taking Agmatine Sulfate is to reduce pain levels, and it’s also used to treat drug addiction too.

As you can see, this isn’t something that’s necessary in REDRUM, so we consider this to be an ineffective addition here. Ultimately, we would have rather seen Citrulline Malate, which has provne to enhance your muscle pumps in the gym.

In case you’re wondering, this is simply Caffeine mixed with Malic Acid; the Malic Acid helps improve your strength & endurance, as it raises your ATP levels (in a similar way to Creatine Monohydrate).

However, the main problem is that Di-Caffeine Malate is part of a proprietary blend. This means that you don’t know the exact dosage of Caffeine in REDRUM, increasing your risk of suffering from side effects such as jitters and energy crashes.

For this reason, we always advise you to avoid supplements containing proprietary blends. For general reference, we also recommend only consuming pre-workouts containing under 200mg Caffeine per serving, to stay safe.

You’ll see this listed as ‘Ampiberry’ on REDRUM’s ingredient list. This is because it’s a patented form of juniper berry.

While it’s known for being beneficial in old wives tales (folklore), it’s not proven to be reliable in any study.

For this reason, stick to adding this to your gin & tonic, instead of relying on it in a pre-workout supplement.

Also known as Rauvolfia Serpentina (or Devil Pepper), this is a flower found in India and East Asia.

It’s been investigated for its use in the treatment of hypertension. However, this has no effect on your performance in the gym, so it’s not really necessary in a pre-workout supplement such as REDRUM.

In fairness, 1 study has shown it to successfully lower blood pressure. But there hasn’t even been enough supporting evidence for this.

Not only that, Rauwolfia has shown to cause numerous side effects, which we’ll expand on in the section below. 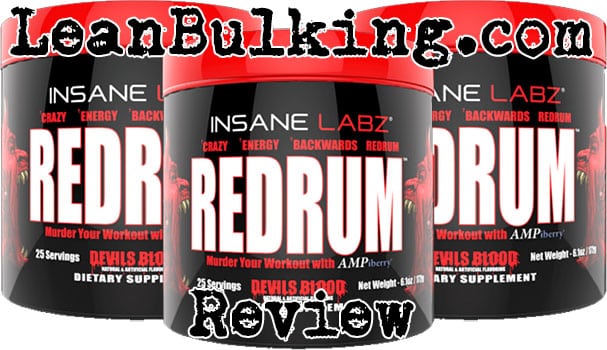 There are 3 things in REDRUM that can cause side effects; Di-Caffeine Malate being contained in an unspecified amount, Rauwolfia and Beta-Alanine.

We mentioned that Beta-Alanine can cause itchy & tingly skin (paresthesia). Any form of stimulant can cause jittery side effects when consumed in large amounts, and as Di-Caffeine Malate is part of a proprietary blend, no-one knows the exact dosage of it inside REDRUM.

We’ll include the side effects Rauwolfia can cause in a list below.

Here’s the potential side effects from taking REDRUM:

It’s never good news when a company adds every ingredient inside a supplement into a proprietary blend.

We’re tired of hearing excuses such as ‘others might steal our formula’; this is complete lies, as we’ve never seen a complete carbon copy of a product before (companies know they’ll lose a lot of money being sued if they actually tried to steal a formula).

As a result, most people in the industry know that proprietary blends are used for one reason – to make a supplement look better while keeping the costs down.

Not only that, REDRUM doesn’t even contain any key pre-workout ingredients; we prefer to see nutrients such as Citrulline Malate, which has proven to enhance your muscle pumps in the gym.

Simply put, the only really beneficial ingredient in REDRUM is Beta-Alanine. But even this can cause itchy and tingly skin.

REDRUM is lacking worthwhile nutrients necessary to improve your performance in the gym.

You’re more likely to suffer from side effects when taking this pre-workout, so we recommend looking at the highest rated pre-workouts on the market instead.