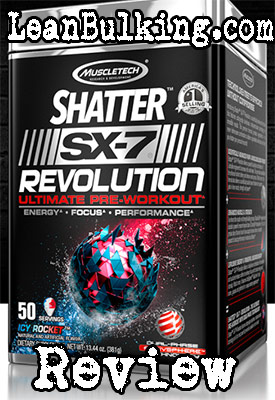 Shatter SX-7 Revolution is a pre-workout supplement made by MuscleTech. It costs $69.99 on GNC.com (at the time of writing this review) for 50 serving containers.

This is quite alot of servings, so its not as expensive as it looks - Shatter SX-7 Revolution is very similarly priced to other premium fat burners serving to serving.

Anyway, well analyze MuscleTechs pre-workout after telling you about this company (for those new to supplements).

If you know about supplements, then youll know about MuscleTech; its one of the biggest sports nutrition brands in the industry.

But theyre also building a name for themselves in other areas. This is what gained our attention with Shatter SX-7 Revolution; were interested in seeing whether this can help them dominate the pre-workout market too.

When looking at Shatter SX-7 Revolutions ingredient list, were happy that this pre-workout doesnt contain any proprietary blends (meaning you can see the exact dosages of each ingredient inside).

For this reason, were able to accurately analyze its nutrient profile for you - and show you how effective Shatter SX-7 Revolution really is. 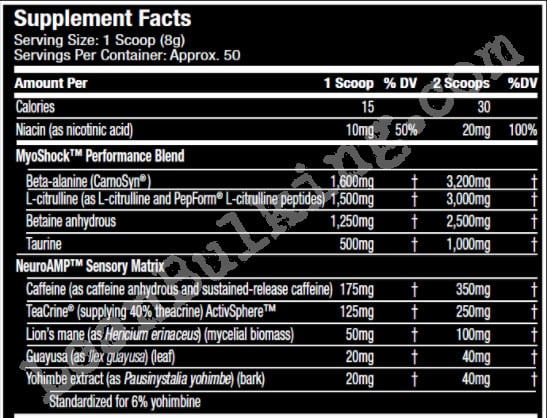 Everyone has mixed opinions about Beta-Alanine; its shown to improve your muscular endurance, but causes a side effect called paresthesia.

Whats paresthesia? Answer: a tingling and itching sensation on the skin of your face and body. Its distracting when youre trying to focus in the gym, so personally, we avoid Beta-Alanine.

However, well never completely criticize a pre-workout just because it contains this ingredient (as we mentioned, it can be beneficial).

For this reason, we wont advise you to stay away from Shatter SX-7 Revolution because of Beta-Alanine. But personally, its something that puts us off.

L-Citrulline is a great addition to any pre-workout supplement.

Although we prefer Citrulline Malate (L-Citrulline mixed with Malic Acid, which improves your muscle pumps and strength in the gym), L-Citrulline is still beneficial on its own too.

However, when taking L-Citrulline, studies have shown that a dosage of 3,000mg is needed for it to work. As you can see from Shatter SX-7 Revolutions ingredient list, this pre-workout only contains 1,500mg (meaning its not likely to work here).

We mentioned that we prefer Citrulline Malate, so if youre looking for this, youll need at least a 6,000mg dosage for it to be effective.

From good to bad…Betaine is one of the ingredients we always avoid.

Heres why; Betaine is a useless ingredient that hasnt shown to offer any benefits in studies. But it causes a strange side effect - fishy smells from your breath and sweat.

We dont want to smell like a fishcake while pumping iron in the gym. And as it doesnt do anything to improve our workouts, theres no reason why you should suffer this side effect.

The only positive here, is that MuscleTech hasnt added Betaine into a proprietary blend, so we do credit them for that.

Taurine is an organic acid containing sulfur (not bull-urine like some think it is).

Another myth well break now; Taurine hasnt shown to boost your energy levels in any studies (but some believe it does, as its inside energy drinks).

The real reason why Taurine is inside energy drinks - its able to calm you down slightly while taking big dosages of caffeine (but it wont stop you from suffering jitters or energy crashes).

Although Taurine has shown to reduce cramping, you can still achieve this benefit simply by keeping yourself hydrated in the gym. So its not really needed in Shatter SX-7 Revolution.

Everyone knows what Caffeine is; its consumed in tea & coffee everyday, around the world!

So you can be safe knowing its safe - when consumed in dosages under 200mg per serving. So what does it do? Answer: its able to improve your strength, endurance, focus and energy levels in the gym (all key benefits to enhance your workout).

MuscleTech has done well here by adding a good 175mg serving of Caffeine. This would have kept you safe from jitters and energy crashes, but theyve also added another stimulant (which well analyze below).

Theacrine is another stimulant thats believed to offer similar benefits to Caffeine. However, this is a bad thing - as MuscleTech has already added enough Caffeine in Shatter SX-7 Revolution.

For this reason, you have a higher chance of suffering from jitters and energy crashes here.

This is a mushroom also known as Yamabushitake; its shown to boost your cognition, which is why its used in Nootropic supplements.

However, its not as useful in pre-workout supplements - Caffeine offers enough boost to your focus in the gym, so Lions Mane isnt needed here.

Weve not seen this ingredient in pre-workouts before Shatter SX-7 Revolution. Its basically the leaves taken from the Guayusa tree, but what isnt good, is that its another stimulant.

We mentioned that theres already an overload of stimulants with Caffeine & Theacrine both inside MuscleTechs pre-workout. But Guayusa added makes it almost certain that youll suffer from jitters and energy crashes.

Yohimbe Extract is by far the worst ingredient inside Shatter SX-7 Revolution. Its a subset of Yohimbine (which isnt good, since this has been banned in numerous countries after causing side effects).

Simply put, Yohimbe Extract has also shown to cause potentially harmful side effects - so this is something we advise that you avoid.

In fact, we believe this will also be banned in the future.

We probably sounds like weve been quite harsh in this review. But you cant argue with us after reading our analysis of Shatter SX-7 Revolutions nutrient profile.

Simply put, MuscleTech has added an overload of stimulants (3 different sources; Caffeine, Theacrine & Guayusa Leaf) - this makes it almost certain that youll experience side effects such as jitters and energy crashes.

Not only that, Betaine will make your breath and sweat smell fishy. And Yohimbe is likely to cause numerous side effects, which well bullet point below.

Heres the potential side effects from taking Shatter SX-7 Revolution:

MuscleTech are very well respected in the supplements industry. But they havent done a great job when formulating Shatter SX-7 Revolution.

Dont get us wrong, they might have purposefully made this pre-workout to be powerful by adding 3 different sources of stimulants in big dosages. However, this only makes it likely for you to suffer from jitters and energy crashes.

Personally, we prefer pre-workouts that contain under 200mg per serving of Caffeine; this ensures that you benefit from energy boosts in the gym, without any jittery feelings or feeling exhausted halfway through your gym session.

Not only that, we always stay away from supplements containing Yohimbe; this ingredient is believed to promote fat loss, so its not even needed in Shatter SX-7 Revolution anyway.

Shatter SX-7 Revolution is more likely to cause side effects, than actually benefit your gym session.

We recommend saving your cash and taking a look at the best pre-workout supplements on the market.