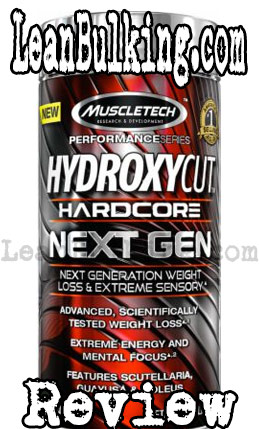 Hydroxycut Hardcore Next Gen is a pre-workout supplement made by MuscleTech. It costs $35.99 for 50 servings, with a serving size of 2 capsules per day.

This might seem like a lot of servings per container for the price, but 2 capsules per day isnt likely to do much - its better to consume 3-4 capsules spread throughout your day so your bodys constantly topped up with key ingredients needed to burn body fat.

MuscleTech are a reputable supplements company thats been around for a while now. Theyre probably most well-known for their Hydroxycut fat burner series (which Hardcore NEXT GEN) is part of.

However, they also market other products, such as pre-workout supplements and protein powders.

Hydroxycut Hardcore Next Gen contains 7 main ingredients, but only 2 are key fat burning ingredients proven to work (Caffeine & Green Coffee Bean Extract). Unfortunately, the rest are unreliable, with Yohimbe considered potentially harmful in the UK and Canada (and been banned as a result).

So our first impressions of this arent great, but lets take a deeper look and see if the this fat burner can change our mind. 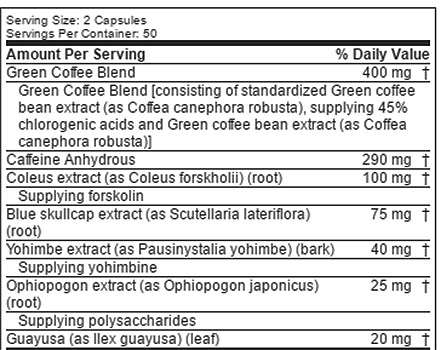 Were not sure why MuscleTech have called Green Coffee Bean Extract a blend, but this is simply one ingredient that theyve tried to make look better. Which is strange as this is one of the few great ingredients in Hydroxycut Hardcore Next Gen.

Green Coffee Bean Extract is one of our favorite fat burning ingredients, as it raises your metabolism and encourages your body to burn body fat for fuel - and its proven to work in countless studies.

Wed prefer a dosage of 500mg, but this 400mg dosage in Hydroxycut Hardcore Next Gen will still be effective.

Another good job by MuscleTech by adding an optimal dosage of Caffeine here (anything near 300mg per daily serving is great). However, as Hydroxycut Hardcore Next Gen only has a seriving size of 2 capsules per day, this means youre getting a huge 145mg Caffeine serving per capsule.

To put this into perspective, this is a normal Caffeine dosage for a pre-workout (which is supposed to get you PUMPED for your workut. You dont want to be sat at your day job with this amount of caffeine per capsule, but itll be good if you only use it before a workout…

For this reason, we prefer a Caffeine serving per capsule below 100mg - so you experience steady energy boosts without spiking and experiencing an energy crash.

Apart from the second part of this ingredient being dangerously similar to foreskin, this actually seems like a promising ingredient. One or two studies have shown that it can promote fat loss and boost testosterone in 250mg dosages.

But there are 2 problems here:

As a result, Coleous Forskohii isnt likely to do much in Hydroxycut Hardcore Next Gen - which is a shame, as this is the first ingredient thats not been consistently proven to work that were actually slightly convinced might work in optimal dosages.

Also known as Scutellaria Baicalensis, this has been used in traditional Chinese medicine to improve cognition and general health. However, no study has shown that it works - making this an unreliable ingredient.

This is the worst ingredient inside Hydroxycut Hardcore Next Gen as its been banned in numerous countries after causing harmful side effects (see side effects section below for more info).

While its shown to promote fat loss, its not worth risking your health for - especially when there are better ingredients proven to work (such as Green Tea Extract, although its not inside this fat burner here).

Simply put, this is believed to positively affect blood glucose levels, but it hasnt shown to do anything in studies.

This is basically a carbohydrate molecule, so itll probably improve your energy levels slightly (like consuming any carbohydrate source would). However, theres only 20mg of this in Hydroxycut Hardcore Next Gen, so its not actually likely to do much in this tiny dosage.

Theres one ingredient in Hydroxycut Hardcore Next Gen that consistantly causes side effects - Yohimbine. In fact, its been banned in the UK and Canada for this reason, and we try to avoid it.

However, apart from Green Coffee Extract and Caffeine, the rest are unreliable and wont help you lose body fat.

Heres the potential side effects from taking Hydroxycut Hardcore Next Gen:

For a company as reputable as MuscleTech, we were expecting a better fat burner.

We were disappointed that Hydroxycut Hardcore Next Gen only contained 2 tried-and-tested ingredients (Green Coffee Bean Extract & Caffeine), with the rest being unreliable to work - not forgetting Yohimbe, which has been reported to cause harmful side effects and banned in numerous countries.

In our honest opinion, we believe there are much better fat burners for you to choose from - to get the most for your hard-earned cash.