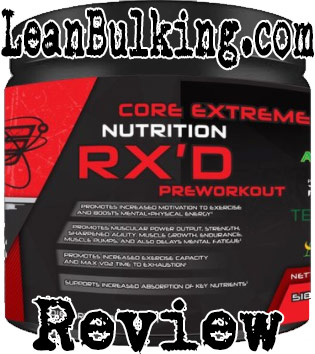 CORE RXD is Core Nutritions latest release in 2017. Its a pre-workout supplement that costs $49.99 for 30 servings and only comes in a Bombsickle flavor.

Before we analyze the CORE RXDs nutrient profile, well tell you a bit about the company below.

Who are Core Nutritionals?

Core Nutritionals are a supplements company based in the USA. It was started in the 2000s and has since sponsored numerous mid-level athletes; such as Kristie Von Wollingen, Taisha Bella & Mike Orta.

But youre here to learn about CORE RXD - and well give you everything you need to know in the next section.

Proprietary blends are mixtures of numerous ingredients thatre only shown to you as 1 quantity. As you can see from the PeakO2 Blend on its ingredient list, the overall amount is 2g (2,000mg) - but youre not shown the dosages of each ingredient inside such as Cordyceps.

However, there are some positives; CORE RXD contains an optimal dosage of Citrulline Malate.

Anyway, well take you through each ingredient in this pre-workout - so you can see how good it really is. 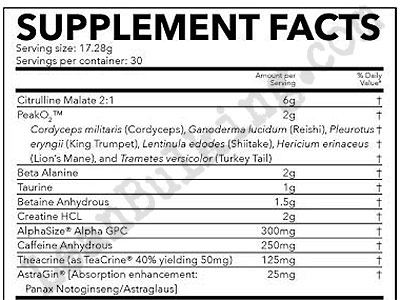 Great start by Core Nutritionals; Citrulline Malate is one of our favorite pre-workout ingredients, as it improves your muscle pumps in the gym.

Not only that, Citrulline Malate has been optimally dosed here (6,000mg per serving) - meaning itll definitely work.

As weve mentioned, this is the proprietary blend inside CORE RXD. It contains 6 different types of mushrooms believed to promote improve your strength and sporting performance.

Anyway, well give you a brief overview of each nutrient inside this blend:

This ingredient always splits opinions on the LeanBulking website. Simply put, Beta-Alanine has shown to enhance muscular endurance - but its also shown to cause a side effect called paresthesia.

Basically, paresthesia is a tingling and itching on the skin of your face and body. Personally, we dont like this side effect as we cant concentrate on our gym session while suffering from paresthesia.

For this reason, we try to avoid pre-workouts containing Beta-Alanine; however, we never criticize a supplement just for this ingredient, as we accept others dont mind this side effect as much as us.

Taurine is an organic acid containing sulfur (not bulls urine, like some believe). However, its also mistakenly thought to boost your energy, as its contained in popular energy drinks.

It offers 1 benefit - reducing your cramping in the gym. However, as this benefit is achieveble from simply drinking enough water, we dont think Taurine is needed in pre-workout supplements.

This is one of the worst ingredients you can find in pre-workout supplements. Simply put, its known to cause a strange side effect - causing you to have fishy breath and sweat.

Not only that, Betaine hasnt shown to offer any benefits in any studies conducted on it. This means Betaine is a useless ingredient that causes a side effect.

Creatine can be a key ingredient in any pre-workout; its proven to boost your strength and endurance in the gym.

However, there are different forms of Creatine, and the one inside CORE RXD is Creatine Hydrochloride; while this is believed to be more water soluble, its not as reliable as Creatine Monohydrate (which has been used since the 1980s.

This is a cholergenic compound thats believed to improve your cognition. However, its also shown to cause numerous side effects - which is why we try to avoid supplements containing Alpha-GPC (see side effects section for more info).

Caffeine is the best stimulant you can find in any pre-workout supplement. Its proven to improve your strength, endurance, focus and energy levels - all key benefits to enhance your gym session and help you make gains.

However, consuming large dosages of Caffeine can cause jitters and energy crashes (which is why many pre-workouts are known for causing these side effects).

As CORE RXD contains 250mg, this is on the border of being a safe dosage. Those sensitive to Caffeine might suffer from jitters and energy crashes, but those who drink over 4-5 coffees a day should be okay.

Personally, we prefer Caffeine dosages under 200mg per serving; this is safe for everyone, while providing benefits to improve your gym session.

This is another stimulant thats believed to offer similar benefits to Caffeine. But heres the problem; there hasnt been as much studies conducted on Theacrine (so its not 100% certain whether its safe or effective).

For this reason, wed choose Caffeine everytime - but theres another problem. As RXD already contains Caffeine, theres no need for more stimulants.

Ultimately, this increases your risk of suffering from jitters and energy crashes.

This is a mixture of 2 ingredients - Astragulus and Notoginseng. All you need to know about this ingredient, is that it hasnt shown to benefit your gym session in any studies (making it an ineffective ingredient in RXD).

We wouldve preferred to see a useful ingredient, such as L-Carnitine instead. 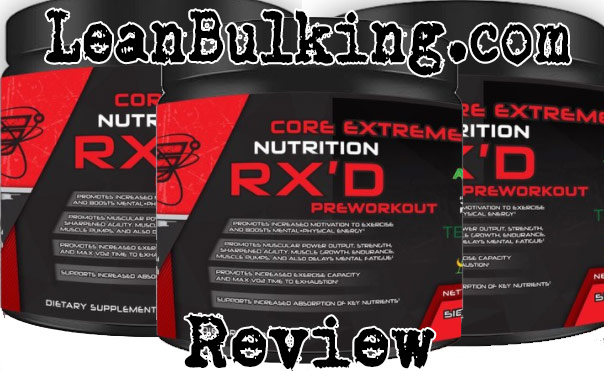 There are 3 things that can cause side effects in CORE RXD - Beta-Alanine, Alpha-GPC & the overdose of stimulants.

Simply put, Beta-Alanine can cause paresthesia, which is a tingling and itching sensation on your face and body. Alpha-GPC can cause numerous side effects (which well list below), and the over-dose of stimlants can cause jitters and energy crashes.

For this reason, we cant recommend CORE RXD to you. There are many safer and more effective pre-workouts available on the market.

Heres the potential side effects from taking CORE RXD:

Core Nutritionals are a respected brand in the supplements industry. However, theyve made some rookie errors when formulating this pre-workout, CORE RXD.

Simply put, its never good to have more than 1 stimulant in a pre-workout (with Caffeine being the safest option when dosed under 200mg per serving).

Not only that, theyve added a proprietary blend full of mushrooms that havent shown to benefit your gym session…This was never a good idea.

CORE Nutritionals decided to add a bunch of mushrooms into their pre-workout RXD, instead of useful ingredients such as L-Carnitine (in our honest opinion).

Along with the other mistakes made when formulating this product, we cant recommend this pre-workout.

Instead, take a look at the highest rated pre-workouts on the market here.