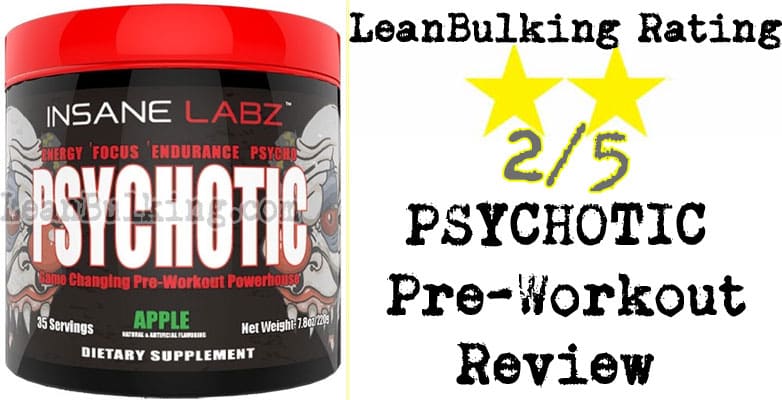 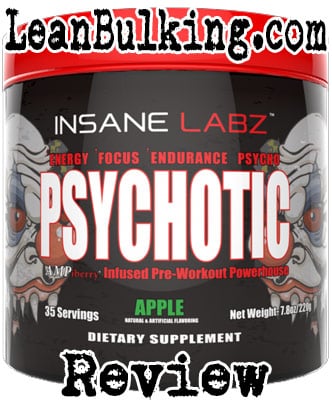 Psychotic is a pre-workout supplement made by Insane Labz. As you can tell by the name of this product, this company comes with a ‘mental asylum’ theme – their ‘about us’ section is even accompanied by a ‘scary’ mask!

This pre-workout costs $54.95 from their website – and we couldn’t find it on other reputable retailers such as GNC or Bodybuilding.com

The problem is, there wasn’t much information about Insane Labz on their ‘about us’ page…All we learned was that their products are made in GMP & FDA approved facilities – but every product is, so this shouldn’t be something they focus on.

We’ve also reviewed their other pre-workouts I AM GOD and Psychotic Gold, so you can check our reviews for those products out if you’re interested.

If you’re still with us, then let’s see which ingredients are inside Psychotic Pre-Workout

Psychotic Pre-Workout contains 9 ingredients overall, which isn’t a bad number to have in a product; we always prefer supplements to have under 10 ingredients, as long as their all proven to be effective and dosed correctly.

However, even from the first glance, we can see that Insane Labz has filled Psychotic Pre-Workout with potentially harmful ingredients to try and make it ‘more powerful’ (we’ll expand on this when we begin analyzing each ingredient in-depth later in this section).

Not only that, Psychotic Pre-Workout contains a proprietary blend – these are something we never want to see in supplements, and we’ll explain why below…

Proprietary blends are mixtures of numerous ingredients that are only shown to you as 1 quantity. As you can see from the ‘Psychotic Blend’ on its ingredient list, the overall amount is 4,459mg – but you’re not shown the dosages of each ingredient inside such as Caffeine.

Right, so we’ve given you a summary of the negative things. But there are a couple of positives about this pre-workout; it contains 2 key pre-workout ingredients, Caffeine and Creatine Monohydrate.

Anyway, we’ll take you through each ingredient inside Psychotic Pre-Workout – so you can see how effective this product really really is. 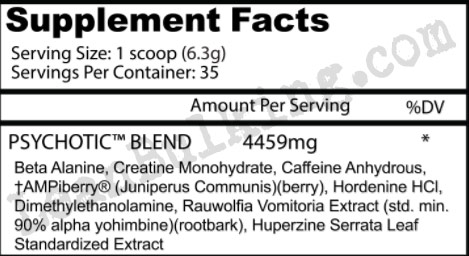 As we’ve mentioned, this is the proprietary blend that every ingredient inside Psychotic Pre-Workout has been filled into. Just remember that no-one knows the exact dosages of any ingredient in this blend.

We always have mixed opinions about this ingredient; simply put, it’s shown to enhance muscular endurance in the gym. However, it’s also shown to cause a side effect called paresthesia.

What’s paresthesia? Answer: it’s a tingling and itching sensation on the skin of your face and body. It’s not going to kill you, but it really distracted us from our gym session.

Personally, we have quite mixed opinions on this; at first, paresthesia really distracted us from our workouts. But after consuming pre-workouts containing Beta-Alanine regularily, we got more used to this sensation and now we don’t mind too much.

However, we do understand why others don’t like consuming Beta-Alanine. So if you don’t like Beta-Alanine, it’s good to know that Creatine Monohydrate offers the same benefit without causing any side effects (we’ll expand on this next).

But that’s not all; studies have shown that Creatine Monohydrate also delivers improved strength in the gym too.

For this reason, Creatine Monohydrate is a key pre-workout ingredient. But there’s a problem – we don’t know whether there’s a large enough dosage for this to work.

Basically, Creatine Monohydrate’s only shown to work in dosages of at least 1,000mg. As it’s part of a proprietary blend, no-one knows the exact dosage inside (meaning it might not work here).

Ultimately, this is a great example of why we recommend you to avoid supplements containing proprietary blends.

If you don’t know what ‘anhydrous’ means; it basically means Caffeine has been dehydrated into powder form (so it can be added into supplements).

Caffeine is one of the best ingredients you can find in these types of supplements; it’s proven to deliver benefits such as increased strength, endurance, focus, and energy levels – making it the perfect addition to a pre-workout.

However, just make sure that you consume under 200mg Caffeine dosages – this will ensure that you avoid side effects such as a jittery feeling and energy crashes.

But here’s the problem; Caffeine is part of a proprietary blend (meaning no-one knows whether there’s a dosage under 200mg or not).

To keep you safe, we have to assume that there’s more than 200mg Caffeine per serving in Psychotic Pre-Workout (a company that has the theme of a ‘mental asylum’ will have loaded this product with Caffeine to make it seem more ‘powerful’.

However, there’s no point in taking a pre-workout with over 200mg Caffeine per serving; over this amount will give you a sharp energy boost, before leaving you exhausted and cutting your gym session short.

This is clearly another reason why we don’t like proprietary blends.

You can see why we’re confused why Insane Labz has added this into their Psychotic Pre-Workout…The only reason we could think of is that Insane Labz believes Juniper Berry improves the absorption rate of supplements (like what black pepper extract does).

However, no study has shown that this ingredient offers benefits to improve your workout – making it an ineffective ingredient.

The problem is this; as Juniper Berry is part of a proprietary blend, it might be filling most of this blend without you knowing – this would lead to Psychotic Labs being mostly ineffective.

By now, you must be able to see why proprietary blends are a bad thing for the industry.

Hordenine is a compound that’s believed to promote fat loss.

But there are 2 problems here; fat loss isn’t a key reason why you’d buy a pre-workout (that’s what fat burners are made for), and Hordenine hasn’t proven to work in any study – making it an ineffective ingredient.

Again, if it’s filling most of Psychotic Pre-Workout’s proprietary blend, this would mean most of the whole product is ineffective…

Also known as DMAE, this is on our list of ingredients to avoid.

It’s believed to reduce cognitive decline associated with old age, but it’s been reported to cause a very worrying side effect; DMAE is known for causing birth defects in unborn infants.

For this reason, we strongly recommend you to avoid this ingredient – especially if you’re interested in having a child.

Not only that, DMAE hasn’t actually proven to deliver any benefits in any studies (meaning it’s also unreliable too).

Otherwise known as ‘the poison devil’s pepper’; it’s believed to reduce pain and be used as a sedative – but these aren’t even benefits that’ll improve your workout…

For this reason, Rauwolfia is an ineffective ingredient in Psychotic Pre-Workout. But that’s not all; Rauwolfia has shown to cause numerous side effects (we’ll expand on this in the side effects section).

The problem is, if there’s a large dosage of Rauwolfia in this pre-workout, then your risk from suffering side effects would be increased. The point is, no-one knows the exact dosage inside Psychotic as it’s inside a proprietary blend.

This isn’t a good ingredient to finish on; Huperzine A is believed to improve your cognition – but Caffeine offers enough boost in focus to benefit your gym session.

Ultimately, this means Huperzine A isn’t needed in this pre-workout as it’s more useful in a nootropic supplement.

Not only that, Huperzine A has been reported to cause numerous side effects (which we’ll expand on in the next section). 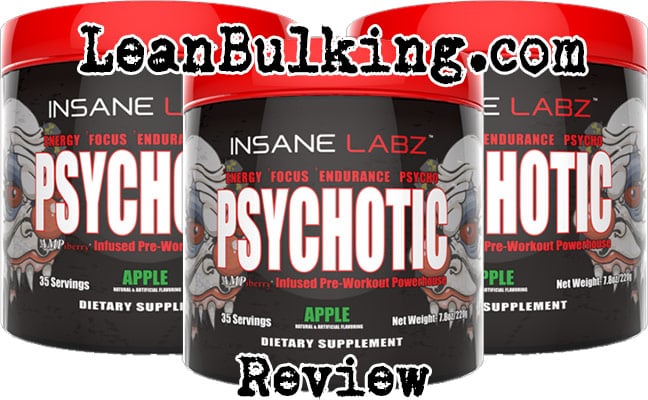 Out of the 9 ingredients inside Psychotic Pre-Workout, 5 of them can cause side effects – this isn’t a good thing.

Simply put; Beta-Alanine can cause paresthesia (a tingling and itching sensation on your face and body). Caffeine is in a proprietary blend, so it might be in a dosage over 200mg per serving (which would cause jitters and energy crashes).

Not only that, DMAE can cause birth defects, while Huperzine A can cause numerous side effects such as nausea.

Here are the potential side effects from taking Psychotic Pre-Workout:

As you can see from the potential list of side effects, we can’t recommend anyone to try Psychotic Pre-Workout by Insane Labz.

Also, if you read our ingredients section, you should know exactly why we believe proprietary blends are one of the worst things in the supplements industry; they allow companies to hide ineffective dosages, while potentially filling their products with cheaper, ineffective ingredients.

For this reason, you should only be considering pre-workouts that don’t contain any proprietary blends – and also contain tried-and-tested ingredients that have been dosed optimally. Ultimately, these things will ensure you get the best value for your money.

A few things really let Psychotic pre-workout down, such as the inclusion proprietary blend inside. Not only that, Psychotic also contains some potentially harmful nutrients such as DMAE.

All of this factors into our decision; we don’t believe that it can compete with the highest rated pre-workouts available right now.