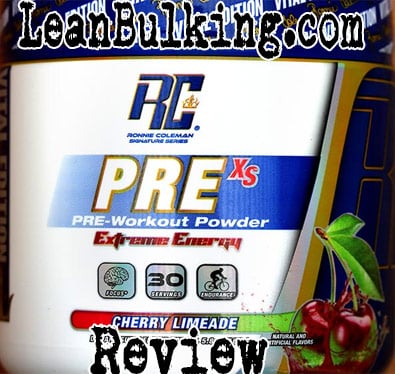 PRE XS is a pre-workout supplement by Ronnie Coleman Signature Series. It comes in 30 serving containers and comes in 1 flavor – Cherry Limeade.

We all love Ronnie Coleman – the 8x Mr. Olympia legend. So we’ll take you through each ingredient and explain exactly why we’ve given it our rating in the next section – this will help you understand how to look for the best pre-workouts on the market too.

But first, we’ll tell you about the company behind this pre-workout – for those that don’t know.

Who are Ronnie Coleman Signature Series?

As we’ve mentioned, the main man behind this sports nutrition brand doesn’t need any introduction. He’s cemented his place as one of the greatest bodybuilders in the sport – so we were hoping that this success would have a smooth transition to his supplements business.

And to an extent, we were right. His brand has become popular, so we were excited to see this pre-workout, which was released in 2017.

Without wasting any more time – we’ll get to the main event below.

Ronnie Coleman PRE XS contains 7 ingredients overall, which is a good number. We also like that this pre-workout doesn’t contain any proprietary blends – meaning you can see the exact dosages of each ingredient inside.

This allows us to accurately analyze Ronnie Coleman PRE XS’s ingredient list. From first glance, we’re not impressed with the dosage of Citrulline Malate – considering it’s optimal dosage is 6,000mg, the 1,000mg is a tiny amount here.

Anyway, we’ll expand more on this, and examine all the ingredinets inside for you – so you can see how effective Ronnie Coleman PRE XS really is. 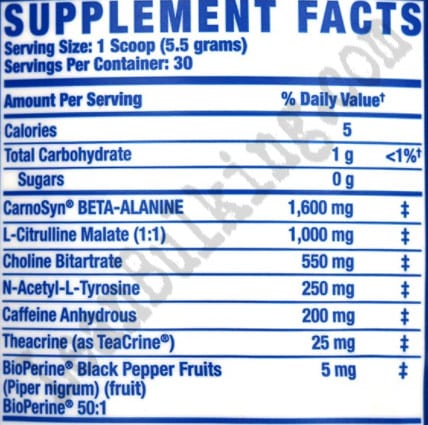 Most people have mixed opinions on this ingredient; basically, Beta-Alanine has shown to enhance your muscular endurance, but also causes a side effect called paresthesia.

What’s paresthesia? Well, it’s a tingling and itching sensation on the skin of your face and body. If you’ve ever experienced ‘pins-and-needles’ before, then it’s very similar to that…but more itchy.

Personally, we hate this side effect – we suffered from it before, and we couldn’t focus on our gym session properly due to itching everywhere.

If you don’t want to look like you have fleas, then we recommend avoiding this ingredient…but we’re not slating it. As we’ve mentioned, it’s shown to work – it just causes a side effect too.

We’d rather have Creatine Monohydrate here instead; this has been used since the 1980’s and is proven to boost your strength and endurance (without causing any unwanted side effects).

This is one of the best ingredients you can find in pre-workout supplements. Simply put, it’s proven to enhance your muscle pumps in dosages of 6,00mg per serving.

As we mentioned before, Ronnie Coleman PRE XS only contains 1,000mg Citrulline Malate – meaning it’s not likely to work. This is why dosing ingredients correctly is important.

But we still give Ronnie Coleman credit for not hiding any ingredients in proprietary blends. For this reason, we’re willing to pass this as a genuine mistake – and if anyone reads this, then increasing the dosage to 6,000mg would increase the rating on our review.

We’re really big fans of Ronnie Coleman, so it hurts criticizing his product. But this is how honest LeanBulking is – we can’t recommend anything apart from the best to our readers.

From one of the best ingredients, to one of the worst; Choline is something that’s useless in pre-workout supplements.

Here’s why: it’s not shown to offer any benefits to improve your gym session in any studies, but has been reported to cause a strange side effect – Choline causes your breath and sweat to smell fishy.

For this reason, we don’t agree with adding Choline into pre-workout supplements. L-Carnitine would’ve been much better instead (as L-Carnitine has proven to reduce fatigue while boosting your focus. But unfortunately it’s not inside Ronnie Coleman PRE XS).

This is a ‘brain-booster’ ingredient that’s shown to improve your cognition. However, as Ronnie Coleman PRE XS also contains Caffeine (which boosts your focus in the gym), L-Tyrosine isn’t needed here.

However, we believe L-Tyrosine is a key ingredient in Nootropic Supplements.

As we just mentioned, Caffeine offers enhanced focus in the gym. But that’s not all; Caffeine has also proven to boost your strength, endurance and energy levels too – which are all key benefits of taking pre-workout supplements.

For this reason, Caffeine is a key ingredient when dosed correctly (under 200mg per serving). Ronnie Coleman PRE XS contains exactly 200mg Caffeine per serving, so you should avoid jitters and energy crashes if you’re tolerant to this stimulant – basically, if you drink 3-5 cups of coffee daily, then you’ll be fine.

But this was a mistake. Theacrine is another stimulant that’s believed to deliver the same benefits as Caffeine.

As we just mentioned, Ronnie Coleman PRE XS contains an optimal amount of Caffeine, so it didn’t need Theacrine added into the mix here. Ultimately, this only increases your risk of suffering from jitters and energy crashes – which would ruin your gym session.

For this reason, we only recommend pre-workouts that contain 1 stimulant, with the best and safest stimulant being Caffeine (under 200mg per serving).

Yes, this is indeed the same stuff you sprinkle on-top of your food.

But it’s actually more useful than simply helping your food taste better; Black Pepper Extract has shown to improve the absorption rate of a supplement – making it slightly more effective.

However, it’s not a miracle ingredient (meaning it won’t make an average product great). So Black Pepper Extract is a ‘bonus’ ingredient, rather than a key one.

There’s 3 things that can cause side effects in Ronnie Coleman PRE XS; Beta-Alanine, Choline and because it contains 2 sources of stimulants.

To give you a quick overview – Beta-Alanine causes paresthesia (which we’ll expand on below), Choline causes your breath and sweat to smell fishy, and having 2 stimualnts in 2 pre-workout increases your risk of suffering from jitters and energy crashes. Phew, that was a long sentence…ain’t nothin but a peanut though.

What’s paresthesia? Well, it’s a tingling and itching sensation on the skin of your face and body – we don’t like this side effect, as we look like we have fleas in the gym…not good when you’re trying to make gains.

Here’s the potential side effects from taking Ronnie Coleman XS:

We’re sad to give this a 1.5 star rating; we’re really big fans of Ronnie Coleman, but unfortunately the nutrient profile of this pre-workout is nowhere near as good as his legacy.

Ultimately, this product isn’t as effective as the best pre-workouts on the market in our honest opinion.

We believe that there are better options out there, but Ronnie Coleman still remains one of the greatest bodybuilders in the history of the sport.