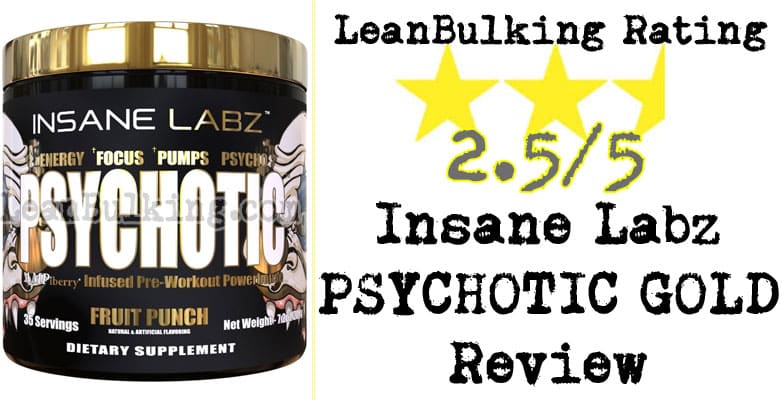 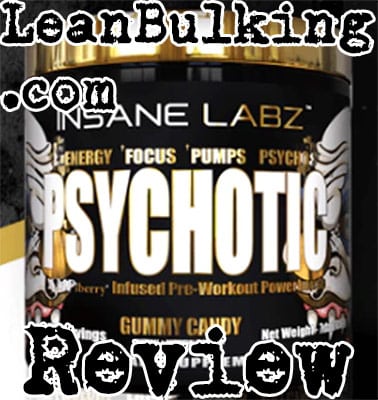 Psychotic Gold is a pre-workout supplement made by Insane Labz, newly released for 2018. It costs $59.95 in a deal including things like a protein shaker, which doesn’t seem like a bad deal.

It also comes in Gummy Candy flavor, which sounds pretty tasty too. So we’re looking forward to seeing whether the ingredients in Psychotic Gold can prove how safe and effective this pre-workout is.

To do this, we’ll analyze Psychotic Gold’s nutrient profile in the next section. But first, we’ll tell you more about the company behind it.

Insane Labz are a USA-based supplements company that sell a wide variety of products, from testosterone boosters to their highly rated pre-workouts.

In fact, Psychotic Gold seems to be the sequel to their previous Psychotic pre-workout. So we’re expecting this to be a new and improved formula.

There isn’t much more information available on their website, and we’re not 100% sure what year this company was founded. So let’s stop wasting time and see which ingredients Insane Labz have added to Psychotic Gold below…

From first glance, we’re happy to see that Insane Labz have added some beneficial ingredients. Especially Citrulline Malate which is one of our favorite pre-workout ingredients.

However, you can’t ignore that every ingredient in Psychotic Gold is part of a proprietary blend (we’ll expand on this below).

Proprietary blends are mixtures of numerous ingredients that’re only shown to you as 1 quantity. As you can see from the ‘Psychotic GOLD Blend’ on its ingredients list, the overall amount is 4,234mg – but you’re not shown the dosages of each ingredient inside such as Caffeine Anhydrous.

Anyway, in our honest opinion, companies should stop using proprietary blends. But in fairness, the overall dosage of Psychotic Gold’s blend might allow for some ingredients to be optimally dosed in this pre-workout.

We’ll take you through each ingredient in Psychotic Gold in this section. By the end of this review, you’ll have a good idea of how safe and effective this pre-workout really is. 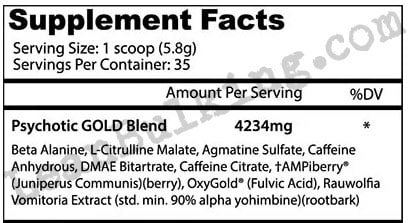 We always have mixed opinions about Beta-Alanine; it’s can improve your muscular endurance, but it can also cause a side effect called parethesia (itchy & tingly skin).

Now, we personally don’t like this side effect, as it distracts us when we’re trying to focus on making gains. But we do acknowledge that this is our honest opinion, and not everyone is as badly affected.

Ultimately, you can’t ignore that Beta-Alanine can be beneficial too. So we’ll leave this up to personal preference, whether Beta-Alanine is good addition in Psychotic Gold.

Citrulline Malate is one of our favorite ingredients you can find in pre-workout supplements; it’s proven to raise your nitric oxide levels, which leads to you experiencing enhanced muscle pumps while lifting weights.

But the problem is that Citrulline Malate’s optimal dosage has shown to be 6,000mg per serving in clinical studies.

As the whole ‘Psychotic Gold Proprietary Blend’ only adds-up-to 4,234mg, it’s impossible for there to be an optimal dosage of Citrulline Malate in this pre-workout.

Simply put, this emphasizes why it’s so important for companies to not only add the right ingredients to their products. But also dose them optimally too – to provide the customer with the best value for money and results.

Not much is actually known about Agmatine Sulfate, as there hasn’t been enough studies to provide solid evidence yet.

However, we know that Agmatine is extracted from L-Arginine, so it’s believed to improve your nitric oxide levels.

The bad news is that L-Arginine has a poor absorption rate; this means that Agmatine Sulfate might also not be utilized by your body as well as it could be.

For this reason, we would have preferred to see a key pre-workout ingredient such as Creatine Monohydrate in Psychotic Gold instead.

Caffeine Anhydrous is the best stimulant you can find in pre-workout supplements. In case you don’t know, ‘Anhydrous’ simply means that Caffeine has been dehydrated into powder form so it can be added into supplements.

It’s proven to be safe and effective, and you’ll know this if you consume tea or coffee.

But as you’ll also know, Caffeine can cause jittery side effects when consumed in large dosages.

Now, the problem is that you’re not shown the exact dosage of Caffeine Anhydrous in Psychotic Gold; this increases your risk of jitters and energy crashes, especially if you’re sensitive to this stimulant and have a low tolerance.

As a result, we advise you to choose a pre-workout that doesn’t contain stimulants in proprietary blends – to stay safe.

Also, to ensure you avoid side effects, we recommend consuming under 200mg Caffeine Anhydrous per serving. This should keep everyone safe from jittery side effects, regardless of tolerance to Caffeine.

DMAE is known for being able to improve your cognition. While an increase in focus is beneficial for your gym session, Caffeine Anhydrous has this covered.

For this reason, we don’t believe DMAE is necessary in pre-workout supplements such as Psychotic Gold.

Not only that, DMAE has shown to be potentially teratogenic, meaning it might cause defects to unborn babies. This is something that needs to be avoided at all costs.

This is basically a mixture of Caffeine and Citric Acid. The worrying thing is that it’s another form of Caffeine, which increases your risk of causing jittery side effects.

We always advise you to choose pre-workouts only containing 1 source of stimulant to avoid risks of side effects and stay safe. It’s made even worse due to Caffeine Citrate being part of a proprietary blend.

You might have seen this in your gin & tonic alcoholic beverage before. It’s used in cooking too, due to posessing a unique flavor.

So now you know that pointless bit of information, we’ll tell you whether it’s useful in Psychotic Gold; while it contains high amounts of antioxidants, it’s not going to have much effect on your gym session.

Ultimately, we would have much preferred to see a key pre-workout nutrient such as Creatine Monohydrate instead.

With a name like Rauwolfia Vomitoria Extract, this doesn’t sound very appetising, does it? Well, it’s also been reported to cause numerous side effects too.

Ultimately, there’s no need consume ingredients that can potentially cause side effects. Especially when there are safe and effective nutrients available. 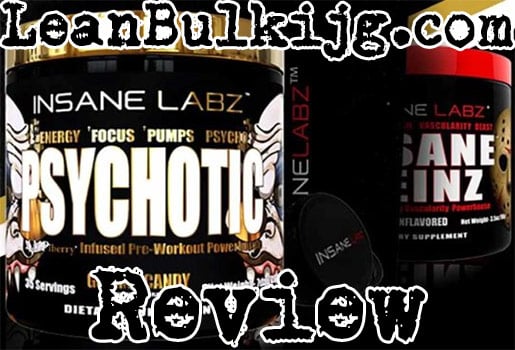 Due to every ingredient being part of a proprietary blend, there’s always the increased risk of side effects as you don’t know the exact dosages of nutrients inside.

This risk is increased due to Psychotic Gold containing numerous stimulants; it’s always better to know the exact amount of Caffeine you consume, to ensure you stay under your limit and avoid jittery side effects.

Here’s the potential side effects from taking Psychotic Gold:

We might sound like we’ve been extremely critical of Psychotic Gold, but we always give our honest opinion in supplement reviews.

In all fairness, Insane Labz are a respected company who have built a great reputation for themselves for their pre-workouts. But Psychotic Gold isn’t their best creation.

Saying that, there are many positives about Psychotic Gold too; it contains some great nutrients that have shown to improve your gym session, such as Beta-Alanine and Citrulline Malate.

Psychotic Gold is a respectable product supplement, containing some great ingredients. But as every ingredient is included in a proprietary blend, due to being in unknown amounts, we don’t believe it can compete with the highest rated pre-workouts on the market.