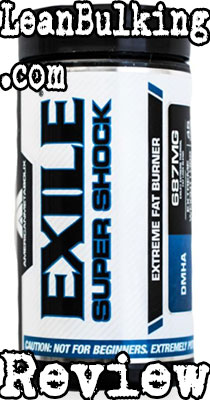 Exile Super Shock is marketed as an ‘Extreme Thermogenic Fat Burner’ made by American Metabolix Sports Nutrition. New for 2018, it costs $39.99 for 30 serving containers, with a serving size of 1 capsule per day; this isn’t great, as clinical studies show that 3-4 capsule servings spread through out the day keeps your body fuelled for longer.

From first impression, we have to give our honest opinion and say that we’re not massively impressed; Exile Super Shock is missing key fat burning nutrient such as Green Tea Extract, which we believe to be essential additions.

But there are positives, such as the reasonable price American Metabolix Sports Nutrition have set for this fat burner supplement.

Anyway, we’ll explain this and more as we analyze Exile Super Shock’s nutrient profile in the next section. But first, we’ll tell you more about the company behind it.

Who are American Metabolix Sports Nutrition?

We actually liked this company’s ‘about us’ page. It wasn’t too long, but delivered all of the information we look out for.

American Metabolix Sports Nutrition was founded in 2012 by the original founders of Cellucor. So it’s safe to say that these guys know what they’re doing.

We assume that their supplements are created under cGMP & FDA regulations, although this wasn’t outlined on their website. But you’re here to learn more about Exile Super Shock, so let’s see which ingredients have been added in the section below…

Exile Super Shock contains 7 ingredients overall, which is a great number to have in a fat burner; we’ve noticed that products containing over 10 nutrients are often under-dosed, so we prefer less ingredients that have been dosed better.

But one problem that we personally have with Exile Super Shock, is that every ingredient is part of a proprietary blend (we’ll expand on this below).

Proprietary blends are mixtures of numerous ingredients that’re only shown to you as 1 quantity. As you can see from the ‘Exile Extreme Thermal Fat Loss Blend’ on Exile Super Shock’s ingredients list, the overall amount is 612mg – but you’re not shown the dosages of each ingredient inside such as Rauwolfia Vomitoria Extract.

Now, in all fairness, American Metabolix Sports Nutrition have provided the exact dosages of Caffeine Anhydrous and DiCaffeine Malate; we respect this, as it allows customers to see whether their personal tolerance level would be okay with the overall amount in Exile Super Shock.

We’ll expand on this as we take you through each ingredient in Exile Super Shock in this section. By the end of this review, you’ll have a good idea of how safe and effective this fat burner supplement really is.

Caffeine Anhydrous is the best stimulant you can find in any supplement. This is because it’s proven to be safe and effective at raising your energy levels – just ask any coffee lover!

So you know that it’s able to boost your energy. But you might also know that consuming too much can lead to jittery side effects in the future.

So how much is ‘too much’? We consider over 100mg per capsule to be more than necessary for the needs of a fat burner; after all, you don’t want to be too highly dosed up while at your office desk!

Now, in our honest opinion, one issue with Exile Super Shock is that it contains 300mg Caffeine Anhydrous in one serving. Just to put this into perspective, this is more than most pre-workout supplements contain, and they’re created to get you PUMPED UP for your workout.

So our advice would be to make sure you only consume this fat burner before your workout. But then again, we don’t think it can compete with the highest rated pre-workouts on the market for this job.

Also, if you’re tolerance to Caffeine is very low, then we suggest looking for another fat burner containing less (under 100mg per capsule serving) – to stay safe from jittery side effects.

Not much is known about this ingredient, but it’s believed to elevate your mood by positively affecting your serotonin and dopamine levels.

American Metabolix Sports Nutrition have probably added this to try and help you feel happier while consuming those salads to lose fat…only kidding, you really don’t need to be only consuming salads to lose body fat.

In our honest opinion, we don’t consider Phenylethylamine to be a necessary addition to Exile Super Shock or any other fat burner. We would have preferred something tried-and-tested to promote fat loss, such as Green Tea Extract.

In case you were wondering, this is another form of Caffeine (more specifically, Caffeine bound with Malic Acid).

So what does the added Malic Acid do? Well, some believe that it’s able to soften the effects Caffeine has on some people’s digestive systems. But we believe that Malic Acid is more useful at raising your ATP levels (in a similar way to caffeine) in higher dosages.

Now, as there’s only 50mg DiCaffeine Malate in Exile Super Shock, it’s not going to be able to raise your ATP levels.

In fact, the addition of DiCaffeine Malate here is actually a bad thing in our honest opinion; added to the already high dosage of Caffeine Anhydrous in Exile Super Shock, it’s going to increase your risk of jittery side effects.

For this reason, we advise looking for fat burners containing only 1 source of stimulant instead.

Higenamine is another lesser known ingredient in the supplements industry. While it’s being added to increasing amounts of supplements, not much is known about it as there haven’t been enough studies conducted.

So what is it supposed to do? Well, Higenamine is believed to be a fat burning nutrient that works in a similar way to Synephrine or Ephedrine. But remember that Ephedrine has been banned due to causing harmful side effects…

After looking at WebMD, we can also see that Higenamine is also linked with worrying side effects. So we personally try to avoid this ingredient when looking for fat burners on the market.

There’s simply no need to take risks on your health, especially when there are safe and effective fat burners available.

Again, Hordenine is another ingredient that hasn’t been as tried-and-tested as other ingredients such as Green Tea Extract or Cayenne Pepper Extract.

Not only that, Hordenine has also shown to cause a false positive for morphine in drug tests. So it’s probably something you want to avoid if you’re a professional athlete.

When it comes to fat burning nutrient, Garcinia Cambogia Fruit Extract is something we try to avoid.

Why? Because studies have shown that it’s not actually able to promote fat loss.

The problem is that Garcinia Cambogia Fruit Extract gained publicity in the media (much like raspberry ketones). So many people still mistakenly believe it’s effective at boosting your metabolism.

Not only that, some other fitness experts believe that Garcinia Cambogia Extract can cause side effects such as headaches and nausea.

Rauwolfia Vomitoria Extract is another stimulant. It’s believed to promote fat loss by boosting your metabolism, and in fairness, there have been studies showing that it’s effective.

However, there’s also been studies showing that Rauwolfia Vomitoria Extract can cause side effects such as nausea and high blood pressure. For this reason, we prefer safer nutrients such as Green Tea Extract when trying to lose body fat. 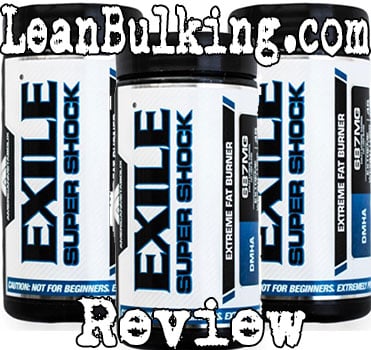 In our honest opinion, there are a few factors that can cause side effects in Exile Super Shock; these include the high dosage of Caffeine, Higenamine and Rauwolfia Vomitoria Extarct.

Also, in case you skimmed past the last section, Hordenine can cause false positives in drug tests for morphine. So it’s probably something you should avoid if you’re a competitive athlete.

Here’s the potential side effects when taking Exile Super Shock:

We probably seem like we’ve been overly critical of this fat burner in our review. But remember that we always provide our honest opinion without wasting your time.

Overall, Exile Super Shock isn’t the worst product we’ve seen on the market; you can see that American Metabolix Sports Nutrition clearly did their research, finding lesser researched ingredients for their fat burner.

However, they’ve made Exile Super Shock inaccessible for those with a low tolerance to caffeine and stimulants.

Due to the more-than-necessary caffeine dosage in Exile Super Shock, you might be at risk from jittery side effects if you’re sensitive to stimulants.

For this reason, we don’t think Exile Super Shock can compete with the best fat burners on the market.