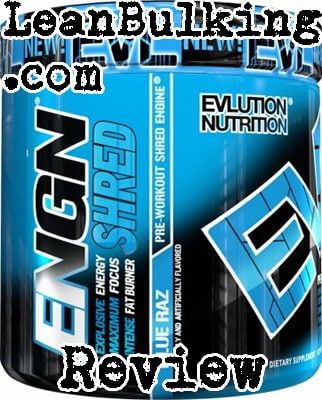 ENGN Shred is a pre-workout/fat burner hybrid made by EVLution Nutrition. It costs $34.99 on bodybuilding.com for 30 serving containers, and comes in 4 flavors – Blue Raz, Cherry Limeade, Fruit Punch, Furious Grape and Green Apple.

This sounds like a tasty product, but we never like these ‘hybrid’ supplements; basically, if you’re looking to lose fat, then just choose a premium fat burner – there’s no need to include fat burner ingredients in a pre-workout supplement.

Why? Because you need to consume fat burning ingredients more frequently than just once per day; as you only take pre-workout supplements once before your workout, the nutrients believed to promote fat loss won’t even be effective.

Anyway, we’ll tell you more about the company behind ENGN Shred, before analyzing it’s nutrient profile for you.

Who Are EVLution Nutrition?

EVLution Nutrition have become a popular sports nutrition brand, and have released some best selling products – such as EVLTest, which is a testosterone booster supplement.

However, we didn’t learn much about them on their ‘about us’ section of their website; it only stated their mission statement and goal, which we’re not too bothered about.

Ultimately, you’re here to learn more about ENGN Shred, and whether it’s worth trying out. So we’ll reveal everything in the next section below…

Proprietary blends are mixtures of numerous ingredients that’re only shown to you as 1 quantity. As you can see from the ‘ENGN Energizers’ blend in this fat burner’s ingredient list, the overall amount is 260mg – but you’re not shown the dosages of each ingredient inside such as Caffeine.

Anyway, now you know why proprietary blends are a bad thing, we’ll take you through each ingredient inside ENGN Shred – so you can see how effective it really is. 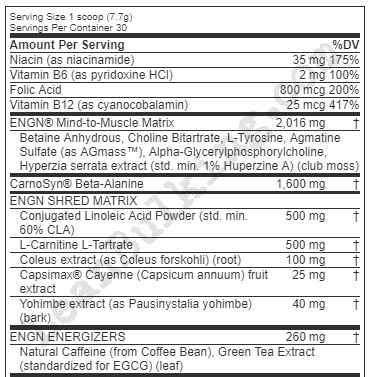 This is the first ingredient on ENGN Shred’s nutrient profile, and it’s just bad news for EVLution Nutrition straight away; studies have shown that Betaine is useless but causes your breath and sweat to smell fishy.

But the worst part is that EVLution Nutrition has added Betaine into their ‘ENGN Mind-to-Muscle Matrix’ proprietary blend – so Betaine might be filling the whole blend, increasing your risk of side effects and of this pre-workout not working.

Right, so we just mentioned that Betaine was useless and caused your breath and sweat to smell fishy. Well, Choline has this exact same problem – so we hope that you don’t mind smelling like a salmon after taking ENGN Shred – at least take a lemony scent around with you, to compliment the smell…

Also, this is part of the same proprietary blends. You know the rest.

L-Tyrosine is a key ingredient when added to a nootropic supplement. However, it’s not as effective in a pre-workout (or a fat burner), as it’s only benefit is improving your focus in the gym.

The good news is that L-Tyrosine hasn’t shown to cause any side effects, so there’s not a big issue with it being inside the proprietary blend.

If you’re wondering what this is, Agmatine Sulfate is basically extracted from L-Arginine; this is a bad thing, as L-Arginine has a poor absorption rate and is mostly ineffective when orally supplemented.

For this reason, Agmatine Sulfate has shown to have a poor absorption rate in numerous studies too.

Not only that, the main benefit of this ingredient is that it’s able to reduce pain and help treat drug addiction. These are clearly not benefits that’ll improve your gym session, so we consider this to be an unnecessary nutrient in ENGN Shred.

Also known simply as Alpha-GPC, this is the worst ingredient inside the ‘ENGN Mind-to-Muscle Matrix’ blend, as it’s been reported to cause numerous side effects (we’ll expand on this in the side effects section later in this review).

But more bad news, is that Alpha-GPC is also more suited to Nootropic supplements, as it’s simply a ‘brain booster’ that offers no other benefits to improve your gym session.

As it’s inside a proprietary blend, you don’t know the exact dosage inside; this means there could be a HUGE amount inside, increasing your risk of side effects. The point is, you’ll never know until it’s too late.

We just stated that Alpha-GPC was the worst ingredient in ENGN Shred’s first proprietary blend. However, this was before we saw Huperzine A on the list.

Basically, this is another ‘brain booster’ that’s believed to improve your cognition. But it’s been reported to cause numerous side effects, which is why we try to stay away from supplements containing it.

Ultimately, ENGN Shred contains Caffeine, which has shown to improve your focus in the gym – so there’s no need for other nutrients that only offer an increase in your cognition.

Are you going to take a pre-workout before an college exam? No, you’re taking a pre-workout to get you pumped and improve your gym session enough to make changes to your physique. For this reason, nutrients such as Huperzine A aren’t needed in ENGN Shred.

Also known as CLA, this is a fatty acid that’s believed to promote fat loss. But recent studies have shown CLA doesn’t deliver this benefit.

Ultimately, it’s not as effective as key fat burning ingredients such as Green Tea Extract, and it’s not even needed in a pre-workout supplement either (as it won’t really improve your workout either).

L-Carnitine is one of the only key pre-workout ingredients inside ENGN Shred; it’s shown to reduce fatigue and muscle damage, while improving your focus in the gym.

Ultimately, this nutrient will help you train harder for longer, and it’s been dosed well in ENGN Shred. Good job here, and we’re relieved to finally see something good in this pre-workout.

We’re keeping an eye on this ingredient, as it sound promising. But at the moment, there isn’t enough evidence to prove that it works (making it unreliable).

What is it believed to do? Well, it’s suggested that Coleus Forskohlii can promote fat loss while improving your testosterone levels (which would make it the ultimate addition to any fat burner or testosterone booster supplement).

But don’t forget that there’s no need for a pre-workout to directly promote fat loss or boost your testosterone anyway – so Coleus Forskohlii wouldn’t be needed here, even if it was proven to work.

We’ve decided to group these 2 ingredients together to save time. Basically, they’re both key fat burning ingredients, making them the perfect addition to any fat burner supplement.

However, they’re not needed in pre-workout supplements, as the main benefit from taking pre-workouts is to simply improve your performance in the gym (which Cayenne Pepper and Green Tea Extract won’t do).

Right, this is the worst ingredient in the whole of ENGN Shred’s ingredient list; it’s been reported to cause numerous harmful side effects, and we won’t be surprised if it get banned by the FDA and in the UK soon.

But the worst part is that Yohimbe is another nutrient shown to promote fat loss – meaning it’s not needed in ENGN Shred anyway.

As we mentioned, if your main goal is to lose body fat and get a six pack, then an effective fat burner will be much more useful for you. There’s simply no need for these ‘hybrid’ supplements (which is why none have become really popular).

In case you’re wondering what ‘anhydrous’ means; this is basically dehydrated Caffeine in powder form, so it can be added into capsules.

But there’s a problem; Caffeine Anhydrous is part of a proprietary blend, so no-one knows the exact dosage of Caffeine inside ENGN Shred.

The overall amount of this blend is 260mg, so there’s a chance that there’s over 200mg Caffeine in this pre-workout supplement. Ultimately, we always advise you to consume under 200mg Caffeine per serving – to stay safe from side effects such as jitters and energy crashes (you can always consume more caffeine, but once you’ve had too much at once, you’ll feel like sh*t).

For this reason, if there’s 1 ingredient that EVLution Nutrition should have left out of a proprietary blend, then it should’ve been Caffeine. 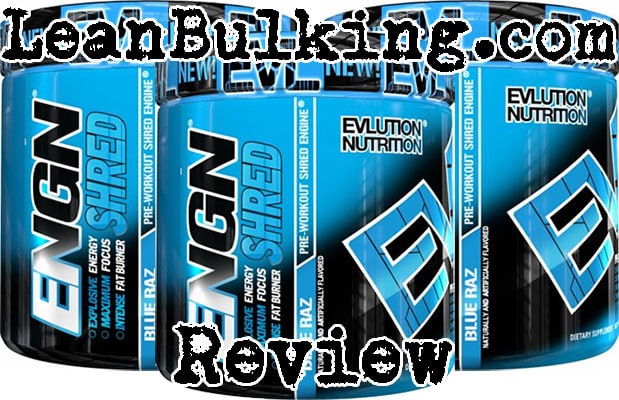 There are 5 things in ENGN Shred that can cause side effects; Betaine, Choline, Huperzine A, Yohimbe and Caffeine (as this stimulant is part of a proprietary blend).

Simply put, Betaine and Choline have both shown to cause your breath and sweat to smell fishy like a salmon, Huperzine A & Yohimbe can cause numerous harmful side effects that we’ll list below, and Caffeine can cause jittery feelings when consumed in dosages over 200mg per serving.

Here’s the potential side effects from taking ENGN Shred:

As you can see from the list of potential side effects above, we chose to stay away from ENGN Shred. It’s simply not worth risking suffering from side effects – especially when there are effective pre-workouts and fat burners that won’t cause any side effects.

Not only that, we don’t think ‘hybrid’ pre-workout/fat burner supplements will ever work; you need to consume fat burning nutrients in 3-4 servings spread throughout the day for them to work. And the main benefit of taking a pre-workout is to improve your gym sessions to make changes to your body (whether it’s losing fat or packing on muscle) – not directly promoting fat loss, this is what fat burner supplements are made for.

ENGN Shred is more likely to cause side effects than improve your performance in the gym or help you lose fat.

We advise you to either choose a highly rated pre-workout or fat burner supplement – instead of trying out these ‘hybrid’ products that won’t deliver any benefits.