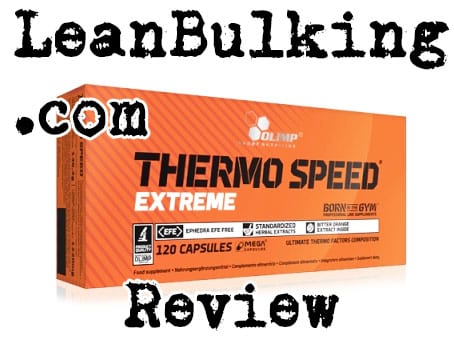 Thermo Speed Extreme is a fat burner supplement made by Olimp Sport Nutrition. It costs 24.99 EUROS ($29.50) for 120 capsules, which seems like a very good price.

However, we noticed that the daily serving size for Thermo Speed Extreme was 2 capsules per day; this isn’t great, as studies have shown 3-4 capsules is the best for keeping your body fuelled with fat burning nutrients needed to burn as much fat as possible.

Anyway, we’ll tell you about Olimp Sport Nutrition, before analyzing the nutrient profile of this fat burner.

Who are Olimp Sport Nutrition?

Olimp Sport Nutrition are one of the biggest supplement companies in europe, but they haven’t really tried to market themselves outside, such as in the USA (or even the UK).

They released their first creatine product in 1995, so they’ve been around for a while – making it even more confusing why they haven’t really bothered to make an impact in the UK or USA until quite recently.

Apart from creatine, Olimp Sport Nutrition market a wide variety of supplements – from test boosters, to this fat burner here. We also found that this company sponsors some high-level athletes, such as Joanna Jedrezejczyk (a female UFC fighter) and bodybuilders such as Dragos Syko.

Thermo Speed Extreme first caught our attention after we saw its fiery orange/red/yellow packaging. And we were glad to see that Olimp Sport Nutrition hadn’t added any proprietary blends (so you can see the dosages of each ingredient inside this fat burner, without any being hidden in blends like many other products).

But for a product that’s presented in such fiery packing, we were expecting there to be more effective thermogenic ingredients; we were especially surprised that Thermo Speed Extreme didn’t contain Cayenne Pepper Powder (which has proven to boost your metabolism and promote fat loss in numerous studies).

Anyway, we’ll explain everything in detail as we take you through each ingredient inside Thermo Speed Extreme – so you can see how effective this fat burner really is. 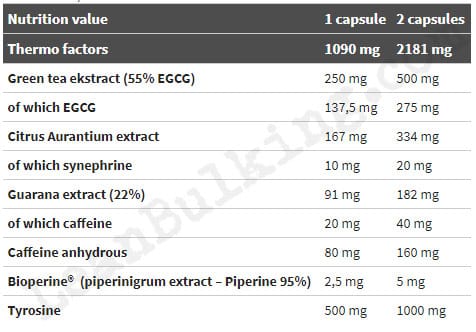 The first ingredient on the supplements facts of Thermo Speed Nutrition, and a great choice by Olimp Sport Nutrition.

Why? Because Green Tea Extract has shown to benefit almost every organ in your body, as well as being very effective at helping you lose body fat.

In fact, East Asia has known about the benefits of Green Tea for decades, and it’s only recently that the west has realized how beneficial this plant is.

How does it work? Well, Green Tea Extract contains high amounts of catechins (which is a thermogenic proven to boost your metabolism, therefore promoting fat loss).

It’s been dosed well in Thermo Speed Extreme, but we wish that it was spread out in 3-4 capsules instead of just 2 (as we mentioned before, 3-4 capsules has shown to be the most effective serving size in studies).

Also known as Synephrine and Bitter Orange Peel, this ingredient has shown to promote fat loss. So it works, but it comes with some big risks…

Simply put, Citrus Aurantium has been reported to cause numerous side effects when orally supplemented. In fact, it’s been banned in countries such as the UK and Canada for this reason.

While it might help you lose fat, there are much better and safer options available (such as Cayenne Pepper Powder, which is tried-and-tested to work). For this reason, we advise you to avoid supplements containing Citrus Aurantium, and we’ll explain the side effects it can cause in the side effects section later in this review.

Right, so the seeds of this fruit are used as a source of stimulant; it’s believed to offer similar benefits to Caffeine, but companies find it hard to regulate the exact caffeine dosage in Guarana.

This is a problem, as consuming large dosages of caffeine can cause side effects such as jitters and energy crashes. It’s even more of a problem when you realize that Olimp Sport Nutrition has added 2 sources of stimulants in Thermo Speed Extreme – increasing your risk of side effects further.

For this reason, we always advise that you choose supplements containing only 1 stimulant (preferably Caffeine Anhydrous, which has proven itself to be the safest and most effective stimulant for decades).

We just mentioned that this is your best option when it comes to stimulants in supplements. This is because Caffeine Anhydrous is literally dehydrated Caffeine – so you know the exact dosage added into supplements.

Ultimately, knowing the exact dosage added to products can keep you safe from suffering from jitters and energy crashes. As a general rule, we recommend only consuming fat burners that contain under 100mg Caffeine per capsule.

So why is Caffeine useful in fat burners? Well, this stimulant can help keep your energy levels high while you cut calories (and potentially carbs) from your diet. We love it, and judging by the popularity of Starbucks and other coffee shops, we’re guessing you do too.

But here’s the bad news; Thermo Speed Extreme contains 2 sources of stimulants, which increases your risk of jitters and energy crashes.

Depending on your tolerance, you might be alright. But as we mentioned, we advise you to consume fat burners only containing Caffeine Anhydrous as it’s source of stimulant.

You might be wondering what this is. But it’s simply the same stuff you sprinkle on top of your food to enhance its taste – Black Pepper Extract.

So why has Olimp Sport Nutrition added Black Pepper Extract? Well, it’s not to make it taste better…basically, this ingredient has proven to improve your digestion and your body’s ability to absorb supplements that it’s added to.

If you’ve seen Hell’s Kitchen, then you’ll know that Gordon Ramsay loves Black Pepper. We don’t like it as much as him, but we believe it’s a great ‘bonus’ ingredient to have in a supplement (not 100% necessary, but definitely useful alongside effective fat burning nutrients).

We’re not sure why Olimp Sport Nutrition has added L-Tyrosine into Thermo Speed Extreme; this ingredient hasn’t shown to have any impact on your fat burning potential at all.

But that doesn’t mean it’s useless…L-Tyrosine has shown to improve your cognition (memory, focus and alertness) in numerous studies.

For this reason, we consider this to be a key ingredient in a Nootropic supplement. However, it’s not needed in a fat burner – especially because Caffeine Anhydrous offers enough boost in focus to suit the needs of a fat burner.

The worrying thing is that Olimp Sport Nutrition seem to have made this ingredient the ‘main event’; if you look at the ingredient list for Thermo Speed Extreme, it’s the highest dosed nutrient in this fat burner.

We would have preferred to see Cayenne Pepper Powder instead, which would have really suited to product’s name too. 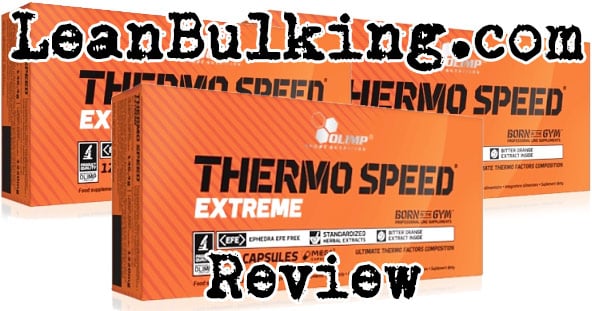 In terms of side effects, there’s one ‘danger’ ingredient in Thermo Speed Extreme – Citrus Aurantium.

In case you skipped the section above; Citrus Aurantium has been banned in countries such as the UK & Canada after causing harmful side effects (which is why we always advise you to avoid this ingredient).

Here’s the potential side effects from taking Thermo Speed Extreme:

In all fairness, Olimp Sport Nutrition haven’t done a bad job here. They’ve added some great ingredients such as Green Tea Extract, and dosed Caffeine sensibly (something not many companies manage to do).

However, we can’t ignore the fact that they’ve included Citrus Aurantium into Thermo Speed Extreme; as we’ve mentioned, this has been reported to cause numerous harmful side effects and even been banned in the UK and Canada!

We don’t see the need to risk side effects in order to reach your fitness goals – especially when there are safe and effective nutrients available. So we believe Olimp Sport Nutrition should have replaced Citrus Aurantium with Cayenne Pepper Powder (which would have been perfect for the whole ‘thermo’ theme too).

For this reason, although Thermo Speed Extreme is a good product, it can’t compete with the best fat burners on the market.

The addition of Citrus Aurantium has really ruined this fat burner.

You should always choose supplements containing safe and effective nutrients, instead of ingredients that have been banned for causing harmful side effects like Citrus Aurantium.