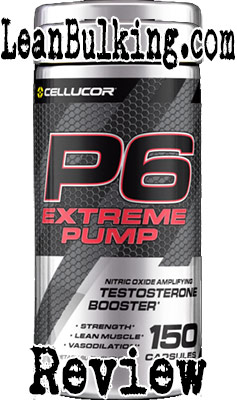 P6 Extreme Pump is Cellucor’s testosterone booster, released in 2017. It comes in 30 serving containers, with a serving size of 5 capsules per day – this is good, as it’ll keep your body topped up with key ingredients needed to boost test levels.

However, we’re unsure why Cellucor has tried to create a testosterone booster that delivers enhanced muscle pumps instead. This is a benefit that pre-workout supplements can deliver – so we prefer test boosters to contain more ingredients shown to raise your T levels.

After all, why else are you buying a testosterone booster for? Anyway, we’ll tell you a bit about the company behind P6 Extreme Pump – for those that don’t know.

Cellucor is a sports nutrition company that’s owned by Nutrabolt, which is based in Texas (USA). This brand was created in 2002 and has since become a popular for many supplements – especially their whey protein series.

But we’re here to review their addition to the testosterone booster series – P6 Extreme Pump. So let’s see what it’s all about below.

As we’ve mentioned, we don’t like that P6 Extreme Pump’s ingredients have all been hidden inside a proprietary blend; this means you’re not shown the exact dosage of each ingredient inside this testosterone booster (we’ll expand on this below).

Proprietary blends are mixtures of numerous ingredients that’re only shown to you as 1 quantity. As you can see from the ‘P6 Testosterone and Pump Blend’ on its ingredient list, the overall amount is 3,175mg – but you’re not shown the dosages of each ingredient inside such as Diindolymethane.

Not only that, we can see that Cellucor has left out most of the key test boosting ingredients shown to work. We prefer ingredients that are tried-and-tested, so this isn’t a good thing for us.

But there are some positives; P6 Extreme Pump contains one key ingredient that’s proven to work – Fenugreek.

Anyway, we’ll take you through each ingredient inside this test booster – so you can see how effective it really is for yourself. 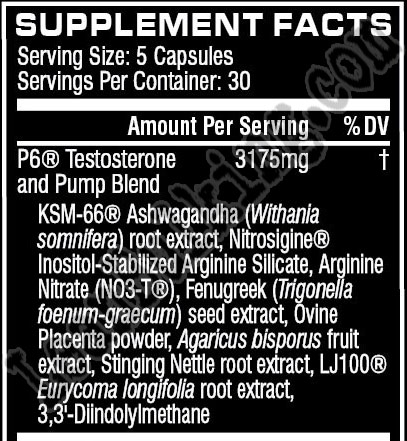 As we’ve mentioned, this is the proprietary blend inside Cellucor’s P6 Extreme Pump. Remember that no-one knows the exact dosages of each ingredient inside this blend, as we’re not shown it on the ingredient list.

This is a herb that’s been used in ayurvedic medicine for a long time, to boost general health. Although studies have shown that it has no effect on testosterone levels, it’s not completely useless…

Not much is known about this ingredient, and it’s actually a patented ingredient under the name of Nitrosigine.

In fact, the only studies we found conducted on this ingredient were paid for by the company who owns Nitrosigine – so we don’t trust any of these results.

Until we see further evidence that it works (from a non-bias study), we’ll consider this an unreliable ingredient.

Not only that, Inositol-Stabilized Arginine Silicate is believed to promote muscle pumps; this isn’t a key reason why we’d buy a testosterone booster supplement, so we don’t think this ingredient is even needed here.

We still don’t understand why Cellucor made a testosterone booster designed to also boost muscle pumps…especially when they could’ve added nutrients proven to raise test levels instead.

Fenugreek Seed Extract is the best ingredient in P6 Extreme Pump; it’s proven to raise your testosterone levels and libido – these are exactly the benefits you want when buying a test booster supplement.

For this reason, we’re always happy to see Fenugreek Seed Extract on ingredient lists. In fact, our highest rated test boosters all contain this ingredient.

But there’s a problem – it’s part of a proprietary blend. This means there might not be enough Fenugreek Seed Extract for it to work…

Ultimately, this is a great example of why proprietary blends are bad.

Also known simply as Sheep Placenta, just knowing what this is puts us off from taking P6 Extreme Pump…

Basically, Sheep Platenta has been added into P6 Extreme Pump as it’s believed to regulate hormone levels and strengthen your immune system.

However, there’s a reason why it’s not added into many test booster supplements – because it hasn’t proven to work (meaning it’s an unreliable ingredient).

This is the first time we’ve seen this ingredient in a supplement before. Although it’s labelled as a fruit here, you know recognize it by its informal name – button mushrooms.

They can be a great addition to your dinner, and contain many vitamins to improve your general health. However, it hasn’t proven to boost your testosterone levels – meaning it’s an ineffective ingredient in P6 Extreme Pump.

This is only other ingredient (alongside Fenugreek Seed Extract) that’s shown to raise your testosterone levels. But you know the problem – it’s part of a proprietary blend…

If you’ve skipped the other parts of this review, basically there might not be enough Stinging Nettle Root Extract inside P6 Extreme Pump for it to work.

Also known as Tongkat Ali and LongJack, this is believed to boost your testosterone levels and strengthen your erections.

While it hasn’t shown to affect you test levels, it’s shown promising results that suggest it might improve your erections. However, we’re still waiting for further evidence before we’re convinced it works.

For now, Eurycoma Longifolia Root Extract is an unreliable ingredient.

More commonly known as DIM, this has shown to stop testosterone converting into estrogen. However, no natural T-Boosters are strong enough to encourage your body to convert T into estrogen in the first place.

For this reason, companies often add DIM into their test boosters to fool you into thinking it’s more ‘powerful’. But don’t be fooled.

Not only that, DIM has shown to actually promote the conversion of T into estrogen when consumed in large dosages – as it’s part of a proprietary blend, you’re in danger of this happening. 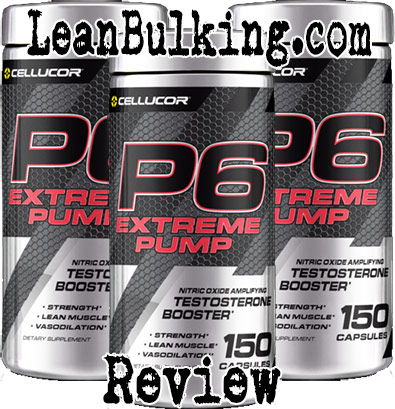 There’s 1 ingredient in P6 Extreme Pump that can cause side effects – DIM.

As we’ve mentioned, DIM can encourage your body to convert testosterone into estrogen when consumed in large amounts. For this reason, it’s the worst ingredient to add in a proprietary blend…but that’s exactly what Cellucor has done here…

Here’s the potential side effects from taking P6 Extreme Pump:

Basically, P6 Extreme Pump doesn’t contain enough ingredients to be able to even boost your test levels (so it’s potentially a useless product).

Not only that, it definitely doesn’t contain the right ingredients needed to enhance your muscle pumps – so Cellucor have failed in trying to do what they wanted to do.

If you’re looking for a supplement to boost your muscle pumps in the gym; then our top 3 pre-workout supplements will deliver this benefit for you.

But if you’re interested in improving your testosterone levels, then we recommend that you don’t choose P6 Extreme Pump for the job (our honest opinion).