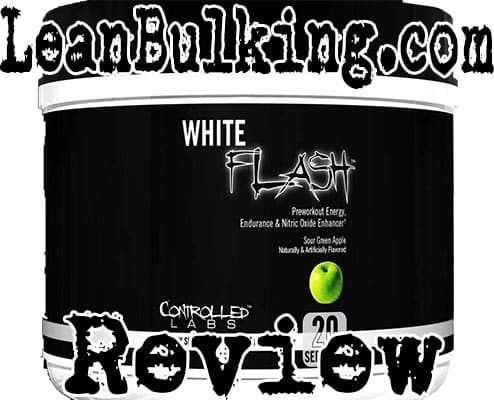 White Flash is a pre-workout supplement made by Controlled Labs, released in 2018. It comes in 3 flavors - Cherry Limeade, Sour Green Apple, and Strawberry kiwi. so it sounds pretty tasty.

How much is it? Well, its going to cost you $34.99 for 20 servings, putting it up there among the premium products on the market - so theres pressure on White Flash to succeed!

From first glance, were very happy that Controlled Labs hasnt grouped any ingredients together in any proprietary blends. So you can see the exact dosage of each nutrient in White Flash, which allows you a better glance into how safe and effective this pre-workout is.

Well analyze White Flashs nutrient profile for you in the next section. But first, well tell you more about the company behind it.

Who Are Controlled Labs?

Controlled Labs are a very well-known USA-based supplements company. Theyve definitely built their success from their pre-workouts, so this is why we were so excited to hear they released White Flash!

Were happy that their products are made in cGMP certified facilities, so all of their products will be made to a high standard. But what really makes the difference is what ingredients have been added to White Flash.

So lets take a look at whats under the hood and see which nutrients are inside, in the section below…

White Flash contains 10 ingredients overall, which we personally consider to be a good number to have in 1 supplement; from experience, weve found that products containing over 10 nutrients are often under-dosed.

Not only that, were happy that each ingredient in White Flash has been dosed well. In some cases, too well; we do believe the Caffeine Anhydrous dosage to be too high in our honest opinion. But those that consume bucket-loads of coffee will find it beneficial for them.

For the most part, we believe this is a very positive pre-workout. Potentially our favorite Controlled Labs supplement that theyve made so far!

Anyway, to give you a closer look, well take you through each ingredient in White Flash. By the end of this review, youll have a good idea of how safe and effective this pre-workout really is. 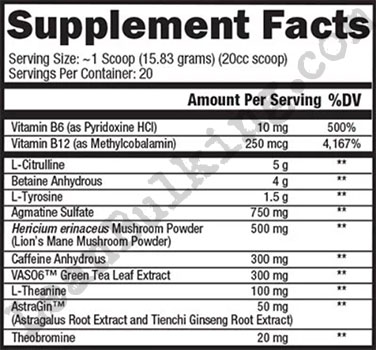 L-Citrulline is naturally found in watermelons and its very useful at increasing your nitric oxide levels. Its has a much higher absorption rate than L-Arginine, and were glad that companies are starting to choose L-Citrulline over its lesser rival recently.

So what does a rise in nitric oxide levels help you achieve? Well, it increases your blood flow, allowing more blood and oxygen to be pumped into your muscles; this has a direct effect on improving your muscular endurance - as well as inflating your muscles while you curl those weights.

While theres nothing wrong with L-Citrulline, we prefer its big brother, which is Citrulline Malate. This delivers the added benefit of enhancing your strength levels, due to being able to raise your ATP levels (in a similar way to Creatine Monohydrate).

So if we were being overly critical, we would have chosen Citrulline Malate. But Controlled Labs has done a great job by including a great dosage of L-Citrulline anyway.

Betaine Anhydrous is one ingredient that we personally dont agree with in White Flash.

Its added to most pre-workouts on the market, as its believed to improve your sporting performance. However, there simply hasnt been enough studies to prove that this is reliable.

Not only that, one thing that studies have proven Betaine Anhydrous to be capable of, is causing your breath and sweat to smell fishy; this side effect is officially known as trimethylaminuria, also known as fish odor syndrome.

Ultimately Controlled Labs has included a massive 4g of this nutrient in White Flash. If this was replaced with the same dosage of Creatine Monohydrate, then we would have been much happier!

Weve grouped these 2 ingredients together to analyze for 2 reasons - to save time (as my wife has just finished dinner, and Im hungry as f*ck), and because they both offer the same benefit.

So whats the benefit of L-Tyrosine and Lions Mane Mushroom Powder? Well, theyve both proven to help improve your focus in the gym.

Now, you might be thinking, Im not going to take any exams in the gym, bro. But remember that increased focus will improve your mind-muscle-connection, helping you to make the most of each training session.

For this reason, were happy to see that Controlled Labs has done their research and included L-Tyrosine & Lions Mane Mushroom Powder in White Flash. Although, we do believe only one of these ingredients is needed to improve your focus.

We could get into the whole science about what this molecule is. But that would bore you, and Im thinking about food the more I can smell the chili on the table.

So lets get straight to the point. Agmatine Sulfate is believed to raise your nitric oxide levels in a similar way to L-Citrulline.

However, weve already mentioned how effective L-Citrulline is, which is also in White Flash. So Agmatine Sulfate simply isnt necessary here.

Not only that, there havent been enough studies to make Agmatine Sulfate reliable anyway (in our honest opinion).

Caffeine Anhydrous is the best stimulant you can find in any gym supplement. Its safe and you can keep track of exactly how much Caffeine youre consuming (provided its not added to a proprietary blend).

The good news is that Controlled Labs has been sensible and havent added any ingredients to any blends.

But heres the bad news for us; there is a big 300mg dosage of Caffeine Anhydrous in White Flash, which is too much for us and puts us at risk of jittery side effects.

If you consume bucket-loads of coffee on a daily basis, then you might actually benefit from this dosage. But for most people, they might be slightly overwhelmed by this 300mg dosage.

However, theres only 100mg of L-Theanine in White Flash; this wont be enough to combat the big dosage of Caffeine Anhydrous, as studies show that you need to consume a higher amount of L-Theanine than Caffeine for it to work.

For this reason, we wish that Controlled Labs would have added a bigger dosage of L-Theanine in White Flash.

This is shown as Vaso6 on White Flashs nutrient profile, as that is the brand thats patented their own form of Green Tea Leaf Extract. Theres nothing wrong with this.

But while Green Tea Leaf Extract is proven to help promote your metabolism and promote fat loss, it works best when consumed in multiple dosages spread throughout your day. As you know, pre-workouts only offer 1 serving per day, which is taken around 20-30 minutes before your gym session.

Green Tea Leaf Extract makes a good bonus addition to White Flash. However, we would have preferred to see Creatine Monohydrate in this product instead, as its proven to boost your strength & endurance in the gym.

In case youre wondering, AstraGin is another patented ingredient.

What does it do? Well, its marketed as being capable of improving the absorption rate of nutrients, making it a useful bonus addition to White Flash.

However, its also not a necessary addition here, in our honest opinion.

Were slightly worried about Theobromine being in White Flash alongside the big 300mg dosage of Caffeine Anhydrous.

Why? Because Theobromine is a stimulant thats found in cocoa beans.

Ultimately, we would be slightly worried about consuming a 300mg dosage of Caffeine Anhydrous in the first place. So adding another stimulant into our body would increase the risk of us suffering from jittery side effects.

For this reason, we always recommend you to choose pre-workouts containing only 1 stimulant - to stay safe.

Youll be glad to hear that most of the ingredients in White Flash are free from side effects.

However, there are 2 main concerns we have with this pre-workout supplement; the huge 300mg dosage of Caffeine Anhydrous (with extra Theobromine on-top), and the Betaine Anydrous.

Why? Because Betaine Anhydrous is known for causing your breath and sweat to smell fishy, and big dosages of stimulants can cause jitters and energy crashes (which would send you home from the gym early).

Ultimately, this is why we always prefer companies to only add dosages of under 200mg Caffeine Anhydrous per serving to pre-workout supplements.

Here are the potential side effects of taking White Flash:

Its clear to see that White Flash is a very respectable product to add to the market - even if it is overfilled with crazy amounts of pre-workouts already!

We really have to praise Controlled Labs, because this really is the best pre-workout that weve seen them create. It has great dosages of L-Citrulline, L-Tyrosine and theyve even included another key ingredient in L-Theanine, which is rare to see.

However, this pre-workout could have been even better if some ingredients we replaced with other key nutrients. For example, we would have wanted to see Betaine Anhydrous replaced with the same 4g dosage of Creatine Monohydrate.

Saying that, for those that drink bucket-loads of coffee on a daily basis (more than 7-10 cups per day), theyll enjoy the big 300mg dosage of Caffeine Anhydrous. Even if it would cause us jittery side effects, in our honest opinion.

White Flash is going to be great for some people who are extremely tolerant to stimulants.

However, the small issues with White Flood mean that it cant compete with the highest rated pre-workout supplements on the market.