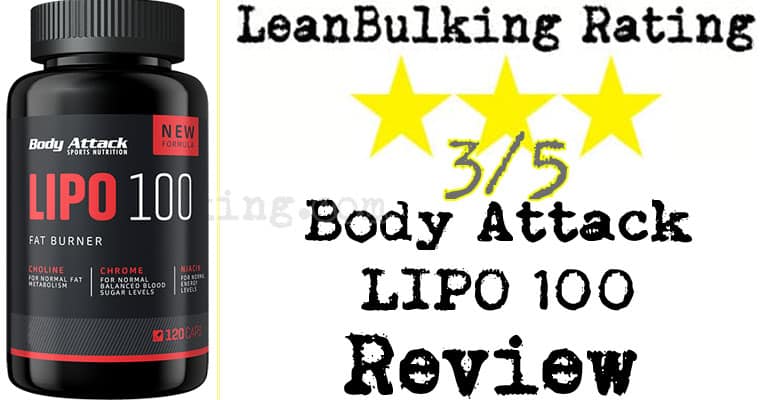 About the Product: Lipo 100 Fat Burner

A fat burner made by Body Attack, Lipo 100 is a supplement that is very popular in Europe. While it hasn’t had the same success in the USA or UK, we were asked multiple times by our readers to review this product. So this is for you, our fans!

Priced at €36.99 (around $42/£34), it’s not a badly priced product. There are many more expensive options, as well as cheaper fat burners, so it fits in the middle ground. This isn’t always a good thing though; sometimes it’s better to spend a bit more cash and gain a better product, so we’re interested to see how effective Lipo 100 is compared to other supplements on the market.

Anyway, in this review, we’ll give you a good idea of how safe and effective this fat burner really is. But first, let’s find out more about the company behind it.

Who is Body Attack?

Body Attack is a supplements company based in Germany, which explains why they’re products are more popular in Europe. They’ve been operating for around 20 years, so they aren’t a new face in the industry; this is good, as experience often leads to companies producing higher quality products more often.

Apart from that, it seems like Lipo 100 fat burner is their most popular product that is currently on the market. So, let’s take a look at which ingredients have been added to Lipo 100 below…

In terms of fat burners, we prefer supplements that contain fewer than 10 ingredients. This usually results in a much more concise formulation and keeps it more affordable for companies to optimally dose each nutrient.

Lipo 100 contains 9 ingredients, so we wouldn’t consider it to be overloaded. However, we’ll be checking to see whether the ingredients that have been added will help you get shredded or not.

As a result, we’ll take you through each ingredient in Lipo 100. By the end of this review, you’ll have a good idea of how safe and effective this fat burner really is.

Here’s Everything You Need to Know:

Guarana Extract is added to supplements because it is a form of stimulant. It acts in a similar manner to Caffeine Anhydrous; it’s known to be capable of boosting your energy levels.

We personally prefer Caffeine as we consume it more (in the form of coffee). However, we’ve tried fat burners containing Guarana Extract as the main stimulant source before without any issues.

The 1,200mg Guarana Extract might look excessive, but Body Attack does claim that Lipo 100 only contains an equivalent of 200mg Caffeine altogether; this isn’t going to cause jittery side effects.

Ultimately, we have no issues with this dosage. So, full marks to Body Attack for adding a sensible dosage of stimulants in Lipo 100.

This is a fat burning ingredient that we do not personally agree with.

Why? Because there have been many conflicting studies on Garcinia Cambogia, therefore we don’t consider it to be a reliable addition to Lipo 100 (in our honest opinion).

However, we can’t deny that there have been some positive studies too.

The main negative is that some medical experts believe that Garcinia Cambogia can react badly when consumed alongside medication for asthma and diabetes. As a result, we personally prefer when Garcinia Cambogia isn’t added to fat burners.

Green Tea Extract is a fantastic addition to any fat burner, so Body Attack has done well to include this in Lipo 100 here.

Why is it so good? Well, this nutrient contains Green Tea Catechins, which has shown to help promote fat loss in numerous studies. This is why it’s common knowledge that Green Tea is ‘healthy’ in general; other studies even suggest that Green Tea can even benefit almost every organ in your body!

For these reasons, we consider Green Tea Extract to be a key addition in Lipo 100. We recommend searching for fat burners containing at least 500mg dosages of this nutrient; as Lipo 100 fat burner contains 966mg, this is very good.

We’re not convinced by the addition of Ginseng Extract in fat burners.

It’s known for being generally good for your health, as well as being capable of improving your libido and erections. However, it’s not really proven to promote fat loss (in our honest opinion).

As a result, we consider Ginseng Extract to be more useful in testosterone booster supplements. Saying this, there’s no harm in having Ginseng Extract in Lipo 100 either.

An interesting addition to Lipo 100; L-Tyrosine is commonly found in Nootropic supplements due to its ability to improve your cognition. As a result, we don’t really consider it to be as necessary in a fat burner, although it can help to boost your focus in pre-workout supplements too.

Like Green Tea, everyone knows that Ginger is generally beneficial. We enjoy adding it to our tea when we’re ill, even if it slightly a placebo effect it usually helps.

However, in terms of fat burning, we enjoy consuming ingredients that we wouldn’t otherwise consume without supplementing it. For example, while you can drink green tea, y0u’ll have to drink tons to intake the optimal amount of Green Tea Catechins for fat loss.

Ultimately, it’s easy enough to add ginger to your meals or your tea. So, we wouldn’t really choose a fat burner specifically because it contains Ginger Extract Powder. With that in mind, we do agree that it is a beneficial ‘bonus’ nutrient in Lipo 100.

In case you’re wondering, Willow Bark Extract is used due to containing salicin; this has been used as a pain reliever for a very long time now (a few centuries).

But why is it used in fat burner supplements? Well, it’s believed to promote fat loss when consumed alongside thermogenics. But there aren’t enough studies proving this for it to be considered as a reliable fat burning ingredient, in our honest opinion.

Also known as Bitter Orange Extract, this is a controversial addition to fat burner supplements.

Why? Because this nutrient has been linked with causing side effects to previous users.

Saying this, we have seen positive studies showing that it does work to promote fat loss. As a result, we consider this to be an effective ingredient that is capable of causing side effects – it’s up to personal choice whether you want to take the risk.

We personally don’t see the need to take this risk when there are safe and effective nutrients such as Green Tea Extract available. Of course, this is just our honest opinion.

L-Carnitine Tartrate is more commonly seen in pre-workout supplements in recent times due to its ability to reduce muscle fatigue & damage. But it is also shown to promote fat loss, albeit to a lesser effect.

For this reason, while we don’t consider L-Carnitine Tartate to be a key addition to Lipo 100, it is a useful ‘bonus’ here.

Why? Well, it works by boosting your metabolic rate, as a result of its ‘spice’; if you’ve ever eaten a hot chili pepper before, then you’ll know that it’s capable of increasing your body temperature.

Great work by Body Attack to include this in Lipo 100’s formula.

Coleus Forskohlii is an ingredient that has interested us for a while now. It’s one of the newer nutrients that’s been added to supplements in recent times and is believed to be extremely beneficial.

What is it believed to do? It is thought to improve your testosterone levels while promoting fat loss at the same time.

As a result, if it does work, then it would be the ‘wonder’ nutrient for all men around the world.

However, there haven’t been enough studies showing that it does work reliably at the moment. So, before we begin celebrating this ingredient, we are waiting to see more evidence that it works. If more studies are conducted in the future, then we’ll be raving about this ingredient to everyone we know.

For now, though, we have to consider it an unreliable nutrient. 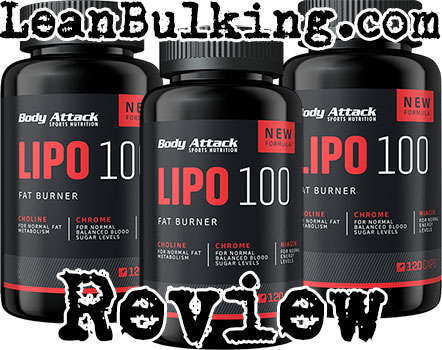 So, you’re wondering what side effects Body Attack Lipo 100 can cause. Well, the good news is that we believe that majority of the ingredients in this fat burner are safe from negative effects.

However, there is one potential issue; Lipo 100 contains the controversial Citrus Aurantium Extract (AKA. Bitter Orange Extract).

As mentioned previously in this review, Citrus Aurantium Extract has been linked with numerous side effects with past users. Since there are safe and effective nutrients that haven’t been shown to cause adverse effects, we would rather consume nutrients such as Green Tea Extract instead of potentially harmful ingredients such as Citrus Aurantium Extract.

Here are the potential side effects from taking Lipo 100 Fat Burner:

We’ve had a good look at Lipo 100 as a fat burner in this expert analysis. And we’re actually pretty impressed.

For a reasonable price (in a market filled with overpriced products) Lipo 100 fat burner holds its own. It can certainly compete with other products, especially cheaper ones that don’t contain optimal dosages of key nutrients such as Green Tea Extract.

We are just slightly disappointed that Citrus Aurantium Extract has been included (just our honest opinion). We’ve personally had some bad experiences with this ingredient, so we avoid it when possible; this is sort of like when people are put off consuming Caffeine after experiencing bad jitters.

As a result, we feel that Lipo 100 is certainly worth trying if you haven’t saved enough for the more premium fat burners on the market.