See Your Best Options In Our
- Best Pre-Workout For Women - 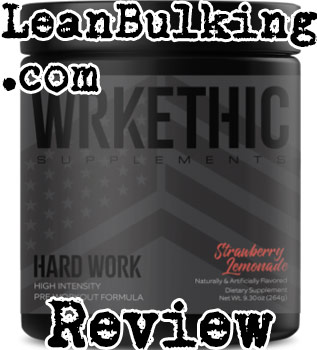 HARD WORK is a pre-workout supplement made by Wrkethic Supps. It costs $49.95 for 30 serving containers, with a choice of 2 flavors - Strawberry Lemonade and Twisted Citrus.

To show you how effective this pre-workout really is, well analyze its nutrition profile for you. But first, well tell you more about the company behind it.

Shes become one of the modern-day female bodybuilding icons, and has inspired countless women to begin lifting weights. Were big fans of Cass Martin, so were hoping that HARD WORK pre-workout will impress us too.

Anyway, we liked Wrkethic Supps website, with it being one of the best sites weve seen from a new company. Good job by Cass Martin here.

Were never too critical of new companies releasing their first products; we all started from somewhere, and everyone deserves time to get find their feet in the industry.

However, from first glance, HARD WORK pre-workout looks very good. It contains Citrulline, which can enhance your muscle pumps when consumed in optimal dosages, and Beta-Alanine can raise your muscular endurance in the gym.

But one thing we have to point out, is that HARD WORK pre-workout contains a proprietary blend (well expand on this below).

Proprietary blends are mixtures of numerous ingredients thatre only shown to you as 1 quantity. As you can see from the Energy Performance Blend on HARD WORK pre-workouts ingredient list, the overall amount is 570mg - but youre not shown the dosages of each ingredient inside such as Caffeine Anhydrous.

Anyway, now that you know why we dont like proprietary blends in supplements, well take you through each ingredient inside HARD WORK pre-workout.

By the end of this review, youll know exactly how safe and effective this pre-workout really is. 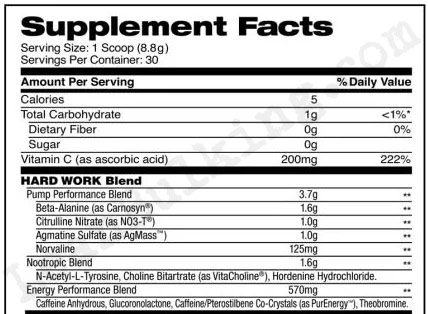 We can see why Wrkethic Supps has decided to add this into HARD WORK pre-workout; its known for being able to raise your muscular endurance in the gym.

However, many people prefer to avoid Beta-Alanine, due to it causing itchy and tingly skin (a side effect officially known as paresthesia).

For this reason, we prefer Creatine Monohydrate as it offers the same benefit, without causing any side effects.

A great addition to any pre-workout, Citrulline Nitrate is simply L-Citrulline bound to Nitrate.

However, the bad news is that Citrulline has only shown to work when consumed in dosages of 3,000mg per serving or more; as HARD WORK pre-workout only contains 1,000mg, it might not be completely effective here.

Agmatine Sulfate is extracted from L-Arginine through a chemical process, and has shown to be effective at treating drug addiction and reducing pain.

However, neither of these benefits are really necessary to improve your performance in the gym. And while its believed to raise your nitric oxide levels (which would enhance your muscle pumps), there hasnt been any studies that prove this yet.

For this reason, we have to consider Agmatine Sulfate to be an unreliable addition to HARD WORK pre-workout here.

Norvaline is another ingredient thats believed to raise your nitric oxide levels. And while its not completely reliable, there are more studies suggesting that it works than Agmatine Sulfate.

However, the only studies we could find were conducted on mice, not humans. So while it improves the nitric oxide levels of mice, theres no evidence to prove that it works as well in humans too.

L-Tyrosine is a key addition to any nootropic supplement, as its able to improve your cognition.

However, its not as necessary in a pre-workout, as you dont need improvements in your memory in the gym (unless youre frequently asked to remember your wifes shopping list…)

Anyway, it can make a great bonus addition to HARD WORK pre-workout, but its not a key ingredient here.

Not only that, as its been added into the Nootropic [proprietary] Blend, there might not be an effective dosage here; this is a great example of why companies need to stop using proprietary blends in their products.

Were disappointed to see Choline Bitartrate in HARD WORK pre-workout; its not shown to deliver any benefits to improve your gym session, but it causes your breath and sweat to smell fishy.

Even if youre not self conscious, smelling like a salmon in public will always make you aware of yourself…

For this reason, Choline Bitratrate is one of the nutrients that we always try to stay away from.

Hordenine is a molecule found in plants and some chemicals such as Synephrine (which isnt good, as Synephrine was banned after causing harmful side effects).

What does it do? Well, Hordenine is believed to be effective at promoting fat loss and raising your energy levels; its actually considered to be a stimulant, but no-one really knows the equivalent caffeine dosage it delivers (which puts you at risk from jittery side effects).

Ultimately, if fat loss is your main fitness goal, then we recommend choosing a specialist fat burner supplement instead.

In case youre wondering what this is, Anhydrous means that Caffeine has been dehydrated into powder form, so it can be added into supplements.

Caffeine Anhydrous is usually a perfect addition to pre-workouts, as its a pure form of Caffeine, meaning you can keep a close eye on the amount you consume to stay safe.

However, as its been added into a proprietary blend, youre not shown the exact dosage of Caffeine inside HARD WORK pre-workout.

Ultimately, this is a problem, as consuming unknown quantities of Caffeine can lead to jittery side effects and energy crashes - which is the opposite of what you want.

For this reason, we dont recommend consuming supplements containing stimulants in proprietary blends.

Glucoronolactone is quite commonly seen in energy drinks, but theres no evidence to prove that its able to raise your energy levels.

In fact, there hasnt been any study to prove exactly what it does; this is worrying, considering that its quite commonly consumed through energy drinks.

We never recommend consuming ingredients unless theyre both safe and effective. And we simply cant guarantee whether Glucoronolactone is or not.

PurEnergy is basically a patented form of caffeine, and its also been added into the proprietary blend here; this only raises your risk of suffering from jitters and energy crashes.

Weve grouped this with Theobromine, as its another stimulant, so it also makes it likely for you to suffer side effects. One thing we hope that Wrkethic does in the future, is only add 1 stimulant into her products. 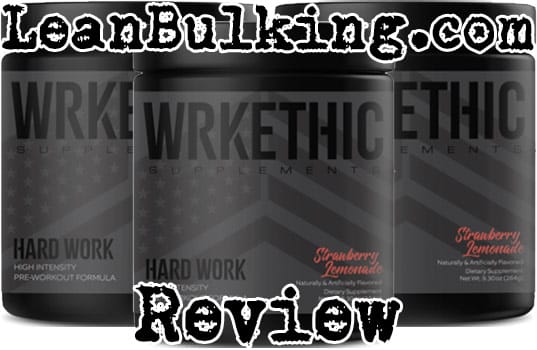 See Your Best Option In Our
- Best Pre-Workout For Women -

The big concern we have with HARD WORK pre-workout, is that it contains numerous stimulants in a proprietary blend; this means that youll be consuming unknown quantities of stimulants, which puts you at risk from side effects such as jitters and energy crashes.

However, while Beta-Alanine doesnt cause any harmful side effects, the itchy and tingly skin it can cause, can be quite distracting.

Heres the potential side effects from taking HARD WORK pre-workout:

For a first attempt at a product, Hard Work pre-workout is a very good attempt by Cass Martins Wrkethic. In fact, were confident that this company will release some great supplements in the future, so were excited for this.

However, judging HARD WORK against the best pre-workout on the market, we dont believe that it can compete with them; the overload of stimulants are likely to cause jitters and energy crashes, which will send you home from the gym early.

But there are positives here too; Beta-Alanine can enhance your muscular endurance, and theyve also added Citrulline, which is known for its ability to enhance muscle pumps.

HARD WORK pre-workout is a great first attempt at a supplement and has many great things about it.

But youre likely to suffer from jitters due to the overload of stimulants inside a proprietary blend.

2.5
See The Best Pre-Workout For Women!