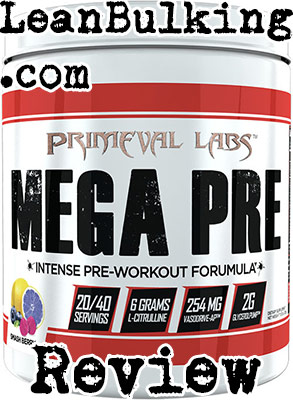 MEGA PRE is a pre-workout supplement made by Primeval Labs. It costs $49.95 for 40 or 20 serving containers, depending on whether you choose to consume 1 or 2 scoops each serving.

It comes in the choice of 2 flavors – Smash Berry & Pineapple Mango. Sounds tasty, but what’s really important is whether the ingredients inside are actually safe and effective.

We’ll get to that in the next section. But first, we’ll tell you more about the company behind this pre-workout.

Who are Primeval Labs?

But we did see that this company offer a range of other products, including fat burners.

Anyway, without wasting any more time, let’s see which ingredients are inside MEGA PRE below..

MEGA PRE contains 8 ingredients overall, which is a good number to have in a pre-workout; from experience, we know that supplements containing over 10 nutrients are usually under-dosed to keep production costs down.

We’re also glad that MEGA PRE doesn’t contain any proprietary blends, so you can clearly see the exact dosage of each ingredient inside.

However, from first glance, we can also see that some things are missing; some key pre-workout ingredients such as Creatine Monohydrate haven’t been added, and there’s no nutrients to raise your energy levels either.

Anyway, we’ll expand on this as we take you through each ingredient inside MEGA PRE. By the end of this review, you’ll know exactly how safe and effective this pre-workout really is. 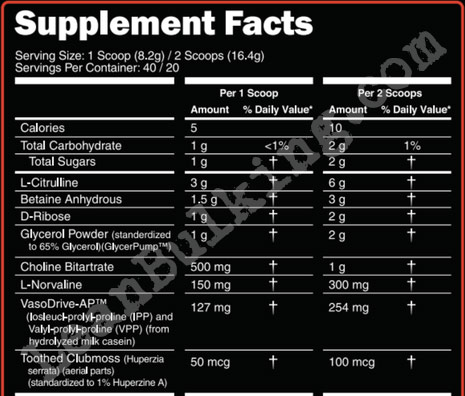 L-Citrulline is a great addition to any pre-workout, as it’s proven to enhance your muscle pumps in the gym, which is one of the main reasons we consume these supplements.

How does it work? Well, it raises your nitric oxide levels, which increases your blood flow – allowing more blood and oxygen to enter your muscles.

Ultimately, not only does this make you feel great, but it also enhances your muscular endurance, while reducing fatigue too.

We’re also impressed that Primeval Labs have added the optimal dosage here in MEGA PRE too.

If we were to give some criticism, we would state that Citrulline Malate would have been a better addition here; this is simply L-Citrulline with added Malic Acid, which raises your ATP similarly to how Creatine Monohydrate does.

However, this would be very critical, so we’ll repeat that Primeval Labs have done a great job here.

Why? Because it’s not proven to deliver any useful benefits to improve your gym session in any study.

For this reason, Betaine Anhydrous is effectively a useless ingredient that causes a side effect. So personally, we’d rather stay away from this nutrient.

Ultimately, we would have preferred Primeval Labs to have added something more useful, such as Creatine Monohydrate here.

Not much is known about D-Ribose, but it’s believed to raise your ATP levels like Creatine Monohydrate.

Now, if it was proven to work, this would be a great benefit, as it would improve your strength and endurance in the gym.

However, if you ask the majority of weight lifters, they’ll be consuming Creatine Monohydrate for one reason – everyone knows it works.

For now, D-Ribose is an unreliable ingredient, and to be honest, there’s no need to replace Creatine Monohydrate in pre-workouts; there’s simply no need to try and fix something that’s not broken.

Glycerol is commonly used to sweeten supplements and foods, as it’s known for being around 60% as sweet as sucralose (so much sweeter than sugar).

It’s also believed to be a carb source, so it might give you a quick spike in energy (but only as much as consuming simple carbs will).

The bad news is that there haven’t been many studies proving that Glycerol Powder actually benefits your gym session. For this reason, we consider this to be an unreliable addition to any pre-workout.

For these reasons, Choline Bitartrate is another ingredient that we try to avoid in pre-workout supplements.

L-Norvaline is believed to raise your nitric oxide levels, in a similar way to L-Citrulline.

While there have been some studies proving that it works, others suggest that it’s not very effective; this is why we consider L-Norvaline to be an unreliable nutrient.

However, we’d rather consume this than Choline or Betaine…

VasoDrive-AP is actually one of Primeval Labs’ patented ingredients; it’s said to be derived from casein protein, and is believed to enhance your nitric oxide levels and muscle pumps.

However, we haven’t seen any neutral studies proving that VasoDrive-AP is actually effective.

For now, we don’t see the need for VasoDrive-AP, as Primeval Labs have already added L-Citrulline which is tried-and-tested to work.

Companies add Toothed Clubmoss due to it containing high amounts of Huperzine A; this is known to enhance your focus, which can be a great benefit to help you concentrate on your gains.

However, the bad news is that Huperzine A has also shown to cause numerous side effects too. 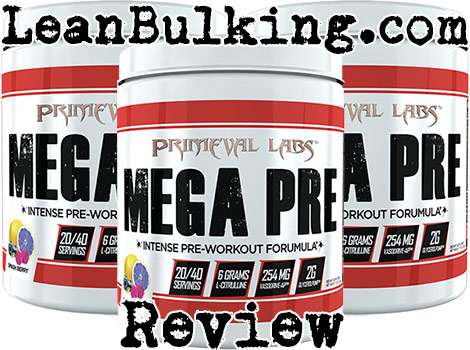 MEGA PRE has the potential to cause numerous side effects, due to containing ingredients that can cause them; Betaine Anhydrous, Choline Bitartrate and Huperzine A.

In quick summary, Betaine and Choline are known for making your breath and sweat smell fishy, while Huperzine A can cause numerous side effects that we’ll bullet point below…

Here’s the potential side effects from taking MEGA PRE:

MEGA PRE isn’t the ‘complete package’ when it comes to raising your game in the gym; it’s likely to enhance your muscle pumps, but you won’t get that ‘kick’ of energy which makes you feel invincible, due to the lack of stimulants.

But the good news is that it IS likely to improve your muscle pumps, which is one of the key benefits we look for in all pre-workouts.

Ultimately, we don’t believe that MEGA PRE justifies it’s price tag at $49.95, due to it not being the ‘complete package’. It simply can’t compete with others at this price range, due to not being able to raise your energy levels.

If you’re just looking for enhanced muscle pumps, then MEGA PRE is likely to work.

But considering it won’t raise your energy levels or strength in the gym, we don’t think it’s worth the $49.95 price tag – you can get much better pre-workouts for the same price.