ANIMAL FURY is a pre-workout supplement by Universal Nutrition. It costs $45.95 on GNC for 30 serving containers, and comes in 2 flavors – Green Apple and Watermelon.

We used to be big fans of green apple candy when we were younger (before we learned that sugar decreases your testosterone levels…). So this was the flavor we chose, and we must say, it’s one of the best tasting pre-workout supplements that we’ve tried – great job by Universal Nutrition here.

Anyway, the most important part of supplements, are determining which ingredients are inside. For this reason, we’ll be analyzing ANIMAL FURY’s nutrient profile for you in the next section.

But first, we’ll tell you more about the company behind this product.

Who are Universal Nutrition?

Universal Nutrition are a USA-based supplements company that’s been around since 1977. This makes them one of the older brands in the industry, and they’ve established a great reputation through fat burner and testosterone booster supplements.

However, you’re here to learn about their pre-workout, ANIMAL FURY. So let’s stop wasting time and see which ingredients Universal Nutrition have added inside. 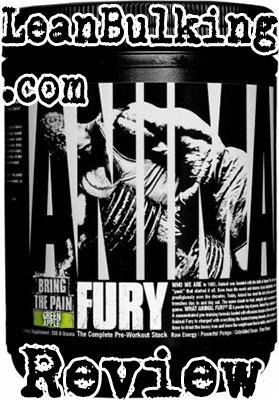 From first glance, we’re happy with what we see. Universal Nutrition have kept it quite simple, adding only 5 ingredients; this is great to see, as we usually find that supplements containing over 10 nutrients are usually under-dosed and ineffective.

We were even more glad to see that Universal Nutrition have done their homework and dosed Citrulline Malate optimally at 6,000mg per serving. You’d be surprised with how many companies fail to do this, so this gets a big thumbs up from us.

The only slight complain we have with ANIMAL FURY, is that it contains a HUGE dosage of Caffeine; if you’ve consumed too much coffee before, then you’ll know that Caffeine can cause jittery side effects, ultimately leading to a nasty energy crash (which isn’t what you want in the gym).

Anyway, we’ll explain everything in more detail as we take you through each ingredient inside ANIMAL FURY. By the end of this review, you’ll know which whether this pre-workout is worth trying out, or staying away from.

Now, BCAAs have shown to play an important role in muscle protein synthesis, meaning they can promote muscle growth. For this reason, all 3 BCAAs are found in protein powders.

Again, from a personal perspective, we prefer to buy BCAAs separately – so we can consume them at times suited to us. But ultimately, there’s nothing wrong with having BCAAs in ANIMAL FURY here.

Citrulline Malate is the best nutrient when it comes to muscle pumps. It’s proven to raise your nitric oxide levels when consumed in 6,000mg dosages, which directly leads to increased blood flow.

One thing’s for sure – it works.

We’re really glad to see that Universal Nutrition have done their research and added the correct amount of Citrulline Malate into ANIMAL FURY; especially after reviewing hundreds of products that contain massively under-dosed Citrulline Malate.

Beta-Alanine is one of the most controversial ingredients in the supplements industry. Basically, many people dislike it, because it’s shown to cause a side effect called paresthesia (which is a tingling and itching on your skin).

However, you can’t ignore that Beta-Alanine has shown to be effective at enhancing muscular endurance. So ultimately, it’s up to personal preference whether you’re prepared to feel itchy in the gym while you lift weights.

Personally, we prefer Creatine Monohydrate; this delivers the same benefits without causing any side effects. But again, we’ll repeat that this is simply down to personal preference.

L-Tyrosine can be considered as a key addition to a nootropic supplement, as it’s proven to improve your cognition.

However, we don’t believe it’s as useful in a pre-workout; you don’t really need enhanced memory in the gym, unless you usually forget what your wife asked you to pick up from the store…

Ultimately, Caffeine (which is a common ingredient in pre-workout supplements) improves your focus enough to benefit your workout. So there’s no need for ingredients specifically for this job.

But saying that, there’s no negatives to having L-Tyrosine here either. So it can be a great ‘bonus’ addition to ANIMAL FURY here.

In case you’re wondering, ‘anhydrous’ simply means that Caffeine has been dehydrated into powder form, so it can be added into supplements.

Anyway, Caffeine Anhydrous is the best stimulant you can find in any gym supplement. Everyone knows that it’s safe and effective at raising your energy levels, making it great for those days you feel exhausted from a long day at work.

However, it’s also important to know that Caffeine can cause jittery side effects and energy crashes; especially when consumed in dosages over 200mg per serving in pre-workout supplements.

Universal Nutrition have added a HUGE 350mg dosage of Caffeine Anhydrous into ANIMAL FURY. So this makes it likely to cause side effects.

Personally, we always try to choose pre-workouts containing under 200mg Caffeine per serving, to stay safe. 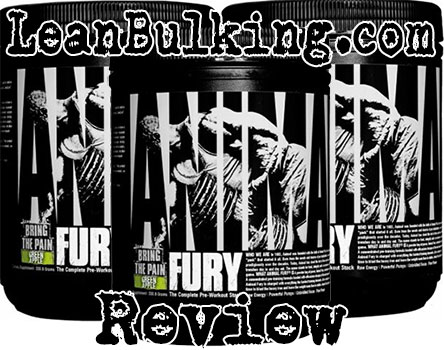 The only real concern with ANIMAL FURY is the HUGE 350mg dosage of Caffeine Anhydrous; as we’ve mentioned, this puts you at risk of suffering from jitters and energy crashes.

However, we’ll also repeat that Beta-Alanine has shown to cause paresthesia (which is a tingling & itching sensation on your skin).

Here’s the potential side effects from taking ANIMAL FURY:

ANIMAL FURY is definitely one of the better pre-workouts we’ve seen on the market. This is evident through the addition of optimally dosed Citrulline Malate (6,000mg per serving).

Not only that, it contains 2 great ‘bonus’ ingredients, BCAAs and L-Tyrosine, with Beta-Alanine being able to enhance your muscular endurance too.

However, what let’s this pre-workout down, is the fact that Universal Nutrition have added a HUGE 350mg dosage of Caffeine Anhydrous; this is very likely to cause jitters and energy crashes, which will ruin your gym session and slow your progress on your fitness goals.

Ultimately, when you’re spending cash on a gym supplement, the last thing you want is to suffer from side effects.

For this reason, while ANIMAL FURY has some great factors, we don’t believe that it competes with the highest rated pre-workout supplements on the market.

However, they shouldn’t have added the HUGE 350mg dosage of Caffeine Anhydrous, which makes this product likely to cause side effects.

For this reason, personally, we would look elsewhere for a pre-workout to ‘kick’ you towards your fitness goals.