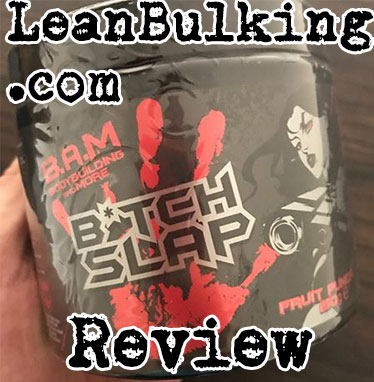 B.A.M Bitch Slap is a pre-workout supplement made by Bodybuilding And More (B.A.M). It costs €37.64 for 30 serving containers, with the 1 flavor option being Fruit Punch.

This pre-workout comes with a premium price tag, so we’re interested in seeing whether B.A.M Bitch Slap can live up to it. We’ll do this by analyzing its nutrient profile, but first we’ll tell you more about the company behind it.

As we’ve mentioned, B.A.M stands for ‘Bodybuilding And More’. They’re based in Dresden (Germany), but we couldn’t find much more information about them, as their website wasn’t working.

We’ve reviewed their fat burner, Shredded Bitch, so it’ll be interesting to see whether B.A.M Bitch Slap can prove to be better.

Let’s take a look below…

B.A.M Bitch Slap contains 9 ingredients overall, which is a good amount to have; we usually find that supplements containing over 10 nutrients are usually under-dosed.

As a result, we’ll be keeping a close eye on the dosages of ingedients inside B.A.M Bitch Slap.

Our first impressions of this pre-workout are quite mixed. It contains some great nutrients, such as Caffeine and Rhodiola Root Extract, but it also includes potentially harmful nutrient such as Citrus Aurantium Extract (Bitter Orange Extract).

Not only that, every ingredient inside B.A.M Bitch Slap is part of a proprietary blend – we’ll expand on this below.

Proprietary blends are mixtures of numerous ingredients that’re only shown to you as 1 quantity. As you can see from the ‘Bitch Slap STIM’ proprietary blend on its ingredient list, the overall amount is 3,850mg – but you’re not shown the dosages of each ingredient inside such as Caffeine.

Anyway, now that you know why we don’t like proprietary blends. We’ll take you through each ingredient inside B.A.M Bitch Slap, so you can see how safe and effective it really is. 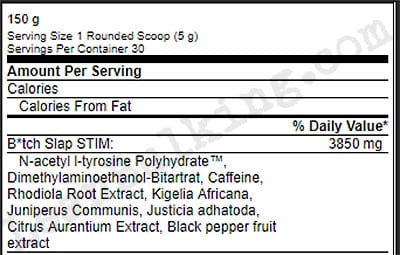 L-Tyrosine is a ‘brain booster’ ingredient that’s proven to enhance your cognition.

Saying that, there’s nothing negative about having L-Tyrosine here either. So it can be a good ‘bonus’ addition to B.A.M Bitch Slap here.

Also known simply as DMAE, we prefer to stay away from this ingredient as it’s shown to be teratogenic; this means that DMAE can cause birth defects to unborn babies.

Again, DMAE is another ‘brain booster’ ingredient, so it’s not even needed in B.A.M Bitch Slap either. For this reason, we advise you to avoid this ingredient, as it comes with serious potential side effects.

Caffeine is the best stimulant you can find in any pre-workout supplement. Everyone knows it’s safe and is able to boost your energy levels too.

However, if you’ve every consumed too much coffee before, then you know that Caffeine can cause jittery side effects too. For this reason, it’s important that you check the exact dosage of Caffeine that you consume.

But the problem is, as this stimulant is part of a proprietary blend here, you’ll never know whether B.A.M Bitch Slap is safe or not (until you take it and potentially suffer from jitters and energy crashes).

As a general rule, we advise that you consume under 200mg Caffeine per serving with pre-workout supplements; this will ensure you experience benefits, while avoiding jittery side effects.

Rhodiola Rosea is a key addition to any pre-workout supplement; it’s shown to reduce muscular fatigue and damage, while being able to strengthen your mind-muscle-connection in the gym.

Studies have shown that it’s effective in dosages as low as 100mg per serving. However, there’s no guarantee that there’s an even this amount is contained in B.A.M Bitch Slap, as Rhodiola Rosea Extract is part of a proprietary blend.

Ultimately, this is a great example of why we advise you to stay away from supplements containing these blends.

Companies are always looking for the ‘next big thing’ when it comes to ingredients. Well, we’ve seen an increase in products containing Kigelia Africana, so we’re guessing that many believe that this is going to be effective.

However, the worrying thing is that there hasn’t been enough evidence to prove that it’s safe or effective yet.

Not only that, you’ll be also worried to hear the the Kigella Africana can be poisonous when consumed in large dosages; as it’s hidden in a proprietary blend, you might be at risk from nasty side effects.

Again, this is a great example of why companies need to stop using proprietary blends.

Also known as the common juniper berry, this is a great addition to a gin and tonic. However, while it can offer anti-oxidants, it’s not going to improve your performance in the gym.

For this reason, we don’t believe that Juniperus Communis is necessary in B.A.M Bitch Slap. The worrying thing is that this could be taking up the majority of the space in the ‘Bitch Slap STIM’ proprietary blend without you knowing.

This is more commonly known as ‘Malabar Nut’ and is a plant that’s used for medicinal purposes in Asia and traditional Indian medicine.

Justica Adhatoda is believed to be effective in treating respiratory disorders (eg. Asthma), but this doesn’t make it a key addition to B.A.M Bitch Slap.

We mentioned at the start of this review that Citrus Aurantium Extract is the worst ingredient in B.A.M Bitch Slap.

Why? Because it’s been commonly reported to cause harmful side effects, due to it containing high amounts of Synephrine (which has been banned for use in supplements).

Basically, Citrus Aurantium Extract passes through a legal loophole, allowing companies to add Synephrine indirectly. However, we advise you to avoid supplements containing this ingredient to stay safe.

Now, the worrying thing is that Citrus Aurantium Extract is part of the proprietary blend, so there could be a large dosage inside B.A.M Bitch Slap; this would put you at increased risk from side effects.

In case you’re wondering, yes, this is the same stuff you sprinkle on your food.

However, it’s more beneficial than you might think; black pepper extract has proven to improve your digestion and the absorption rate of supplements it’s added to (which increases the overall effectiveness of the product).

While it’s not a key addition to any supplement, it can be a useful ‘bonus’ to have in B.A.M Bitch Slap.

The main concern we have with B.A.M Bitch Slap, is that it contains Citrus Aurantium Extract in a proprietary blend; this means that it’s included in an unknown quantity, which increases your risk of suffering from side effects.

Not only that, DMAE can cause birth defects in unborn babies, while Caffeine can also cause jittery side effects (due to it being added in an unknown quantity).

Ultimately, this should be a great example of why we don’t like supplements containing proprietary blends.

Here’s the potential side effects from taking B.A.M Bitch Slap:

It’s a shame that every ingredient in B.A.M Bitch Slap has been hidden in a proprietary blend. It had some great potential, as it contains some great nutrients, such as Caffeine, Rhodiola Rosea and L-Tyrosine.

However, what lets this pre-workout down is that it contains potentially harmful ingredients such as Citrus Aurantium Extract and DMAE (and even Caffeine can cause side effects when added into proprietary blends).

For this reason, we advise you to avoid supplements containing these blends, to stay safe from side effects.

B.A.M Bitch Slap contains some great ingredients, but it’s let down by the addition of Citrus Aurantium and DMAE, which have both shown to cause side effects.

For this reason, we don’t believe it justifies it’s €37.64 price tag, and can’t compete with the highest rated pre-workouts on the market.