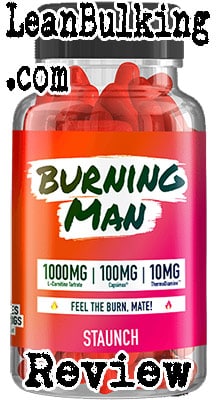 Burning Man is a fat burner supplement made by Staunch Nation. It costs $39 for 30 servings, with a serving size of 3 capsules per day.

This is a good serving size, as 3-4 daily capsules ensures that your body is always topped-up with key nutrients needed to boost its metabolism and burn more fat (so you get the most for your money).

Anyway, well take you through the company behind Burning Man, before analyzing the ingredients inside this fat burner.

Who are Staunch Nation?

This is a good question…wed never heard of this supplements company before.

And their about us page didnt lead us to anywhere useful either…so we still dont know much about this company.

Simply put, it says alot about a company when they only focus on the design of their website - instead of actually adding quality information that tells you about them.

Anyway, well go to what we know - and thats the nutrient profile of Burning Man below.

However, Burning Man seems to be dosed quite well; there even seems to be an optimal 3,332IU (83mcg) dosage of Vitamin D3 in here (although its not really needed in a fat burner).

Anyway, well take you through this fat burners nutrient profile - so you can see how effective Staunch Burning Man really is. 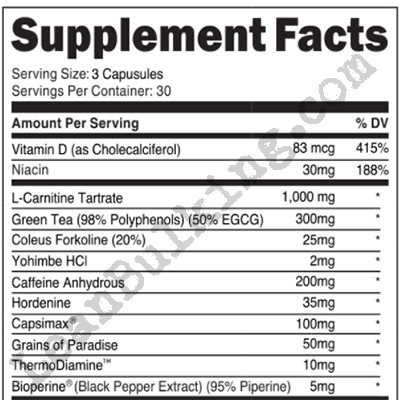 Also known as cholecalciferol, this hormone is created by your body after being exposed to sunlight. Its very beneficial for general health, improving your bone strength and even raising your testosterone levels.

However, not many fat burners contain Vitamin D3 for a reason - its not really needed in these supplements.

Although Vitamin D3 is a key ingredient in testosterone booster supplements, its not the best option in Staunch Burning Man.

This is naturally found in avocados and can reduce fatigue while improving your focus in the gym; these benefits make it great in pre-workout supplements, but its not a key ingredient in fat burners.

However, as it doesnt cause any side effects - theres no negatives to having L-Carnitine in Staunch Burning Man.

Green Tea is the first key fat burning ingredient in Burning Man by Staunch Nation. Its proven to boost your metabolism and promote fat loss (and its one of the best thermogenic ingredients you can find).

Not only that; Green Tea Extract has shown to benefit almost every organ in your body. So you can see how good this ingredient really is.

Were always happy to see Green Tea Extract in fat burners. Its been dosed well, so great job by Staunch Nation here.

Were not sure whether Staunch Nation has misspelled Coleus Forskohlii on their ingredient list. But we havent heard of Coleus Forkoline before.

If it is Coleus Forskohlii; this has shown to promote fat loss, so its not a bad nutrient to have here.

However, as there hasnt been many studies on this ingredient - consider it an unreliable ingredient in Staunch Burning Man.

This is the first mistake by Staunch Nutrition here.

Yohimbe is an ingredient we always avoid in supplements; its extracted from Yohimbine, which has been banned in numerous countries after causing harmful side effects.

For this reason, we advise you to stay away from products containing Yohimbe - to stay safe. Well list the side effects in the section after this.

Caffeine Anhydrous is dehydrated caffeine thats been added into supplements in powder form. And its one of the best ingredients you can find in fat burners.

Why? Because a raise in energy levels when youre consuming less calories is great - which is exactly what Caffeine offers you.

The usual problem is that Caffeine has been over-dosed (which can lead to numerous problems). However, Staunch Nation has done well here - adding a sensible 200mg dosage spread out into 3 capsules - meaning theres 100mg Caffeine per serving.

This should provide enough energy boosts without causing side effects such as jitters and energy crashes.

Hordenine is found in numerous plants and is believed to be a stimulant. But this isnt a good thing; we mentioned there was a good dosage of Caffeine in each capsule, but Hordenine could push you over the edge and cause jitters.

The good news is that Hordenine hasnt shown to work in any official studies - so you might be safe. But its not worth the risk of suffering from side effects.

Its usually these small mistakes that new companies make. But were sure that Staunch Nation will learn from this, and improve their formula in the future.

Simply put, this chilli pepper is proven to raise your body temperature (which directly boosts your metabolism). In fact, Cayenne Pepper is known as one of the best thermogenic ingredients for this reason.

Its proven to work, and you cant argue with it; weve all eaten spicy foods before and needed to cool down.

Like Cayenne Pepper, Grains of Paradise is also a spice thats believed to work as a thermogenic. However, its only recently been added into supplements (since 2017), so theres not been many studies proving whether it works.

For this reason, we believe this is an unreliable ingredient (that could cause side effects).

Also known as Evodiamine, this is an chemical thats isolated from the unripe fruit of Evodia Ruatecarpa. Basically, its an average ingredient thats been given a fancy name to make it sound better.

Anyway, theres no studies proving that ThermoDiamine actually helps you burn fat. So this is another unreliable ingredient in Staunch Burning Man.

All you need to know about Bioperine, is that its a patented form of Black Pepper Extract…yes, someone paid to protect black pepper…

But its more beneficial than you think; Black Pepper Extract is able to improve your digestion and the absorption rate of other ingredients its consumed with.

For this reason, although Black Pepper Extract is never a key ingredient - its useful when consumed with key fat burning nutrients. 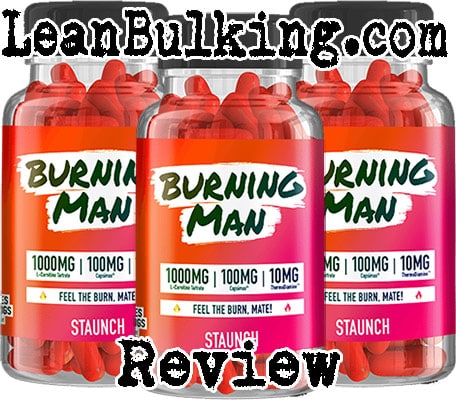 Theres really only 1 ingredient in Stauch Burning Man thats likely to cause side effects; Yohimbe.

As we mentioned, Yohimbe is extracted from Yohimbine (which is banned in the UK & Canada, among others) after causing harmful side effects.

In fact, Yohimbe hasnt shown to be any safer than Yohimbine - so we believe its only a matter of time before it gets banned too. For this reason, we recommend that you avoid any supplements containing Yohimbe (to stay safe from side effects).

Heres the potential side effects from taking Burning Man:

Considering we hadnt heard of Staunch Nation before; were pretty impressed with Burning Man fat burner.

Why? Because Burning Man contains some key ingredients proven to work - and even the bonus of Vitamin D3 too.

However, the Yohimbe and addition of unreliable ingredients such as ThermoDiamine & Hordenine has let this fat burner down.

We only recommend fat burner supplements that contain 100% natural tried-and-tested nutrients shown to promote fat loss - without any side effects.

And unfortunately, Staunch Burning Man can cause numerous side effects due to containing Yohimbe.

Although Staunch Burning Man contains some great fat burning ingredients. It also contains Yohimbe, which we always avoid due to it causing numerous side effects.