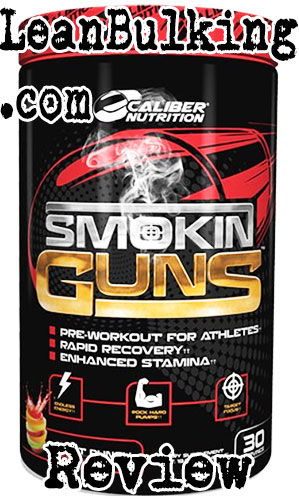 Smokin Guns is a pre-workout supplement made by Caliber Nutrition. It costs $44.99 for 30 servings, and comes in 1 flavor - Bullet Punch.

On first glance, this product looks like it contains some great ingredients. So well analyze its nutrient profile after telling you about this company below.

Who Are Caliber Nutrition?

Caliber Nutrition is a supplements company founded in 2017 - which makes them one of the new kids on the block (not Jenny though).

However, well still be giving you our honest opinion on Smokin Guns (we dont give out free-passes on LeanBulking, especially when your safety is at risk).

Anyway, as Caliber Nutrition is a new company; there wasnt much info on them, so well move onto analyzing Smokin Guns ingredient list below.

The first thing we noticed about Smokin Guns by Caliber Nutrition; every ingredient inside this pre-workout is part of proprietary blends (well explain why this is bad below)…

Proprietary blends are mixtures of numerous ingredients thatre only shown to you as 1 quantity. As you can see from the Endurance Pump Blend on Smokin Guns ingredient list - the overall amount is 11.25g (11,250mg) - but youre not shown the dosages of each ingredient inside such as DiCaffeine Malate.

This increases your risk of side effects such as jitters and energy crashes - as well as making it uncertain whether this pre-workout will work. For this reason, we try to avoid any supplement that contains proprietary blends.

However, on a positive note; Smokin Guns contains some of our favorite pre-workout ingredients too. So lets get to the main event…

Well take you through the main ingredients inside this pre-workout - so you can see how good Smokin Guns really is. 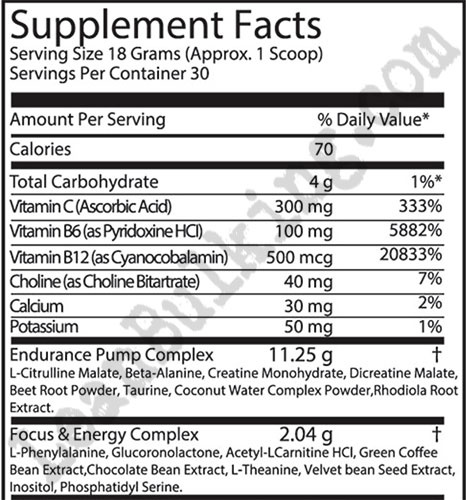 Citrulline Malate is one of our favorite pre-workout ingredients; its proven to enhance your muscle pumps when consumed in 6,000mg dosages.

But heres the problem - Citrulline Malate is inside a proprietary blend. This means no-one knows whether its been dosed optimally in Smokin Guns (making it likely to be ineffective).

Think about it; if a company spends more money to dose ingredients properly, then theyll make sure to include it in their advertisement. So its not good news when they hide dosages in these blends.

Beta-Alanine is always controversial; some like it, as it can enhance your muscular endurance. But others dont like it because it causes a side effect called paresthesia.

Whats paresthesia? Well, its a tingling and itching sensation on the skin of your face and body.

Personally, we dont like this side effect as it distracts us from lifting weights. However, we know others that dont mind it.

Ultimately, as were not fans of paresthesia, we choose to avoid pre-workouts containing Beta-Alanine. And as Creatine Monohydrate offers the same benefit without causing side effects, we prefer that (well expand on this below).

Creatine Monohydrate has been used by bodybuilders for decades now. In fact, creatine in general hit the spotlight when athletes used it during the Barcelona Olympic games in 1992.

Ever since then, no-one could argue with the effectiveness of Creatine. And studies show that Creatine Monohydrate is the most effective form.

What does it do? Answer: its proven to boost your strength and endurance in the gym - great benefits for a pre-workout supplement.

For this reason, Creatine Monohydrate is a key pre-workout ingredient. But again, the problem is - its part of a proprietary blend (so there might not be enough in Smokin Guns to work).

This is a patented ingredient and is a mix of Creatine and Malic Acid. But as its part of a proprietary blend, this isnt a good thing.

Why? Because consuming too much Creatine can cause stomach aches and diarrhea (you dont want to suffer that while squatting in the gym…).

Beetroot Powder is another key ingredient; it works well with Citrulline Malate to further enhance your muscle pumps.

How does it work? Well, as it contains high amounts of nitrate - its able to boost your nitric oxide levels (leading to increased blood flow and muscle pumps).

We probably sound like a broken record player; but as its in a proprietary blend, it might not work.

Taurine is an organic acid containing sulfur. But its not able to boost energy levels like some think.

However, studies have shown that Taurine can help reduce cramping - this can be useful, but you can achieve the same benefit by keeping yourself hydrated.

For this reason, we believe theres more benefits to consuming coconut water in pre-workouts. So Caliber Nutrition has done a good job by adding this in (well expand on coconut water below).

As we just mentioned, Coconut Water Powder helps keep you hydrated due to containing high amounts of electrolytes.

In fact, Coconut Water is known as natures sport drink for this reason. Ultiamtely, this isnt going to help you smash your PBs on its own - but itll help you perform at your best.

For this reason, we always consider Coconut Water Powder as a great bonus to consume alongside other key nutrients.

This is a herb used in traditional Chinese medicine (found in Scandinavia); its proven to reduce fatigue while improving your focus in the gym.

As these are great benefits to improve your session, we believe Rhodiola Rosea is a key pre-workout ingredient. But as its part of a proprietary blend, it might not work in Smokin Guns.

Again, this is a great example of why we dont like proprietary blends.

While you might not have heard of L-Phenylalaline, its shown to be dangerous to those with a genetic disorder called phenylketonuria.

This wont affect many people. But we still dont believe an ingredient harmful in any situation should be used in supplements.

For this reason, we recommend avoiding products containing L-Phenylalaline.

Again, this is another worrying ingredient; Glucuronolactone hasnt been researched enough to state its 100% safe.

However, its still used in a energy drinks (and as you can see, pre-workout supplements). Personally, we always avoid ingredients that arent proven to be safe - so well be staying away from Glucuronolactone.

L-Carnitine is one of our favorite ingredients in pre-workouts. So great job by Caliber Nutrition here.

Why? Because its shown to reduce fatigue while improving focus in the gym (which are great benefits to get from taking a pre-workout supplement).

Were not sure why Caliber Nutrition has added Green Coffee Bean into Smokin Guns pre-workout; while its a great fat burning ingredient, its not needed here.

Also known as Theobromine, this is another stimulant (which isnt good, as Smokin Guns already contains Caffeine).

Not only that - as its part of a proprietary blend, you dont know whether its been dosed sensibly (meaning its likely to cause side effects such as jitters and energy crashes).

Again, this is a great example of why we dont like proprietary blends in supplements.

When consumed with Caffeine, L-Theanine can enhance the stimulants benefits, without increasing the risk of jitters. However, as Smokin Guns pre-workout contains 2 stimulants, you cant escape the risk of side effects here.

Also known as Mucuna Pruriens, its shown to positively affect your testosterone levels in studies. However, this is a pre-workout supplement - not a testosterone booster.

You might not have heard about Inositol, for good reason…its not needed in Smokin Guns (or any pre-workout).

Basically, its believed to calm you down and help improve sleep quality; as this is the opposite of what you want when taking a pre-workout, we stay away from Inositol.

Ultimately, you want improved energy levels with pre-workouts - not to be ready for bed.

Phosphatidyl Serine is actually a key ingredient when added to Nootropic supplements. However, as Smokin Guns pre-workout already contains Caffeine & L-Carnitine to improve your focus - theres no need for Phosphatidyl Serine here. 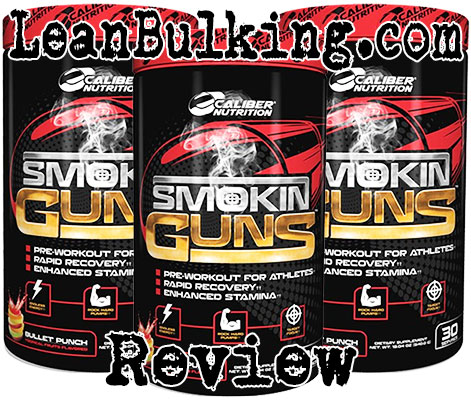 There are 3 things that can cause side effects in Smokin Guns - Beta-Alanine, L-Phenylalaline, and the overdose of stimulants.

In quick summary; Beta-Alanine causes paresthesia (a tingling and itching sensation on the skin of your face and body). L-Phenylalaline is seriously dangerous to those with phenylketonuria - and finally, as Smokin Guns contains more than 1 stimulant, it can cause jitters and energy crashes.

Heres the potential side effects from taking Smokin Guns:

Even though Caliber Nutrition was founded in 2017, they should have researched more before creating Smokin Guns pre-workout.

Theres really no need to add over 10 ingredients into 1 pre-workout supplement; this is bad, as Smokin Guns contains almost 20 different ingredients.

What makes this even worse is that every ingredient is part of proprietary blends (meaning their dosages are hidden - so you cant see exactly how effective this supplement is).

We never take risks when it comes to supplements; for this reason, we only recommend supplements containing tried-and-tested ingredients that dont cause side effects.

But one positive of Smokin Guns is that it contains some key pre-workout ingredients. But its just a shame they included them in proprietary blends.

You can see that Caliber Nutrition are a new company, as they should have done more research before creating Smokin Guns.

They shouldve not included any proprietary blends, and chosen 5-8 ingredients to dose optimally.

Hopefully they will learn from this when formulating their next supplement.

3.5
Check Out The Best Pre-Workouts This Year!