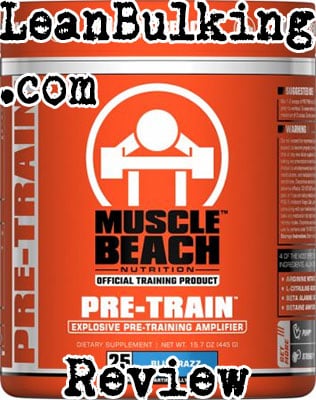 Pre-Train is a pre-workout supplement made by Muscle Beach Nutrition. It comes in 25 serving containers priced at $29.79, and comes in 4 flavors – Blue Razz, Fruit Infusion, Mango Maniac, and Tigers Blood.

We didn’t really like the sound of any flavors. But after being sent a sneak-peak of Mango Maniac, we were quite impressed with the taste (it’s not our favorite tasting pre-workout, but it’s better than many others we’ve tried).

Anyway, we’ll analyze Pre-Train’s nutritiont profile for you in the next section. But first, we’ll tell you about Muscle Beach Nutrition (as we hadn’t heard of them before either).

Who Are Muscle Beach Nutrition?

There’s a reason why you hadn’t heard of Muscle Beach Nutrition before; because they were only founded in late 2017.

So we’ll be a bit more lenient with this review – as everyone was inexperienced at some point (I mean, we were pretty terrible when we began working in the supplements industry over 20 years ago, and look at us now!).

However, we’ll still be giving you the hard truths about Pre-Train. Ultimately, we didn’t learn much about this company from their website – as their site is still under construction as we write this review.

Anyway, we’ll analyze what we know – and that’s the ingredients inside Pre-Train in the section below.

Muscle Beach Nutrition’s Pre-Train contains 10 main ingredients; this is a good number of ingredients (we usually find that products containing over 10 ingredients are always under-dosed and ineffective).

We’re glad that Pre-Train doesn’t contain any harmful ingredients such as Synephrine or Yohimbe. However, one thing we noticed was that this pre-workout contains a HUGE dosage of Caffeine per serving (300mg).

To put this into perspective; it’s recommended that you consume 400mg Caffeine overall per day. So consuming 300mg at one time is HUGE (this will lead to side effects such as jitters and energy crashes).

But there is another positive too – Pre-Train doesn’t contain any proprietary blends (meaning you can see the exact dosages of each ingredient).

Anyway, we’ll take you through each ingredient inside Pre-Train; so you can see how effective this pre-workout really is. 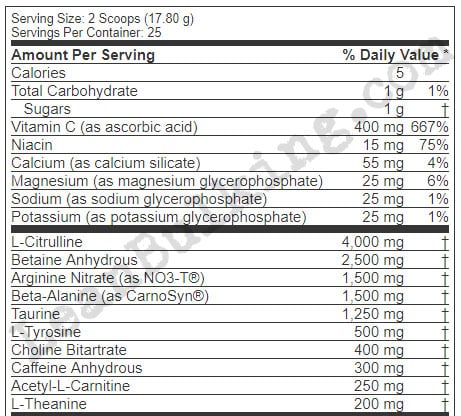 L-Citrulline is a great ingredient to have in a pre-workout supplement; it’s shown to enhance muscle pumps by increasing your blood flow.

It’s been dosed well with the full 2 scoop serving of Pre-Train (4,000mg). However, if you take just 1 scoop, then you won’t get an optimal dosage of L-Citrulline.

And we have 1 small criticism; we prefer Citrulline Malate, which is L-Citrulline mixed with Malic Acid.

Why? Answer: Citrulline Malate has shown to improve strength, as well as muscle pumps. If you’re looking for this ingredient, then its optimal dosage is 6,000mg per serving.

But as we mentioned, L-Citrulline is still a good addition to any pre-workout too.

While L-Citrulline is a good addition, Betaine is one of the worst ingredients you can find in supplements.

Why? Answer: Betaine hasn’t shown to offer any benefits in studies, but it’s reported to cause your breath and sweat to smell fishy.

For this reason, it’s a useless ingredient that causes a side effect…not what you want. In fact, the only positive is that Betaine isn’t part of a proprietary blend in Pre-Train.

If you’re wondering what Arginine Nitrate is; it’s simply a mixture of Arginine and Nitrate. In theory, this should be a great ingredient (as both play important roles in boosting your nitric oxide levels in your body).

However, Arginine has shown to have a poor absorption rate in studies (meaning it’s ineffective when orally supplemented). For this reason, Arginine Nitrate isn’t likely to work in Pre-Train.

Beta-Alanine is a molecule that’s shown to enhance muscular endurance. However, it’s also shown to cause a side effect called paresthesia.

What’s paresthesia? Well, it’s a tingling and itching sensation on the skin of your face and body. Personally, we find this very distracting when we’re lifting weights – so we try to avoid pre-workouts containing Beta-Alanine.

But we also realize some people don’t mind paresthesia; so we’ll never completely criticize a pre-workout only because it contains Beta-Alanine. Ultimately, it’s up to you whether this is a bad or good ingredient.

Taurine is an organic acid containing sulfur; it’s not bull urine like some people think. And it doesn’t raise your energy levels either.

Basically, studies have shown the only benefit Taurine offers is to reduce cramping. However, as this benefit can be achieved by keeping yourself hydrated – Taurine isn’t needed in pre-workout supplements.

We hate to criticize L-Tyrosine here, as it’s a key ingredient when added to Nootropic supplements. However, L-Tyrosine isn’t needed in pre-workout supplements because Caffeine offers enough energy boosts to improve your focus in the gym.

If you haven’t guessed; L-Tyrosine is a ‘brain booster’ that’s proven to raise your cognition.

Choline is very similar to Betaine; basically, its useless but causes your breath and sweat to smell fishy.

For this reason, this is another ingredient we avoid in pre-workout supplements. Ultiamtely, there’s no point suffering a side effect when there’s no benefits in return.

If you’re wondering what ‘anhydrous means’; it basically means that Caffeine has been hydrated into powder form (so it can be added to supplements).

Caffeine is a key pre-workout ingredient when dosed sensible (under 200mg per serving). In this safe dosage, it can improve your energy, strength, endurance and focus – which are all benefits that improve your gym session.

However, when overdosed, it can cause side effects such as jitters and energy crashes; as Pre-Train contains a HUGE 300mg per serving, Caffeine has been over-dosed here.

As we just mentioned, this puts you at risk of side effects.

This is a natural substance found in high amounts in avocado’s. So how is it useful in pre-workouts? Answer: it’s shown to reduce fatigue while increasing your focus in the gym – making L-Carnitine a key pre-workout ingredient.

Nothing wrong here, so well done to Muscle Beach Nutrition.

L-Theanine is a great addition to any pre-workout; it works in synergy with Caffeine to form a ‘smart caffeine’ (meaning it enhances the benefits of Caffeine in smaller dosages).

Usually, this means that companies can add smaller dosages of Caffeine. But as Pre-Train contains a HUGE 300mg serving, you can’t escape the risk of suffering from jitters and energy crashes here.

However, when consumed with a sensible dosage of Caffeine (under 200mg per serving), L-Theaning is a key pre-workout ingredient. 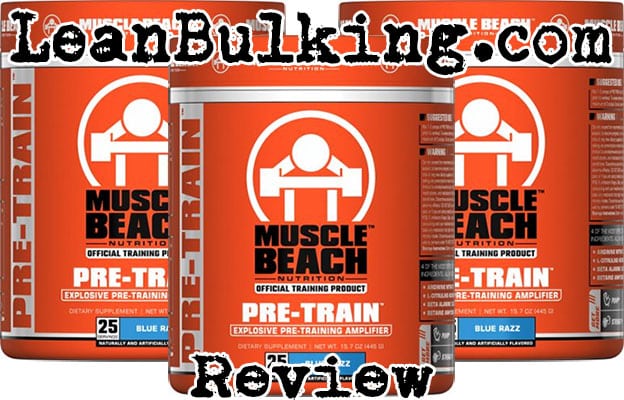 There are 4 things that can cause side effects in Pre-Train; Betaine, Beta-Alanine, Choline, and the HUGE 300mg dosage of Caffeine.

Considering that there are 10 ingredients in Pre-Train – this means that almost half of this pre-workouts ingredients can cause side effects…not good.

Anyway, we’ll give you a quick summary; Betaine & Choline can cause your breath and sweat to smell fishy, Beta-Alanine causes a side effect called paresthesia (tingling and itching on the skin of your face and body).

Finally, the HUGE 300mg Caffeine dosage is very likely to cause jitters and energy crashes. For this reason, we always recommend you to consume under 200mg Caffeine per serving in pre-workout supplements.

Here’s the potential side effects from taking Pre-Train:

Muscle Beach Nutrition are new to the supplements industry in 2017. So we hate to sound harsh here; but unfortunately, Pre-Train is nowhere near good enough to compete with the best pre-workouts on the market.

They’ve made a rookie error by over-dosing the Caffeine at 300mg per serving (which is almost certain to cause jitters and energy crashes). In fact, these are common side effects with pre-workouts due to this very reason.

As a result, we recommend that you choose pre-workout supplements containing under 200mg Caffeine per serving – to stay safe and get the most for your money.

However, there are some positives; Citrulline, L-Theanine & L-Carnine are key pre-workout ingredients, so Muscle Beach Nutrition has shown they’ve done some research here.

However, it has no chance of competing with the highest rated pre-workout supplements available.