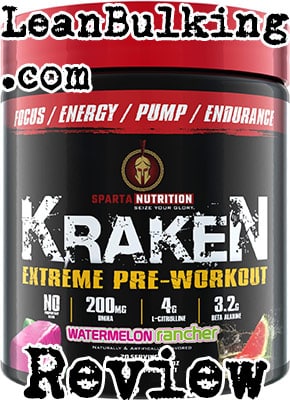 Kraken is marketed as an ‘extreme pre-workout’ by Sparta Nutrition. It comes in 40 (or 20) serving containers, depending on whether you decide to take 2 scoop servings.

Although we don’t have our hands on this pre-workout, we’ll be providing you with our honest opinion from an expert position; personally, we recommend taking 2 scoop servings, so you get better dosages of each ingredient inside.

Anyway, we’ll expand on this as we analyze Kraken pre-workout’s nutrient profile in the next section. But first, let’s find out more about the company behind it.

Who are Sparta Nutrition?

What is your profession? AROO AROO AROO…this is for those that have seen the great Spartan film, 300 (featuring Gerard Butler).

Anyway, we like the name of this company; Spartans were pretty bad*ss and put their mark on history, so you can see why modern companies would want to replicate their success in business.

Their ‘about us’ page wasn’t the most detailed, but it certainly offered an insight into their agenda’s etc. We just wish that they informed you which year they were founded too.

Apart from that, they offer fat burners and another pre-workout. But you’re here to learn more about Kraken pre-workout. So let’s see which ingredients are inside below…

Kraken pre-workout contains a good number of nutrients (10 overall); this is good, as we usually find that supplements containing over 10 ingredients have been underdosed.

Not only that, we’re very happy to see that none of the ingredients in Kraken pre-workout have been added to proprietary blends. This means that you can see the exact dosages of nutrients inside this pre-workout, which we believe to be essential in keeping you safe from side effects.

From first glance, everything seems good; there’s a good dosage of L-Citrulline and Caffeine when you consume 2 scoop servings, with generally no potentially harmful ingredients.

We’ll take you through each ingredient inside Kraken pre-workout. By the end of this review, you’ll know exactly how safe and effective this pre-workout really is. 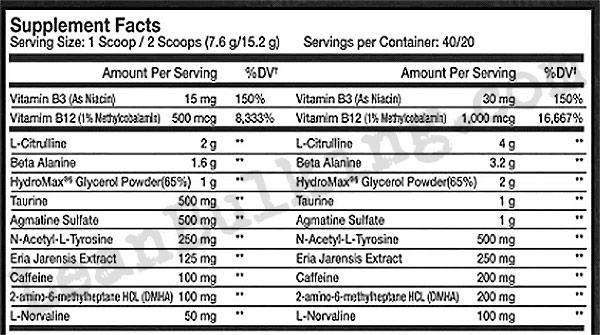 L-Citrulline is one of the best ingredients you can find in pre-workouts; it’s able to raise your nitric oxide levels, which increases your blood flow – enhancing your muscle pumps during exercise.

Muscle pumps are one of the best sensations you can experience in the gym (Arnold Schwarzenegger likened them to ‘orgasms’ in the legendary bodybuilding film, Pumping Iron).

For this reason, every time we look for a new pre-workout, we always check to see whether it contains L-Citrulline or Citrulline Malate; both of these nutrients have proven to work, as Citrulline Malate is basically L-Citrulline bound with Malic Acid (which enables it to raise your ATP levels like Creatine Monohydrate does).

In terms of the dosage, we believe that you get an optimal dosage with the 2 scoop serving. As a result, we’ll be analyzing Kraken pre-workout’s ingredients list with the 20 serving dosages of each ingredient in this review.

We always have mixed opinions about Beta-Alanine in pre-workout supplements; it’s shown to enhance your muscular endurance, but it’s also known to cause tingly and itchy skin (a side effect officially known as paresthesia).

One thing is for sure though – it works. So we’ll leave this up to personal preference, as you really have to try it before making your own decision on how bad paresthesia is.

Personally, we find paresthesia (itchy & tingly skin) to be distracting from our workouts, so we try to avoid pre-workouts containing Beta-Alanine. But again, we’ll repeat that this is simply our honest opinion, and we’ll leave the verdict to personal choice.

This is basically a patented form of Glycerol. It’s believed to help keep you hydrated, which is definitely beneficial during your workout.

While we don’t think it’s a key addition to any supplement, HydroMax can certainly be considered as a useful ‘bonus’ to have in Kraken pre-workout.

Taurine is another ingredient that we would consider to be a ‘bonus’ in supplements; it’s shown to reduce cramping, but this can be achieved by simply keeping yourself hydrated at all times.

But ultimately, there’s no denying that Taurine is a useful addition to Kraken pre-workout.

Agmatine Sulfate is a compound found in L-Arginine. However, we personally don’t believe that L-Arginine is very effective in supplements, due to having a poor absorption rate in studies.

Basically, Agmatine Sulfate is believed to raise your nitric oxide levels, and increase tolerance to pain too. While it might not be effective, as Kraken pre-workout already contains L-Citrulline, this isn’t an issue here.

The good news is that Agmatine Sulfate hasn’t shown to cause any side effects, so there’s nothing bad about having this ingredient in Kraken pre-workout either.

L-Tyrosine is a ‘brain booster’ ingredient that’s proven to enhance your cognition. This is why we consider it to be a key addition to nootropic supplements.

As a raise in focus can help you get more done in the gym, we do believe that L-Tyrosine useful in Kraken pre-workout too though.

But we will note that Caffeine Anhydrous offers enough of a boost in focus to benefit your gym session; L-Tyrosine is a-bit overkill for this job, and is more aimed at improving your memory (which can be helpful if you forget your wife’s shopping list on your way back home!).

Ultimately, there’s nothing bad about having L-Tyrosine here, and it’s actually very beneficial at improving your cognition. But we don’t consider it to be as useful as L-Citrulline, or even Beta-Alanine at enhancing your performance in the gym.

We don’t actually know much about Eria Jarensis, as there hasn’t been many studies conducted on it yet. However, it’s believed to be a stimulant that’s able to make you more alert and improve your mood too.

But the bad news is that Eria Jarensis is considered to be potentially harmful by some professionals. So personally, we’re going to avoid Eria Jarensis until we see more evidence that it’s safe and effective.

Now, this is one of the best ingredients in Kraken pre-workout; everyone knows that Caffeine raises your energy levels and that it works.

In case you’re wondering what ‘anhydrous’ means, it basically signals that Caffeine has been dehydrated into powder form so it can be added into supplements – this also makes Caffeine Anhydrous the purest form of this stimulant too.

We’re glad that Kraken pre-workout haven’t hidden Caffeine Anhydrous in any proprietary blends; this means you can see exactly how much you’ll be consuming, which is essential at keeping you safe from jittery side effects.

Also known as 2-Aminoisoheptane, DMHA is another stimulant that’s believed to raise your energy levels and mood. But it’s also known for its ability to promote fat loss too.

But the bad news is that it’s banned from use in competitive sports; while this isn’t a bad thing for the regular gym-goer, we recommend checking to see whether it’s allowed in your sport before taking it, if you’re a competitive athlete.

You can learn more about DMHA in our detailed page here.

L-Norvaline is a nutrient that’s believed to raise your nitric oxide levels.

However, while there aren’t many studies that prove that it’s effective, this isn’t an issue due to Kraken pre-workout already containing an optimal dosage of L-Citrulline (which is proven to get the job done). 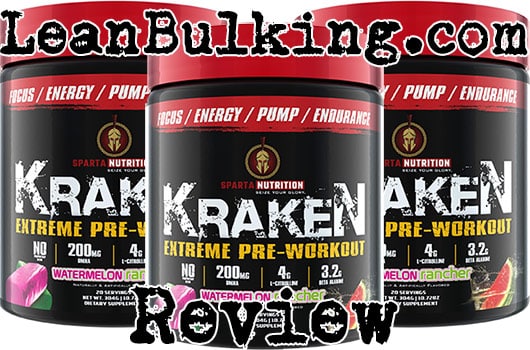 In terms of side effects Kraken pre-workout should be generally quite safe. But DMHA is believed to cause some side effects associated with high dosages of stimulants, such as jitters and energy crashes.

Eria Jarensis is another ingredient that isn’t 100% proven to be safe from side effects – but it’s also not proven to cause side effects either. So for the purposes of this review, we’re willing to give Sparta Nutrition the benefit of the doubt here.

Here’s the potential side effects from taking Kraken pre-workout:

All-in-all, Kraken pre-workout seems to be a respectable supplement; nothing is hidden in any proprietary blends, which we’re very happy to see.

Also, we’re happy that Sparta Nutrition have added an optimal dosage of L-Citrulline, so you’ll be sure to experience great muscle pumps in the gym.

But as we’ve mentioned, overall, Kraken pre-workout puts up a fight in the market.

But it’s missing that extra ‘kick’ to compete with the highest rated pre-workouts on the market.