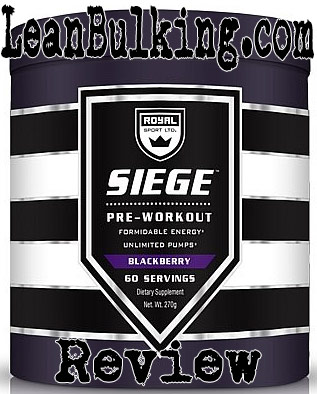 Siege is a pre-workout supplement by Royal Sport Ltd. It costs $51.99 for 60 serving containers, and comes in 3 flavors – Fruit Punch, Blackberry, and Raspberry Lemonade.

It comes in quite fancy packaging, but the most important thing is whether Siege contains great ingredients or not. We’ll take a look after analyzing the company behind this pre-workout.

Who are Royal Sport Ltd?

When looking for this company’s website, we found that it wasn’t working (it came across with a ‘404’ sign). However, we looked on their Facebook page and found that Royal Sport Ltd were founded in 2013.

Royal Sport Ltd are a supplements company that are exclusively available on GNC (meaning their products aren’t sold anywhere else, such as bodybuilding.com). We couldn’t find much more information about them, so let’s take a look at what’s inside Siege pre-workout…

Siege pre-workout contains 9 main ingredients, but straight away we noticed something we don’t like – this product contains 2 proprietary blends.

Basically, proprietary blends are mixtures of numerous ingredients that’re shown to you as 1 quantity – for example, the overall amount of the ‘Pump Matrix’ blend is 1.5g (1,500mg) – but no-one knows the dosage of the ingredients inside.

This increases your risk of suffering from side effects; simply put, stimulants such as Caffeine & Bitter Orange Extract can be harmful in large dosages. We’ll explain this more below. 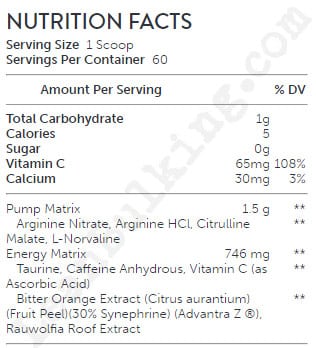 This is simply a mixture of L-Arginine and Nitrate. It sounds good, but studies have shown that’s this ingredient doesn’t work – L-Arginine has a poor absorption rate, meaning it’s ineffective when orally supplemented.

This is why we prefer pre-workouts to contain Citrulline Malate instead (as it converts into L-Arginine in your kidneys, taking away the problem of L-Arginine’s poor absorption rate (we’ll expand on this soon).

Simply put, this is ineffective for the same reason as Arginine Nitrate – L-Arginine has a poor absorption rate, so any ingredient that contains it, won’t work.

Another ineffective ingredient inside Siege pre-workout.

This is a great addition to any pre-workout, and it’s one of our favorite ingredients in these products. We mentioned that L-Arginine has a poor absorption rate – well, Citrulline Malate gets around this problem by converting into L-Arginine in your kidneys (which encourages more blood to rush to your muscles, resulting in enhanced muscle pumps while you lift weights).

As Citrulline Malate has a great absorption rate, studies have proven that it works in dosages between 6,000mg-8,000mg. However, it’s inside a proprietary blend, no-one knows whether it’s in an optimal dosage (making it unreliable in Siege pre-workout).

For this reason, we recommend you to avoid any supplements containing proprietary blends – and look for a pre-workout containing Citrulline Malate in dosages of at least 6,000mg.

L-Norvaline is believed to enhance your muscle pumps while you exercise – but no study has shown that it actually works (making it unreliable).

It’s often found in pre-workout supplements, as many mistakenly believe that it boosts energy as it’s found in energy drinks like Red Bull – but studies have shown that this isn’t true.

Taurine isn’t a bad ingredient, but it’s not really needed – we would’ve preferred to see L-Carnitine here instead, as it’s shown to reduce fatigue and boost your focus in the gym.

Caffeine is one of our favorite pre-workout ingredients, as everyone knows it benefits you almost immediately – boosting your energy levels and focus in the gym.

Studies have proven that it works, but there’s one problem with Siege pre-workout – Caffeine is in a proprietary blend, meaning you don’t know how much is inside.

This is a problem, as Caffeine in dosages over 200mg per serving can cause jitters and energy crashes (side effects that will ruin your workout). This is another example of why proprietary blends are bad.

This isn’t a main ingredient in any pre-workout (we prefer to have this in a multi-vitamin), but everyone knows it improves your general health. The problem is, Vitamin C might be filling this whole blend without you knowing, which would make it useless.

Ultimately, you want ingredients that’ll improve your workout – and Vitamin C won’t do that directly.

We’ve personally had bad experiences with Synephrine before, so we avoid any supplement that contains this ingredient – and we recommend you to do the same. For this reason, we stopped taking Siege pre-workout after trying 2 servings.

Like Synephrine, we also avoid Rauwolfia too – it’s caused us bad side effects in the past, and many others have also reported side effects after consuming Rauwolfia too. Basically, companies often add this into their pre-workout to make it seem ‘stronger’ – in people’s minds, things that have been banned somewhere are more ‘hardcore’, and this is a gimmick that Royal Sport has added into Siege pre-workout.

However, we prefer to stay safe and consume 100% natural ingredients that’ve shown to enhance your gym session (without causing any side effects). That means Rauwolfia is high up on our list to ‘avoid’. 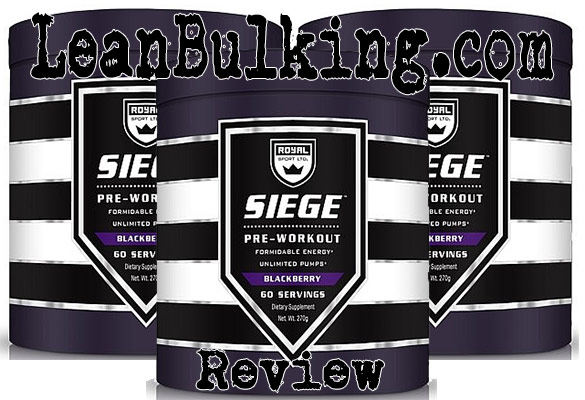 See Your Best Options In Our
– Top Rated Pre-Workout Page –

There are 2 main problems with Siege pre-workout  – Bitter Orange Extract and Rauwolfia (which have both been banned in numerous countries, due to being harmful). We always warn you to against supplements containing these ingredients – why would you pay for a supplement that makes you feel like sh*t?

But that’s not the only issue; as Caffeine is part of a proprietary blend, there may be a dosage larger than 200mg per serving in Siege pre-workout (meaning you have high risk of suffering from jitters and energy crashes).

As we’ve mentioned, this is a clear example of why you should avoid supplements containing proprietary blends – it’s better to know exactly what you’re putting into your body, in the exact dosages (so you know whether it’s 100& safe or not).

Here’s the potential side effects from taking Siege Pre-Workout:

There are 2 key pre-workout ingredients in Siege Pre-Workout – Citrulline Malate and Caffeine. But even these might be ineffective, as they’re part of proprietary blends (meaning you don’t know the exact dosage of them inside).

Simply put, if a company spent the cash to dose their ingredients optimally, they wouldn’t hide them in these blends – companies hide their ingredients in proprietary blends when they want to cut costs and keep their prices high. But obviously this is bad for you as the customer as it means you’re not getting the best deal (we’ve been in the supplements industry for 20 years, so we know this).

For this reason, we recommend that you avoid any supplement containing proprietary blends – knowing the exact dosage of each ingredient allows you to see how effective and safe a supplement really is (and most importantly, you can make sure you’re getting the best value for money).

The main thing that we personally dislike about Royal Sport LTD’s Siege pre-workout, is that it contains an unknown quantity of Caffeine Anhydrous (which increases your risk of jittery side effects, in our honest opinion).

As a result, we believe there are many better pre-workouts than Siege pre-workout for you to choose from.