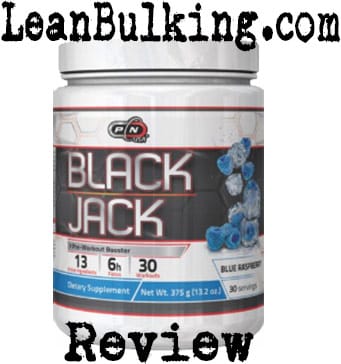 Black Jack is a pre-workout made by Pure Nutrition. It costs $28.99 for 30 servings and comes in 3 flavors – Blue Raspberry, Fruit Punch, and Watermelon.

Who are Pure Nutrition?

Pure Nutrition are a supplements company that were founded in 2011. They market a range of products, like this pre-workout supplement to whey protein.

Let’s see whether Black Jack can put them on the map.

Black Jack contains 13 different ingredients, which is quite a lot for a pre-workout supplement. We prefer a product having less ingredients, but are proven to work.

While Black Jack by Pure Nutrition contains some of our favorite pre-workout ingredients – Caffeine, Creatine Monohydrate, Citrulline Malate, and L-Theanine.

However, all of these ingredients have been dosed incorrectly – for example, Citrulline Malate’s optimal dosage is 6,000mg, but Black Jack only contains 500mg.

We’ll expand on this below, so take a look. 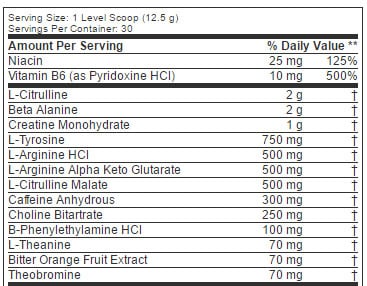 This is a great ingredient that can enhance your muscle pumps. However, Citrulline’s optimal dosage is 3,000mg per serving – Black Jack only contains 2,000mg, so it might not have any effect here.

This is simply a mixture of L-Citrulline and Malic Acid – but it’s more beneficial than just Citrulline on it’s own.

But there’s a problem: it’s been seriously under-dosed at 500mg. Citrulline Malate’s optimal dosage is 6,000mg, so this definitely won’t have any effect on you.

One of our favorite ingredients in a pre-workout, as it’s proven to improve your strength and endurance. No problems with this ingredient – good job by Pure Nutrition here.

L-Tyrosine can improve your focus, but doesn’t offer any other benefits in the gym.

We’d prefer to swap this with L-Carnitine, which reduces your fatigue and muscle damage while also boosting focus.

These are both forms of Arginine, which is believed to enhance your muscle pumps by increasing your nitric oxide levels.

However, Arginine’s shown to be ineffective when orally supplemented – due to it’s poor absorption rate.

For this reason, these 2 ingredients aren’t likely to benefit your gym session.

Caffeine is the best stimulant you can get in a pre-workout. It’s reliable and safe – but only when consumed in dosages under 200mg per serving.

Basically, taking a large dosage of Caffeine (over 200mg) can result in jitters or energy crashes. You’ll have experienced this if you’ve ever drank too much coffee in a short period of time before.

For this reason, we believe the sweet spot is a caffeine serving between 150mg-200mg. Black Jack contains 300mg per serving, meaning it’s likely to cause you jitters and energy crashes.

This is the worst ingredient inside Black Jack. Studies have shown that it offers no benefits, but causes fishy odors in your breath and sweat.

This is the molecule in your brain that regulates serotonin, which makes you feel happier. However, studies have shown that it’s ineffective when orally supplemented  – due to being rapidly broken down into inactive components.

Simply put, it doesn’t work when consumed in a supplement.

When consumed with caffene, L-Theanine works in synergy to form a ‘smart-caffeine’ – this enhances the benefits of caffeine, making it more effective in smaller dosages.

But as we’ve mentioned, Black Jack contains a large dosage of Caffeine; so L-Theanine won’t do much to benefit you here.

Also known as Synephrine, this has been banned in numerous countries for causing harmful side effects. It’s main benefit is promoting fat loss, but this isn’t a direct benefit of a pre-workout anyway.

For this reason, we recommend that you stay away from Bitter Orange Fruit Extract to stay safe – and avoid side effects.

Theobromine is the stimulant found in Cocao beans. However, it’s not as reliable as caffeine, and a safe dosage of Theobromine isn’t known yet as it’s not been studied much. 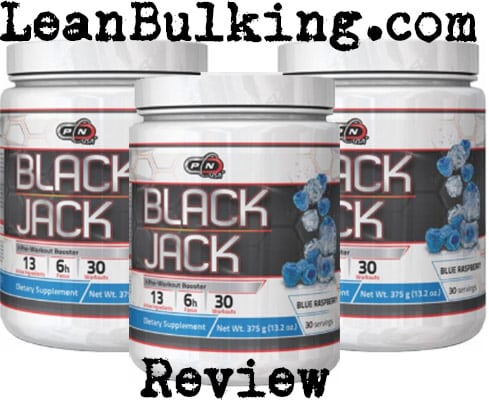 Black Jack contains some potentially harmful ingredients, and also ingredients that have been over-dosed – both of which increase the risk of you experiencing side effects.

Bitter Orange Fruit Extract (Synephrine) is an ingredient you should stay way from – it’s been banned in numerous countries for causing worrying side effects.

We also recommend only consuming 150-200mg Caffeine per serving, to avoid jitters and energy crashes; unfortunately, Black Jack contains 300mg, which is a large dosage.

Here’s the potential side effects from taking Black Jack:

As you can see from the list of possible side effects, we don’t recommend that you choose Black Jack as your pre-workout supplement. Always choose the supplements with the lowest risk of side effects – to stay safe and enjoy benefits instead of having your gym session ruined by side effects.

However, it’s not the worst pre-workout we’ve seen; Black Jack contains some great ingredients, so it’s a shame that Pure Nutrition chose to add the negative ingredients too.

For this reason, we’re giving Black Jack a 3 star rating. We believe that there are at least 3 better pre-workouts available for you to try.