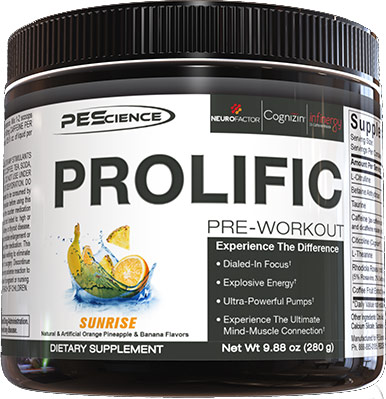 Prolific is a pre-workout supplement marketed by PEScience. This is the new, updated version released in 2017 – it’ll replace the older version with the same name that was released in 2015.

PEScience pride themselves on the quality of their products, with their mission being “to slowly and properly formulate each product”. One thing we like, is that all of their supplements are made in cGMP approved facilities, so they’ll be made to a high standard.

However, a supplements ingredients, and their dosages, are what make a product effective or a waste of time.

From simply looking at Prolific’s ingredient list, it looks like a respectable product. We especially like that PEScience added an optimal dose of L-Citrulline (6,000mg) – something many other companies forget to do.

Another great point, is that Profilic doesn’t contain any proprietary blends, so you know exactly what you’re getting – it also allows us to properly give you an in-depth analysis of this product.

Here’s everything you need to know: 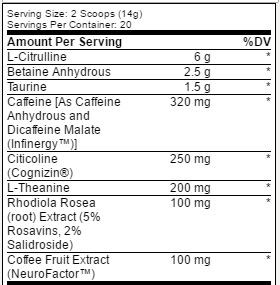 This is a key pre workout ingredient, and can enhance your muscle pumps in the gym.

How? Well, it turns into nitric oxide in your kidneys, which widens your blood vessels (vasodilation). This increases blood flow, resulting in better muscle pumps while you lift weights.

This is an organic acid containing sulfur. It’s often mistakenly believed to boost energy, due to it being in many energy drinks.

Unfortunately, it hasn’t shown to affect your energy levels in any studies conducted on it.

It does offer one benefit though – it can reduce cramping. But this isn’t what we consider to be a key benefit of a pre workout supplement.

This is one of the best pre workout ingredients when it’s dosed correctly. If Caffeine’s dosed too highly in a product, it can cause unwanted side effects like jitters and energy crashes.

PEScience have made a mistake here – Prolific contains a huge 320mg per serving of Caffeine, which is a very large dose.

If you’re sensitive to Caffeine, you’ll suffer from its side effects. But we’re still giving it 4 stars, as we hate to criticize a great nutrient.

We recommend searching for a pre workout containing 150-200 Caffeine, so you experience all its benefits without any side effects.

Also known as CDP-Choline, it’s shown to improve memory. However, it offers no other benefits to enhance your gym session, meaning it’s an ineffective ingredient in Prolific.

L-Theanine is a very useful ingredient, especially when its consumed alongside Caffeine. Why? Because it enhances the benefits of caffeine without increasing the risks of side effects, forming a ‘smart-caffeine’.

However, as we’ve mentioned, Caffeine has been dosed too highly, meaning you’ll still be at risk of experiencing jitters or energy crashes.

We recommend looking for a pre workout containing L-Theanine, alongside an optimal dose of Caffeine.

This herb’s been used for centuries in traditional Chinese medicine, and in Scandinavia.

Here’s why: it’s shown to significantly reduce fatigue, while improving mental function (focus and reaction time) – these are great benefits to your gym session.

For this reason, it’s a key pre workout ingredient. We recommend looking out for this ingredient, on your search for a quality product.

Also known as coffee cherries or coffee berries, it’s believed to be a powerful anti-oxidant and have a positive effect on cognition (alertness and memory).

However, it doesn’t offer any benefits to improve your training session – meaning it’s an ineffective ingredient in a pre workout supplement. 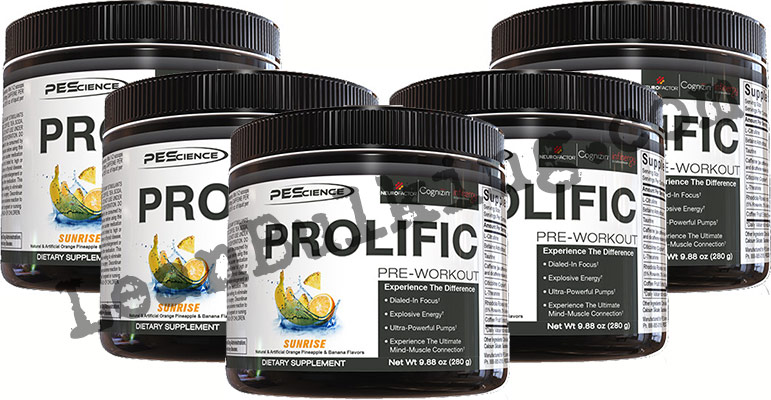 There isn’t any ingredient that consistantly cause side effects in Prolific. However, PEScience has dosed Caffeine very highly – meaning there’s an increased risk of experiencing its side effects, especially if you’re sensitive to it.

Here’s the potential side effects from using Prolific:

We recommend looking for a pre workout containing 150-200mg Caffeine per serving, to avoid any risks of side effects.

It’s a shame that PEScience over-dosed the Caffeine in Prolific. If it hadn’t, it would’ve received a high score.

It’s still a respectable product, as it contains numerous key pre workout ingredients. But it’s not the best we’ve seen on the market.