SST CUTS is a fat burner supplement made by Performix. It costs $69.99 for 20 serving containers, which makes this one of the more expensive products on the market (usually fat burners come with 30 servings for a lower price).

But one thing that we are happy with, is that Performix have offered the optimal 4 capsule servings daily with SST CUTS; this has shown to keep your body fuelled in fat burning mode throughout the day, so great job here.

We’re also happy to see that Performix has added a key fat burning nutrient, Capsaicin, along with a sensible dosage of Caffeine Anhydrous. These ingredients should boost your metabolism and raise your energy levels while you cut weight, if they’ve been dosed correctly.

We’ll take a closer look at SST CUTS’ ingredients in the next section. First, we’ll tell you more about the company behind it.

Performix have been around for a respectable amount of time now, and they’ve really marketed themselves as a premium supplements company; you can see this by looking at the prices of their products (some of the highest priced supps on the market).

We believe that they’re based in the USA, although they don’t have a dedicated ‘about us’ page on their website to confirm this.

One bad thing that we noticed Performix do (in our honest opinion), is that they add many proprietary blends in their products. This means that you don’t know the dosages of individual nutrients in their supplements usually.

However, we’re glad to see that they haven’t made this mistake with SST CUTS. So let’s see which ingredients have been added to this fat burner below…

Performix SST CUTS contains 8 ingredients overall, which is a great number to have in a fat burner; we usually find that products containing more than 10 are often under-dosed, so this gives SST CUTS a great chance of being dosed correctly.

From first glance, we’re mainly happy with what we see. We’re especially glad that Performix has dosed the Caffeine Anhydrous sensibly in SST CUTS, so you’ll be safe from jitters here.

However, we are slightly disappointed that Performix have left out some key fat burning nutrients such as Green Tea Extract.

Anyway, we’ll explain this in more detail as we take you through each ingredient in Performix SST CUTS. By the end of this review, you’ll have a good idea of how safe and effective this fat burner really is. 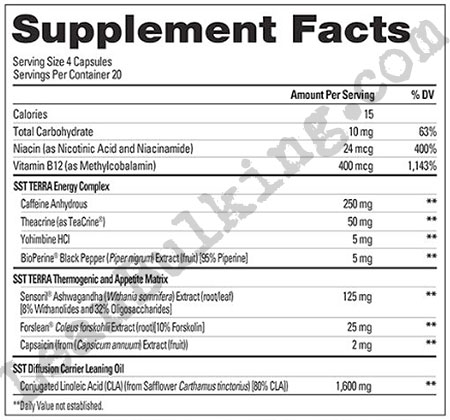 As we’ve mentioned, Performix SST CUTS contains a sensible dosage of Caffeine Anhydrous. This means that it’ll give you enough to keep your energy levels high, but not too much to cause jittery side effects.

So great job by Performix here.

Why would you want Caffeine in a fat burner? Well, think about when you cut your calories; you feel tired, moody and demotivated. Caffeine Anhydrous helps combat this and you feeling more focused to lose body fat.

For this reason, we consider Caffeine Anhydrous to be a key player when added in sensible amounts to fat burner supplements.

Basically, Theacrine is believed to offer very similar effects to Caffeine, so this increases your risk of suffering from jitters and energy crashes (especially if you’re sensitive to stimulants and don’t drink coffee often).

Ultimately, this is why we personally prefer fat burners that only contain 1 stimulant. But in fairness to Performix, they haven’t gone overboard and only added a small 50mg dosage of Theacrine here.

So if you have a high tolerance to stimulants and consume coffee very regularily, you should still be fine here.

We’ll start by explaining why this is added to fat burners; Yohimbine has shown to help you lose fat by increasing your adrenaline levels in your body (leading to faster heartbeat etc).

However, this is also why Yohimbine is regularily reported to cause side effects. And it’s exactly why we personally prefer to avoid this ingredient.

Ulimately, this is exactly why Yohimbine has been banned in countries such as the UK. As there are many safe and effective thermogenics available (such as Green Tea Extract), there’s simply no need to risk your health by consuming Yohimbine.

For this reason, we usually advise you to avoid supplements containing this ingredient – to stay safe, in our honest opinion.

In case you’re wondering what this is, it’s basically Black Pepper Extract; this contains piperine, which improves the bioavailability of ingredients its consumed with (meaning it enhances the absorption rate of nutrients and your digestion too).

Also, yes, this is exactly the same black pepper that you use to sprinkle onto your food. But now you know that it’s more useful than to simply add to your meals.

Basically, this is why we consider Black Pepper Extract to be a useful ‘bonus’ addition to fat burners. However, it’s not going to be a key addition to any supplement on its own.

Ashwagandha is a herb that’s been used in auyrveda (traditional Indian medicine) for decades. It was once thought to help improve your testosterone levels, but modern research has shown that it’s unable to deliver this benefit.

So what does it do? Well, the same studies have shown that Ashwagandha can help enhance your power output, which can come in handy in the gym.

Now, the bad news is that studies show that you need to consume at least 300mg Ashwagandha for it to work. But as there’s only 125mg in Performix SST CUTS, this under-dosed amount isn’t likely to work.

Coleus Forskohli is one very interesting ingredient. It’s only started being added to supplements over the past couple of years, and research is still on-going to determine how reliable it is.

So what is it supposed to do? Well, Coleus Forskohlii is believed to raise your testosterone levels and promote fat loss.

Sounds slightly too good to be true, especially as it’s not 100% proven yet. So we can’t consider this to be reliable until we see more evidence in the future.

However, if it is proven to be effective, then it’ll be one hell of an ingredient – perhaps good enough on its own to justify most supplements!

Capsaicin is a compound that’s found in chilli peppers, and is responsible for their ‘spice’. This makes it capable of raising your body temperature, which is the reason why it’s considered a ‘thermogenic’ nutrient.

For this reason, we’re happy to consider Capsaicin as a key addition to Performix SST CUTS here.

Also known as Conjugated Linoleic Acid, this is one of the better known ingredients that are added to fat burners. It’s gained media attention in the past, and with fatty acids becoming more popular in diets, CLA will keep gaining popularity.

However, the bad news is that CLA hasn’t proven itself to be a very reliable fat burner ingredient; studies have shown varying results with some negative ones, but some still consider CLA to be effective at helping to preserve muscle mass while you lose weight.

For this reason, while CLA might not help you lose body fat, it can still be a useful ‘bonus’ addition to a fat burner supplement. Although we would have much preferred a key fat burning nutrient such as Green Tea Extract instead here. 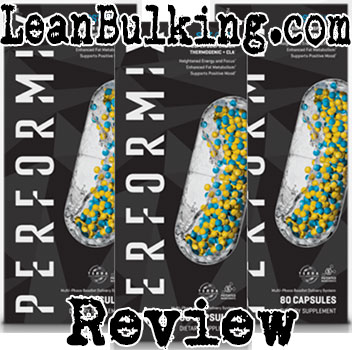 The main concern we have with Performix SST CUTS, is that it contains Yohimbine; as we’ve mentioned, this has been commonly reported to cause numerous side effects.

But one other potential issue is that Performix SST CUTS also contains more than 1 stimulant. This means that those sensitive to stimulants are at increased risk from suffering jitters and energy crashes.

For these reasons, we personally prefer to avoid products containing Yohimbine and more than a sensible dosage of Caffeine Anhydrous.

Here’s the potential side effects from taking Performix SST CUTS:

You can see that Performix has made a big effort to create an effect fat burner supplement with Performix SST CUTS. For the most part, it’s a very respectable product, but as we’ve mentioned, there are some concerns (such as the addition of Yohimbine).

However, there are also many positives too; this includes the inclusion of a sensible dosage of Caffeine Anhydrous and Capsaicin, which has shown to be a great thermogenic capable of boosting your metabolic rate.

We also praise Performix for not hiding any ingredients in proprietary blends with Performix SST CUTS.

Although Performix SST CUTS is a respectable fat burner, the few issues mean that it can’t compete with the highest rated fat burners at a similar price.