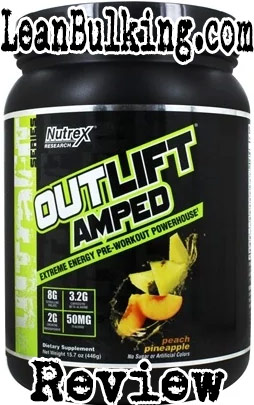 Outlift AMPED is a pre-workout supplement made by Nutrex. It costs $49.99 for 20 servings and comes in 2 flavors – Fruit Candy or Peach Pineapple.

These flavors sounded pretty interesting, but we decided to go for the Fruit Candy (this seemed to be the product’s ‘main’ flavor). In all honesty, it didn’t taste bad – but it also wasn’t the best tasting pre-workout we’ve ever had. Does the job, but its’t really enjoyable to drink.

Anyway, we’ll tell you about the company behind Outlift AMPED, before analyzing the ingredients inside in the next section.

Officially called Nutrex Research; this company was founded in 2002 and is a USA-based company in Oviedo, Florida.

However, we didn’t find out much more about Nutrex on their ‘about us’ section on their website. But one thing we do know – is what ingredients are inside.

So let’s take a look below…

Not only that, we’ve spotted a potentially harmful ingredients – Rauwolscine…but on the other hand, it contains an optimal amount of one of our favorite pre-workout ingredients (Citrulline Malate).

So you can see why we have mixed opinions with Outlift AMPED. We’ll analyze each ingredient, so you can make up your own mind about this pre-workout below. 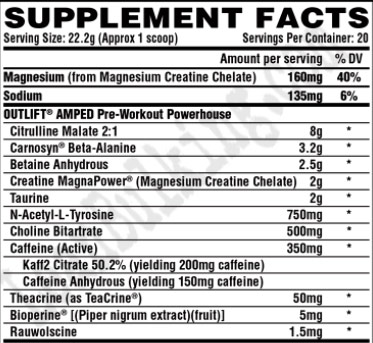 As we’ve mentioned, this is one of our favorite ingredients in pre-workout supplements. Simply put, it’s shown to enhance muscle pumps in the gym (by allowing more blood to rush into your muscles).

Everyone knows how good being pumped in the gym feels; and as Nutrex has dosed Citrulline Malate optimally (at least 6,000mg per serving), you’ll be sure to experience this benefit.

Personally, this is one of the ingredients that is essential when choosing a pre-workout supplement. Good job by Nutrex.

This is probably the most controversial ingredient in the supplements industry – it always causes a split in opinions.

Why? Because it can enhance muscular endurance, but it can also cause a side effect called paresthesia.

What’s paresthesia? Well, it’s a tingling and itching feeling on the skin of your face and body – something that can distract you from your workout in the gym.

For this reason, we choose to avoid pre-workouts containing paresthesia (as do many people who don’t like itchy skin). But we do acknowledge that some like Beta-Alanine – which is why we’ve included it as part of Outlift AMPED ‘pro’s’ list in this review.

So what side effect does Betaine cause? The answer: fishy odors in your breath and sweat.

For this reason, we try to avoid pre-workouts that contain Betaine; it shows that the company haven’t done enough research when formulating their products.

Creatine Magnapower is advertised as ‘one of the most advanced creatine ever created in science labs’ – but we’re not convinced.

Why? Because no study has shown that Creatine Magnapower is more beneficial than other forms (or even works).

The fact is, we know that Creatine Monohydrate works, as it’s been used by athletes and bodybuilders since the 1980’s. So we don’t know why companies try to fix something that’s not broken.

We prefer pre-workouts containing Creatine Monohydrate instead of other unproven forms of creatine. Ultimately, you want to choose tried-and-tested ingredients – instead of those like Creatine Magnapower which is unproven.

The only benefit Taurine provides is that it can reduce cramping. However, this same benefit can be achieved when consuming enough water – so Taurine isn’t necessary in pre-workout supplements.

However, Taurine isn’t the worst ingredient in Outlift AMPED, as it hasn’t been reported to cause any side effects.

L-Tyrosine is ‘brain-booster’ that’s shown to improve cognition. However, it hasn’t shown to offer any other benefits to improve your gym session.

Ultimately, as Outlift AMPED contains Caffeine, which offers improved focus in the gym – L-Tyrosine isn’t needed here. But L-Tyrosine is an important ingredient inside Nootropic supplements.

We don’t like Choline for exactly the same reasons we don’t like Betaine; Choline has also shown to cause fishy smells in your breath and sweat, without offering any improvements to your gym session.

Caffeine is a key ingredient in any pre-workout, and is the best stimulant you can find in these supplements. Basically, it’s shown to improve your strength, endurance, energy and focus in the gym.

However, you need to make sure to consume under 200mg per serving in pre-workouts (in order to avoid side effects such as jitters and energy crashes).

As Outlift AMPED contains an overall Caffeine dosage of 350mg, this puts you at risk of suffering from these side effects. For this reason, we only recommend consuming pre-workouts containing under 200mg Caffeine per serving.

Theacrine is another stimulant that’s believed to offer similar benefits to Caffeine. However, it’s not been proven to be safe or effective in any studies – making it an unreliable ingredient.

We always put you (our readers) safety first when writing these reviews. So we can’t recommend that you consume a pre-workout containing Theacrine, knowing it might cause side effects.

For this reason, we’ll be keeping an eye out for further studies on Theacrine. But for now, it’s an ingredient we’ll be staying away from.

This is basically Black Pepper Extract that’s been branded. It’s a good bonus ingredient, as it can improve the absorption rate of other ingredients it’s consumed with.

However, it doesn’t directly benefit your gym session – which is why we call it a ‘bonus’ ingredient.

This molecule is one of the ingredients we always avoid in pre-workout supplements. It’s known for causing unwanted side effects and has been banned in numerous countries such as the UK.

For this reason, we recommend you to stay away from pre-workouts containing Rauwolscine – to stay safe from potentially harmful side effects. 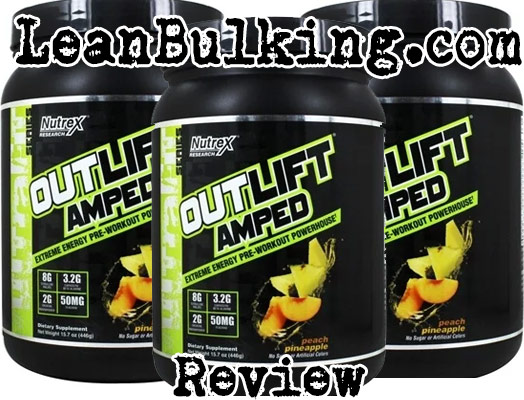 There are 5 things that can cause side effects in Outlift AMPED; Beta-Alanine, Betaine, Choline, Rauwolscine & and the overload of stimulants.

Simply put, Beta-Alanine causes a side effect called paresthesia (which is a tingling and itching sensation on your face and body). Betaine & Choline both cause your breath and sweat to smell fishy, Rauwolscine causes numerous side effects – while over 300mg per serving Caffeine causes jitters and energy crashes.

This is exactly why we recommend you to consume under 200mg Caffeine per serving (to stay safe from side effects while enjoying its benefits).

Here’s the potential side effects from taking Outlift AMPED:

You can see why we’re not recommending Outlift AMPED after seeing the list of potential side effects it can cause. Simply put, it’s missing key pre-workout ingredients and only contains 1 ingredient that’s been dosed properly and proven to work – Citrulline Malate.

The biggest mistake made by Nutrex was adding an overload of Caffeine, which causes the most common side effect caused by pre-workouts – jitters and energy crashes. For this reason, we recommend choosing a pre-workout containing under 200mg Caffeine per serving.

Outlift AMPED contains numerous ineffective ingredients that are reported to cause numerous side effects – and only 1 ingredient that actually works (Citrulline Malate).

For this reason, you should look for better options, to not waste your cash.