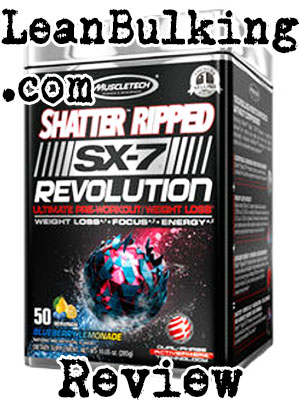 Shatter Ripped SX-7 Revolution is a pre-workout supplement also designed to promote fat loss, made by MuscleTech. It costs $79.99 on GNC.com for 50 servings, and comes in 2 flavors – Blueberry Lemonade and Rainbow Fruit Blast.

It’s interesting, as we don’t see the point in a pre-workout designed to promote fat loss; there are already specialist fat burner supplements available, so take a look at those if your main goal is to get abs.

Anyway, we’ll tell you more about MuscleTech – before analyzing Shatter Ripped SX-7 Revolution’s nutrient profile in the next section.

If you’ve known about supplements, then you’ll most likely be familiar with MuscleTech; they’re a massive company that was founded in 1996, so they’ve been around for a while too.

In fact, MuscleTech are well-known for their series of fat burners, so we’re not sure why they’ve tried to create a ‘hybrid’ supplement with Shatter Ripped SX-7 Revolution here.

Let’s see whether the nutrients inside prove whether it’s worth the big $79.99 price tag below…

Shatter Ripped SX-7 Revolution contains 12 ingredients overall; this is an unnecessary amount of ingredients to have in 1 product.

From experience, we find that most supplements containing over 10 nutrients have often been under-dosed. And from first glance, we can see that this is a problem here (especially with the Citrulline).

Anyway, we’ll take you through each ingredient inside Shatter Ripped SX-7 Revolution – to show you how effective this pre-workout/fat burner really is. 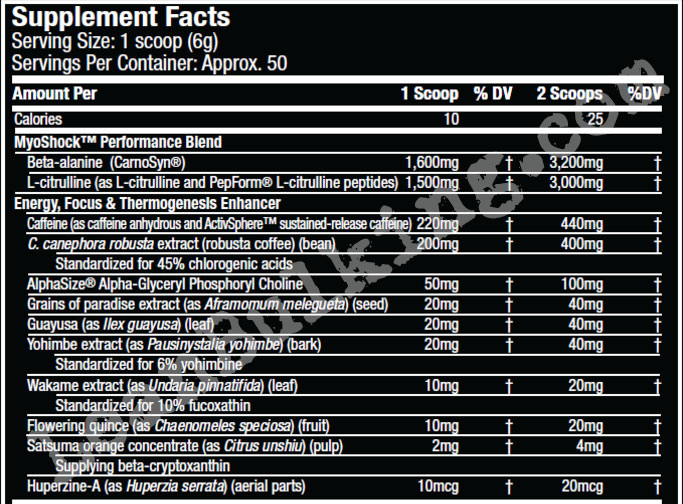 We always have mixed opinions about this ingredient; Beta-Alanine has shown to improve your muscular endurance. But it’s also known for causing a side effect called paresthesia.

What’s paresthesia? Well, it’s a tingling and itching sensation on the skin of your face and body – personally, we don’t like this side effect, so we avoid supplements containing it.

However, do acknowledge that a few people don’t mind paresthesia, so we’ll never recommend you to avoid this product completely because of Beta-Alanine.

L-Citrulline is a great addition to any pre-workout supplement; it’s proven to enhance your muscular endurance in dosages above 3,000mg per serving.

But here’s the problem – Shatter Ripped SX-7 Revolution only contains 1,500mg of L-Citrulline (meaning it won’t be effective here).

Not only that; we prefer Citrulline Malate (which is Citrulline mixed with Malic Acid), as it provides the added benefit of improved strength too.

If you’re looking out for pre-workouts containing Citrulline Malate – remember that 6,000mg per serving is the optimal dosage for this nutrient.

Caffeine can either make or break a pre-workout; too much can cause side effects such as jitters and crashes, while a good dosage (under 200mg per serving) can improve your strength, endurance, energy and focus in the gym.

MuscleTech should know better than this – Shatter Ripped SX-7 Revolution contains 220mg Caffeine per serving – putting some people at risk of side effects (especially if they’re sensitive to this stimulant).

For this reason, we always recommend that you choose pre-workouts containing less than 200mg Caffeine per serving.

This is a key fat burning ingredient proven to boost your metabolism – when consumed in 3-4 servings spread throughout your day. The problem is this; as Shatter Ripped SX-7 Revolution only provides 1 serving per day, it’s not likely to work.

Ultimately, this is a great example of why there’s no need to create a pre-workout/fat burner hybrid supplement. We recommend that you choose either a specialist pre-workout or fat burner supplement (not a product that tries to do both).

Alpha-GPC is more commonly seen in pre-workout supplements, but it’s more suited to a Nootropic supplement.; it’s known for being a ‘brain booster’, which is able to improve your cognition.

But here’s the worst part; Alpha-GPC has been reported to cause numerous side effects. For this reason, we always avoid supplements containing this ingredient.

If you’re wondering what this is, Grains of Paradise is basically a spice (like a chilli pepper). But this is another ingredient that’s not needed in here (as it won’t work in 1 serving).

Simply put, Grains of Paradise is believed to raise your metabolism – but studies haven’t shown whether it’s 100% safe or effective yet. For this reason, even in a fat burner supplement, we prefer Cayenne Pepper (which is tried-and-trusted).

This is a fairly new addition to supplements in general, which isn’t a good thing.

Why? Answer: Because it’s not proven to be 100% safe or effective yet. Ultimately, your safety comes first, so we can’t recommend that you consume supplements containing Guayusa for now.

For those wondering what this is – Guayusa is basically a simulant believed to offer similar benefits as Caffeine.

But as we mentioned, there’s already a big dosage of Caffeine inside this product – so this only increases your risk of suffering from side effects such as jitters and energy crashes.

A big mistake by MuscleTech here. Yohimbe is one of the ingredients we always advise you to stay away from – to stay safe.

Why? Because Yohimbe has been reported to cause numerous harmful side effects (and we believe this will be banned in the near future anyway).

MuscleTech have given this a fancy name to try and fool you into thinking it’s better than it really is. Simply put, this is edible seaweed (often used in japanese cooking).

As you can imagine, it’s not shown to do much in studies – apart from improve the taste of things such as sushi…

This is a shrub that’s native to east Asia (in countries such as Japan, Korea, and China). But the bad news is that Flowering Quince hasn’t proven to improve your gym sessions or promote fat loss in any study – making it an unreliable ingredient.

MuscleTech might as well have labelled this as ‘orange juice powder’. Yes, that’s all it is…

Simply put, this ingredient might improve the taste of Shatter Ripped SX-7 Revolution – but it won’t improve your gym session or fat loss at all.

The last ingredient in Shatter Ripped SX-7 Revolution, and not a good one to finish on…

Basically, Huperzine A has shown to cause numerous side effects; for this reason, it’s one of the ingredients we always advise you to stay away from.

You don’t want to be suffering from side effects when consuming Huperzine A, so there’s no need to be consuming this ingredient. 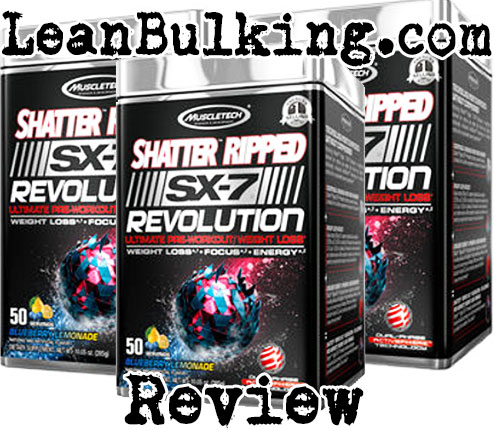 It’s never good news to hear that a supplement can cause side effects. But this is because Shatter Ripped SX-7 Revolution contains potentially harmful ingredients such as Yohimbe, Guayusa, Huperzine A and Alpha-GPC.

Not only that; the overdose of Caffeine can cause jitters and energy crashes, and Beta-Alanine can cause paresthesia.

In case you skipped the last section – Paresthesia is a tingling and itching sensation on the skin of your face and body.

For the price of $79.99, Shatter Ripped SX-7 Revolution isn’t a great choice of pre-workout.

Again, we’ll repeat that there’s no need for a pre-workout/fat burner hybrid supplement (for fat burning ingredients to work, you need to consume 3-4 servings spread throughout your day – instead of just 1 that pre-workouts offer).

In our honest opinion, we don’t believe that Shatter Ripped SX-7 Revolution is worth trying out. Especially when the highest rated pre-workouts and fat burners on the market cost less.