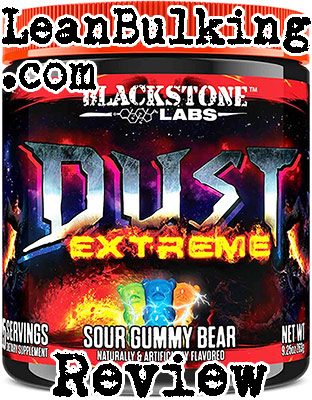 Dust Extreme is a pre-workout supplement made by Blackstone Labs. It costs $54.99 for 25 serving containers on their website (it’s not been released on bodybuilding or GNC.com yet) and comes in 3 flavors – Passionfruit, Pineapple Mango and Sour Gummy Bear.

Anyway, this is the first time we’ve heard about this company, so we’ll find out more before analyzing Dust Extreme’s nutrient profile.

Who Are Blackstone Labs?

We tried finding out more information about Blackstone Labs, but they didn’t have an ‘about us’ page on their website…

But we could see that this supplements company had released some testosterone boosters, fat burners and even protein powders. Anyway, let’s see what’s inside Dust Extreme below…

Dust Extreme contains 9 ingredients overall; this is a good number to have in a supplement, as we believe the best pre-workouts usually contain between 6-9 ingredients.

At first glance; Dust Extreme contains some potentially harmful ingredients such as DMAA and Huperzine A.

But on a positive note, this pre-workout includes one of our favorite ingredients – Citrulline Malate.

Anyway, we’ll take you through each ingredient inside Dust Extreme; so you can see how effective this pre-workout really is.

As we mentioned, this is one of our favorite pre-workout ingredients – because it’s shown to enhance your muscle pumps in dosages of 6,000mg.

But here’s the problem; Dust Extreme only contains 4,000mg (4g) of Citrulline Malate.

Ultimately, this means that this ingredient might be ineffective due to being underdosed.

Beta-Alanine is an ingredient that always splits opinions; it can enhance your muscular endurance, but it also causes a side effect called paresthesia.

What’s paresthesia? Well, it’s a tingling and itching sensation on the skin of your face and body – uncomfortable enough to ruin our gym session.

We realize that some people don’t mind this side effect too much. So we’ll never write a pre-workout off simply because it contains Beta-Alanine.

However, Creatine Monohydrate offers the same benefit without causing any side effect – so we prefer this every time.

This is derived from L-Arginine has is believed to reduce pain and treat drug addition. However, we believe the reason why Blackstone Labs has added Agmatine Sulfate, is because it’s believed to improve your cognition (although this hasn’t been proven in any studies).

Ultimately, we consider this an unreliable ingredient in Dust Extreme.

Also known as DMAE, this isn’t a good ingredient to have in a pre-workout. It’s been added, as it’s believed to improve your focus in the gym.

However, studies have shown that DMAE is teratogenic (meaning it causes birth defects in unborn babies). For this reason, we advise you to stay away from this ingredient (unless you’ve had the snip and aren’t planning any more children…)

Blackstone Labs have really tried to make Dust Extreme good for boosting your focus in the gym; L-Tyrosine is another cognitive booster.

However, as this doesn’t offer any other benefit – it’s more suited to a Nootropic supplement, than a pre-workout. To be honest, Caffeine offers enough of a boost in focus for the demands of a pre-workout supplement.

In case you’re wondering what this is; Caffeine Anhydrous is basically dehydrated caffeine in powder form.

It’s actually one of our favorite ingredients to have in a pre-workout – as it’s proven to improve your strength, endurance, energy and focus in the gym (which are all key benefits of pre-workout supplements).

However, the bad news is that Blackstone Labs has underdosed this stimulant; there’s a HUGE 350mg dosage of Caffeine, meaning it can cause side effects such as jitters and energy crashes.

For this reason, we always recommend you to choose pre-workout supplements containing under 200mg Caffeine per serving – to stay safe from side effects.

Higenamine is part of a plant called Nandina, and has been used in traditional medicine to treat asthma –  and in more recent times, to promote fat loss.

However, there’s been no studies that prove Higenamine actually helps you lose body fat – making it an unreliable ingredient inside Dust Extreme.

Not only that; Higenamine has also shown to cause numerous side effects too.

Also known as 1,3-Dimethylamylamine, this is a stimulant that’s been banned in numerous countries after causing harmful side effects.

For this reason, it’s not really included in gym supplements anymore. In fact, we were surprised to see DMAA inside Dust Extreme.

Anyway, we advise that you stay away from pre-workouts containing DMAA – to stay safe from side effects.

Blackstone Labs haven’t really finished well here; Huperzine A is another ingredient that can cause numerous side effects.

Basically, it’s a cholergenic molecule that’s believed to reduce cognitive decline associated with aging – although it’s not proven to work in enough studies to make it reliable yet.

For these reasons, we always avoid supplements containing Huperzine A.

Dust Extreme contains 6 ingredients that can cause side effects; considering it contains 9 overall, this isn’t good…

Basically, DMAE has shown to be teratogenic (birth defects in unborn babies), DMAA, Higenamine and Huperzine A can all cause numerous side effects that we’ll list below.

And as Caffeine has been dosed at 350mg per serving, it’s likely to cause side effects such as jitters and crashes.

Here’s the potential side effects from taking Dust Extreme:

Ultimately, Dust Extreme is one of the most expensive pre-workouts we’ve reviewed on LeanBulking.com. And to be honest, we can’t see why it costs to much.

Take one look at the potential side effects from taking Dust Extreme – and you’ll see why we chose to avoid this pre-workout supplement.

In fact, we always advise you to stay away from supplements containing DMAA (it was banned for a reason), DMAE and when they contain over 200mg Caffeine per serving.

Due to the potential side effects from taking this product (in our honest opinion), we believe that Dust Extreme can’t compete with the best pre-workouts on the market.