Pre Build is a pre-workout supplement made by MuscleTech. It was released late in 2017, and is priced at $34.99 for 30 serving, making it very reasonably priced for customers.

As MuscleTech have such a great reputation in the supplements industry, its always big news when they market new products.

We have big expectations for this product, so well be analyzing Pre Builds nutrient profile in the next section to see how safe and effective it is (in our honest opinion). But first, well give those new to supplements some more information about the company behind it.

As weve already mentioned, MuscleTech are one of the biggest companies in the supplements industry. Theyve built a great reputation through numerous products, especially their Hydroxycut line of fat burners.

MuscleTech also sponsor some big names such as Lauren Abraham and Abel Albonneti which is good to see. But youre here to learn more about MuscleTech Pre Build, so lets see which ingredients are inside below…

MuscleTech Pre Build contains 11 ingredients, which is on the border of being too much in our opinion; this is because most products that contain over 10 nutrients that weve reviewed have been under-dosed.

This concern is emphasized after seeing that L-Citrulline has been dosed at 1.5g instead of the optimal 3g needed to deliver its best effects (enhanced muscle pumps).

But on a positive note, we can see that there is an optimal dosage of Beta-Alanine and were also happy that MuscleTech Pre Build doesnt contain any proprietary blends; this means you can see the exact dosages of each ingredient inside.

Anyway, well expand on this as we take you through each ingredient in MuscleTech Pre Build. By the end of this review, youll have a good idea of how safe and effective this supplement really is. 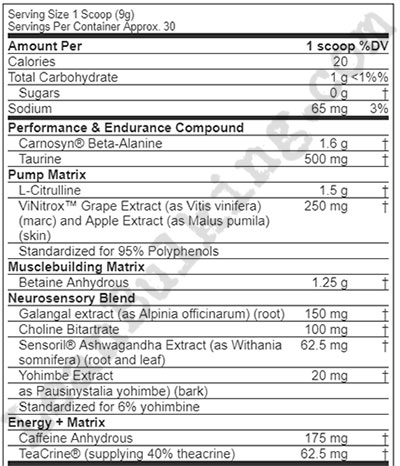 Beta-Alanine is a controversial ingredient, as its both beneficial and can cause side effects; while Beta-Alanine has shown to improve your muscular endurance, its also known for causing itchy & tingly skin.

Personally, we find this side effect (officially known as paresthesia) to be very distracting when trying to focus on lifting weights in the gym. But we know that others dont find it as bad, so well leave it up to personal preference.

Ultimately, MuscleTech have done well to do their research, as well repeat that MuscleTech Pre Build has shown to enhance your muscular endurance in the gym.

Most people know about Taurine, even if they dont know about supplements. This is because this nutrient is commonly found in energy drinks.

However, contrary to popular belief, Taurine is not able to raise your energy levels. Instead, Taurines main benefit is that its able to prevent cramping during exercise.

Simply put, this is a useful benefit, but its not an essential reason youd choose to consume pre-workout supplements. As a result, we consider Taurine to be a good bonus addition to Pre Build here.

L-Citrulline is a great addition to any pre-workout supplement, as studies have proven that its able to enhance your muscle pumps while you lift weights; with this being one of Arnold Schwarzeneggers favorite things about lifting weights, its always a useful benefit.

But muscle pumps do more than just make you feel and look good. Basically, as more blood and oxygen is being pumped into your muscles, you experience less fatigue and muscle damage too.

However, the bad news is that L-Citrulline has only shown to work when consumed in dosages of 3,000mg (3g) or more. As MuscleTech Pre Build only contains 1.5g, its not likely to offer its full benefits here.

In case youre wondering, this is a patented form of grape and apple extracts.

But its more useful than it seems; Grape Extract contains high amounts of nitrates, which enables it to raise your nitric oxide levels and improve your blood flow, resulting in enhanced muscle pumps.

This might be the reason why MuscleTech have added a smaller 1.5g serving of L-Citrulline in MuscleTech Pre Build. However, in our honest opinion, we believe that L-Citrulline is more reliable as its been covered in more studies.

But in all fairness, ViNitrox seems effective, although we dont know what dosage its most effective in.

Betaine Ahydrous has gained a slightly negative reputation for causing your breath and sweat to smell fishy; this is a side effect officially known as Trimethylaminuria, which you can see in this study here: https://www.ncbi.nlm.nih.gov/pmc/articles/PMC3848652/

More bad news is that Betaine Anhydrous hasnt shown to reliably offer benefits to improve your gym session in enough studies. For this reason, we consider Betaine Anhydrous to be mostly an ineffective addition to pre-workout supplements, in our honest opinion.

Ultimately, we would have preferred MuscleTech to have added more useful nutrients such as Creatine Monohydrate instead (which is proven to boost your strength and endurance levels).

Well hold our hands up here, as we dont know much about Galangal Extract; this is because its not commonly added to pre-workout supplements or other products in the industry.

After doing our research, we found that Galangal Extract is believed to improve your digestion and even prevent cancer.

Now, there arent enough studies to prove whether it works or not, so we cant determine how effective Galangal Extract is in MuscleTech Pre Build. But personally, we would have preferred to see a tried-and-tested nutrient such as Creatine Monohydrate instead.

Choline Bitartrate has the same problem as Betaine Anhydrous; its been commonly reported to cause fishy breath and sweat after consumption (see study weve included in the Betaine section for more info).

Basically, Choline is added into pre-workouts as its believed to improve your brain function and support healthy energy levels. But if youre looking to increase your energy levels, then Caffeine Anhydrous is the best nutrient to consume.

Ashwagandha is an interesting herb thats been used for decades in ayurveda (Traditional Indian Medicine). Its shown to have slightly positive effects on your strength levels, which can improve your gym session.

However, if youre looking to have noticable effects on your strength levels, Creatine Monohydrate is a more reliable option.

Yohimbe Bark Extract is the worst ingredient in MuscleTech Pre Build in our honest opinion. This is because its commonly reported to cause numerous side effects including anxiety and nausea.

Why? Because Yohimbe Bark Extract contains a chemical called Synephrine, which has been banned from being directly added into supplements.

Basically, companies pass through a legal loophole by adding Synephrine indirectly through Yohimbe Bark Extract, as this hasnt been banned (although we believe it will be banned from use in the future).

So what does it do? Well, Yohime Bark Extract has shown to have slightly positive effects on fat loss. But theres no point risking your health when there are safe and effective fat burning nutrients available such as Green Tea Extract.

In fact, if your main aim is to lose body fat, then youll benefit more from using fat burner supplements.

We mentioned briefly before that Caffeine Anhydrous is the best stimulant to consume when aiming to raise your energy levels.

Well, this is because Caffeine Anhydrous is a pure form of caffeine; its actually caffeine dehydrated into powder form so it can be added to supplements, which is why its called Anhydrous.

The good news is that MuscleTech Pre Build contains 175mg, so you should be safe here.

If youre wondering, this is a patented form of Theacrine, which is a stimulant similar to Caffeine thats able to raise your energy levels.

Ultimately, we advise you to choose pre-workouts that contain only 1 source of stimulant to avoid risk of jittery side effects. 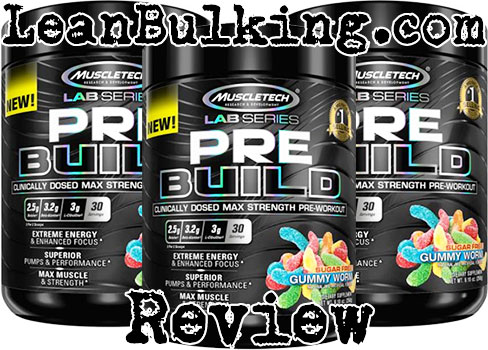 The majority of MuscleTech Pre Builds ingredients are free from side effects. However, there are a few that raise some concerns, such as Yohimbe Bark Extract and the fact this pre-workout contains 2 sources of stimulants.

In quick summary; Yohimbe Bark Extract has been reported to cause numerous side effects including nausea and anxiety, while consuming more than 1 stimulant can raise your risk from suffering jittery side effects.

Heres the potential side effects from taking MuscleTech Pre Build:

We might sound like weve been critical of MuscleTech Pre Build. But remember that were an expert review site that analyzes everything about each supplement we review.

There are actually many positive things about this pre-workout supplement; we especially like that it contains L-Citrulline and a sensible dosage of Caffeine Anhydrous.

However, things you cant ignore are that MuscleTech Pre Build also contains potentially harmful ingredients such as Yohimbe Bark Extract.

Bottom Line: While MuscleTech Pre Build is a very respectable product from one of the top supplement companies in the industry, we personally dont believe it competes with the highest rated pre-workouts on the market.

See The Best Pre-Workouts This Year!